Match Track
7am Sunday morning and I'm scraping Jack Frost from the windscreen of the car ready for the early morning trek to mighty Histon.

It's at times like these when even the most diehard fan begins to question his sanity but buoyed by the prospect of disposing of the part timers from Histon and progressing to the enticing 3rd round coupled with the promise of a full English breakfast at The Boot Inn in Histon I stuck to the task manfully.  I suppose nervous apprehension best describes the atmosphere in the car as with the Happy Chocker on board we picked up the Wakey warriors en route for Cambridgeshire.  That apprehension was built on our worry over the frailty of the Leeds back four and the knowledge that Histon's style was very very direct to say the least.................so we went round in circles discussing which is the strongest defensive permutation we have only to conclude that, as debated many times before, until the holy grail of the January transfer window comes we will have to grin and bear it.Turning into Histon off the A14 we blinked and missed the compact ground and continued onto 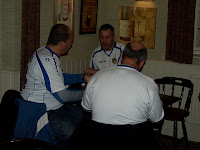 The Boot Inn for our appointment with a Full English and to meet up with fellow 606er's Jonty64, Walsall white & LUFC 4 life....................little did we know that the best bit of the day was about to be eaten washed down with some strange local brew.  The fabled magic of the cup was evident in the pub as fans mingled and chatted excitedly about the forthcoming game.
With the hearty breakfast finished we set off to walk through the village to the ground.  It was all a bit surreal as it seemed we'd stumbled onto the set of the next Midsommer Murders episode rather than walking to a Football match.  Once inside the ground the "compactness" of the Glassworld Stadium was there for all to see and although it ticked all the boxes for the well worn FA Cup cliches it was clear that this was going to be a tough test. 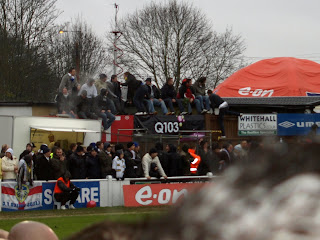 The test began to get tougher even before the teams got on the pitch as the rain increased and small puddles started to appear on the turf.  You could feel John Beck rubbing his hands at the prospect of the paddy field like conditions slowing down Leeds' passing game and helping his "knock every ball down the channels" tactics.
And so it proved to be so as at every opportunity Histon chased and harried Leeds forcing error after error.  Rui had started at the side of Lubo in defence with Sheehan back at left back and this seemed to stiffen our resistance at the back but after what seemed like the 100th set piece, throw in or corner, Histon pinched the inevitable goal as the centre half headed in unchallenged from a corner.  I don't think there were that many in the large travelling army of fans who were that surprised at the goal as we have seen too many of a similar ilk fly into our net already this season.  The fans were in boisterous mood throughout the 1st half, at one time causing some ITV executive to have a coronary when the sound boom was stolen and passed around behind the goal..................cue a chorus of "ITV are F****** sh**" into the exposed microphone.........then a few verses of the Match of the Day theme just to rub salt in the wounds.
Half Time arrived with Leeds still one down and the rain continuing to refresh the crop of rice on the Glass world pitch.  As Leeds turned round to attack the majority of their fans behind the goal there wasn't too much to inspire the crowd as Leeds became more bogged down in the wet conditions.............then a bit of hope as the unfortunate Robbo left the field injured to be replaced by big Enoch.  He along with Howson sparked some life into Leeds and they launched a final assault that at times resembled the Alamo but despite two fine efforts from Lubo it all came to nothing and the headline writers got their dream result as the part timers from Histon felled the once mighty Leeds United.

So another frustrating walk back to the car with a that awful feeling that accompanies a loss especially to a non league team.  The pouring rain did nothing to enhance my gloomy mood as I pondered a million whys?
Why can't we defend set pieces, why did we still try to play an intricate passing game on a paddy field, why does losing hurt so much,why didn't Enoch come on sooner or even start, why do people talk about the magic of the cup when it's anything but magic to most teams, and so and so on ...............................
Understandably the car was quiet for the first part of the journey home as we all contemplated the "ups and downs" of following Leeds.  These are fast becoming dark days at Leeds and we are in real danger of leaving ourselves too much to do post Xmas unless we resolve our inconsistency and fast.   One thing for sure the Happy Chocker's cat is in for another kicking tonight.
Tranmere on Saturday away...........please god let us win.
MOT

Posted by Andrew Butterwick at 19:35