A bright but frosty morning greeted the Happy Chocker, the Quiet One and yours truly as we assembled at Selby station for the cross country trek to deepest Birkenhead for our clash with Tranmere Rovers.  Vaughan and Aidey joined us on the train together with an impressive supply of cans for the journey.  Vaughan was clearly thirsty!
The usual optimism amongst our merry gang was not as evident as at earlier season games due to the traumatic results of the last two weeks.  It wasn't just the results though it was the manner of the defeats coupled with the fact that not only were we without Beckford and Robbo, the mercurial Delph was also sidelined due to suspension.
However during the train journey my mind was diverted from the difficulties of the impending game by picking up more knowledge to add to my ever increasing library this time on the subject of snuff and tobacco.  The thirsty Vaughan gave us a masterclass in the art of taking snuff and chewing "baccie", a common pastime of colliers to negate the absence of nicotine during their long shifts underground.  He even persuaded the just as thirsty Aidey to try the snuff which he did with added vigour.  Much as I am sure that Aidey enjoyed the aromatic snuff I wasn't sure how he was going to explain the strange brown marks on his hankie when he got home after having  a sneezing fit after the umpteenth snort of the poor mans coke! 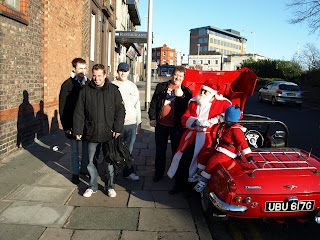 Once we arrived at Birkenhead we were amazed to find the one and only Santa Claus at the side of the road bemoaning his broken down transport, a shiny red  sports car.  We sidled over to see if we could offer our assistance trying to hold back the instinctive laughing.  After establishing that none of us new anything about car engines we raided his lolly jar, wished him a Merry Xmas and continued on our way.
In search of some pre match refreshment we broke the twenty minute walk to the ground at the first pub we passed, The Lawton.  Now it was obvious the minute we stepped through the door that  this wasn't the best choice of pub we've ever made.  You could almost hear the chatter stop as numerous pairs of scowling eyes turned our way to eyeball the newcomers who had stumbled onto their patch. With a cavilier spirit we still ordered our drinks and enjoyed a well earned pint before wisely moving onto the aptly named Prenton Park pub.  It was here that my faith in the rule that most genuine football fans just want to debate football issues with fellow addicts of the beautiful game rather than knock seven bells out of them just because they support a different team as I whiled away an enjoyable ten minutes  discussing the match with two scouse fans.  The pub had been taken over by weight of numbers of Leeds fans including Nelly who came to offer his pre match views.
I suppose I must mention the game although this bit will send me into the depths of depression....................it all started so well as big Enoch bundled in an early goal to give us the lead and send the large away support into raptures. 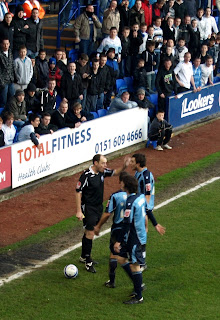 This should have been enough to settle any post Histon blues bit it was not to be and the play remained fairly scrappy with no team really taking the initiative.  So it was no surprise that Tranmere equalised from an inevitable set piece to take the teams in level at half time.  Leeds had been disjointed and ineffective in the centre of midfield and the mood was not good as we went through our HT rituals. 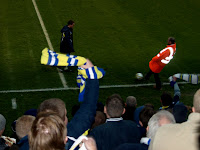 In an attempt to boost morale the Leeds hordes started a 20 minute rendition of "We are the Champions" that even had the Leeds subs responding with surprise at both the length and volume of the tribute.  The optimism that was generated soon disappeared though as the lively ex Leeds player Ian Moore latched onto a loose ball and hit a sweet shot from 25 yards to put Tramere back in front.  Now although Leeds never let their heads drop and chased and harried all afternoon they never really troubled their keeper which is becoming a worrying trend.  Their passing was far too pedestrian to break down a resolute Rovers defence and this was compounded by a bizarre performance by the referee who managed to annoy the whites fans nearly every time he blew his overused whistle.  But although the Leeds fans chorused "2:1 to the referee" as the game ended that wasn't the full story. 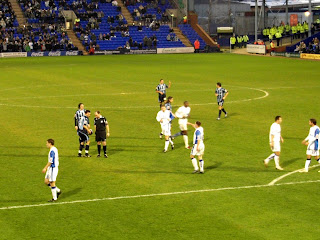 We had failed to create enough decent chances, excluding a disallowed header from Becchio, to beat an average to fair Tranmere team............not the form of a team with promotion aspirations.  Gary Mac has a lot of work to do before the January sales to ensure we are still in the promotion pack and with tough games against MK Dons (Don Revie is turning in his grave) and Leicester in the coming weeks these are indeed dark days for Leeds.
So the long trek home, disrupted by a fire on the Wirral tube, was made with a dark cloud hanging over our party.  The Happy Chocker was less than happy and was even contemplating not going to the final phase of away games.....................you can't blame him really because we really have reached a low point in terms of performances.  As my choice of match track indicates we are indeed in the midst of a bleak mid winter!
MOT

Posted by Andrew Butterwick at 10:04