The Happy Chocker and his brother Chris picked me up before we made a detour to pick up big Andy in Brayton and we were on our way.  The chatter in the car switched between matters Football and the reason for the Happy Chocker's mega hangover, last nights bender with Big Andy..............needless to say sympathy for HC was at a premium and there was even talk of not making the traditional curry on the way home......things must be bad!The grey weather didn't dampen our spirits as optimism filtered through our discussions so by the time we were heading for the members bar for a pre match snifter everyone in our party was in a positive disposition with regards the mighty whites chances this afternoon.  The team announced held no surprises with Dougie filling in at RB allowing a midfield pairing of Killa and Howson with Delph and Robbo out wide.  Snoddy started up front with the returning talisman Jermaine Beckford.  The buzz around the ground as the teams entered the Arena  did justice to the importance of this clash of two teams with play off hopes.  Scunny had brought a decent following so all was set for an exciting afternoon.The match got underway at a frenetic pace and it soon became clear that this was going to be a battle of two quality strikers.  Hooper, Scunny's star man, soon showed why he's scored the vast majority of their goals this year as he caused major concerns in Leeds' defence and at the other end Beckford looked as sharp as ever and keen to impress against the team he played for not two seasons ago.  The opening exchanges were scrappy and fraught as each team vied for control.  Scunny were much the more physical team often muscling out our rather lightweight midfield but when we did get our foot on the ball we showed some nice touches through the hard working Snoddy ably supported by Robbo, Howson and Kilkenny.  Robbo soon retired with a pulled hamstring though giving Bradley Johnson an unexpected chance to shine. 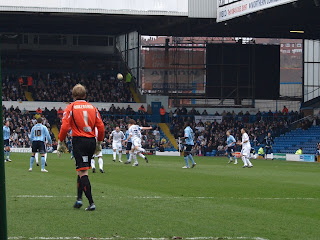 The match had plenty of hustle, bustle and lots of endeavour but little subtlety or class and just as HC and I were beginning to think stalemate the game burst into life.  Leeds worked the ball well on their right for Hemingbrough's finest, Jonny Howson, to break free and feed a near post ball for Beckford to plant firmly into the net via a feeble attempt by the Scunny goalie.  The celebrations in the kop were a mixture of surprise and relief but that didn't matter we were 1 up in the first crucial match of the weekend.  Suddenly the Happy Chocker's hangover was disappearing as fast as you could say "get in"  Leeds picked up the tempo and were now causing The Iron real problems and before long we were 2:0 up courtesy of a deflected Bradley Johnson shot from a short free kick....................heaven.
The crowd responded and found their collective voice to urge Leeds forward.  The initial threat from Scunny had disappeared and some of their heads even started to droop.................C'mon Leeds let's go for the jugular!!!!!!!!!! 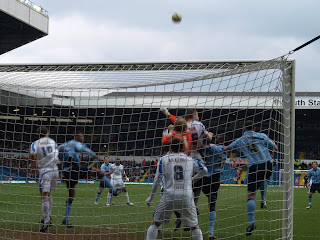 The rather large thud just before half time was us crashing back to earth after a horrendous mix up between Casper and Ben Parker allowed Hooper to pull a goal back for the visitors.  The silence in the kop was deafening............why do we always do things the hard way?
Half time came with no more goals and what should have been a standing ovation for a team 2 goals to the good was rather more polite than rapturous.  The consensus around us was that the second half would definitely bring more goals.........we just hoped they would be in the goal in front of the kop and not the other end.
As the final 45 minutes got under way the balance of the game swung Scunny's way as they made the best of their now mid field superiority and our worst fears materialised when yet more slack defending allowed space for the ever dangerous Hooper to net the equaliser.  Scunny surged forward under encouragement from the away contingent, who had now found their voice, and Leeds were definitely on the ropes.  Kilkenny was withdrawn to be replaced by Trundle allowing Snoddy to drop into midfield in an attempt to beef up our middle four.
The substitution did steady the ship somewhat but we were still rocking and I would definitely have taken a 2:2 draw at this point, so would my fingertips that were now somewhere between my elbow and wrist!
The Scunny goalie then made a big error.  Beckford was flattened in midfield and rose angrily gesticulating in his petulant manner to all and sundry earning him a dressing down from the ref.  The goalie gave a mocking impression of Beckfords strop, not exactly endearing himself to the baying Kop, and putting himself under even more pressure.  The stewards sprung into action, another chance to show their authority, herding the more vocal fans back to their seat before they lynched the niave goalie.  Now for me he was on a loser from there on in and when the wronged Mr Beckford planted the winner past him not 10 minutes later the ground erupted and as the initial cheers died down a smirking "3:2 it's your goalies fault" rained down on the Scunny No 1. 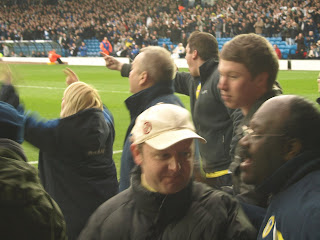 As we wrested control back from The Iron with the help of the goal I began to think that we just might have done enough to climb back into the play off places................but once again the game took a twist as an eager Howson launched himself into a careless sliding tackle to pick up the inevitable 2nd yellow and off he marched to the dressing room leaving his team mates with an up hill task to keep out the hungry away team.
It was at this point that my watch not only stopped but started going backwards as by hook or by crook we held on for dear life.  Casper redeemed himself for some of his errors with a superb save from a searing 20 yard shot.  It was all hands to the pumps and I thought a Scunny goal was inevitable.  We were catching them on the break though and if Beckford had been more aware of his onside position he could have wrapped the game up but it was not to be.  The unlucky Trundle was removed to allow Lubo to come on the shore up the creaking defence for the last 5 minutes.  The 4th official raised the board to that there was to be 4 minutes injury time..............by my reckoning we seemed to have already played for 60 minutes in the 2nd half and I wasn't sure I could last another 4 never mind the team.  The new found guts, grit and determination shone through and we held on until the most welcome sound of the afternoon as the fussy referee blew his whistle for the last time.  Brilliant.
In the end it wasn't a classic but the tension and excitement generated by the game was at times unbearable and well worthy of higher than Div 3 billing.
So the first installment of the weekends mission to secure 6 points was accomplished, at times I'm not sure how, but the resilience of the team shone through today as did the inescapable fact that the goals that Beckford scores are priceless to Leeds..................we need to keep him free of injury and suspension if our season is to finish on a high.
As we passed the Scunny coaches heading back to Lincolnshire the Happy Chocker was merrily ordering his Chicken Jalfrezi with rice from his favourite indian restaurant in Selby..............amazing how an afternoon of shouting and nervous tension can get rid of the worlds worst hangover!
Roll on Monday night and dare I say it another 3 points? C'mon Leeds.

Posted by Andrew Butterwick at 18:03