Murder and mystery were in the air as the Happy Chocker, brother Chris and I set off for Cheshire.  Now I live in what can only be described as a sleepy village so to find out that a body had been fished out of our canal yesterday had sent the village jungle drums into overdrive.  As we passed over the bridge where the gruesome find was made the scene resembled something out of the latest episode of Morse.  The victim was apparently brutally murdered before being dumped in the canal.  Confirmation on the midday national news that it was a murder sent a spine tingling chill through the car......................well it at least stopped us discussing our chances of making the 2nd automatic promotion spot for a couple of minutes.  Back to the football chat and a confident optimism was the order of the day in the car borne out of recent commanding displays by the mighty whites.  Speculation over how Liam Dickinson would perform up front instead of the suspended Beckford focused on the worrying fact that Leeds had won very few games without the help of JB's goals this season and we would need an assured performance from our new recruit. Once we left the spring like sunshine in Yorkshire and descended into the grey murkiness of Lancashire we spent the rest of the journey meandering through topics ranging from The Damned United to why when the Welsh countryside is picturesque are the natives so hostile to any English who stray across the border. 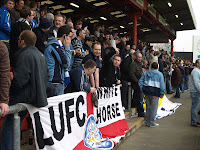 Its a bit like visiting Bermondsey.  Pre match refreshment was taken in the Crewe Arms along with a healthy contingent of fellow whites, including the Wakey Warriors.  Buoyed by the inevitable pints of hearty ale we entered that wonderful pre match period when we think anything is possible, well at least I do, so predictions of a 2:1 win to Leeds and slip ups elsewhere drifted above the chatter as we made our way to the ground.  Leeds fans filled two of the stands as the match got under way.  Now Crewe are on a good run of form and you could see why in the opening exchanges as their no nonsense approach came to the fore.  Leeds settled the better though and were soon knocking the ball about with assured confidence. 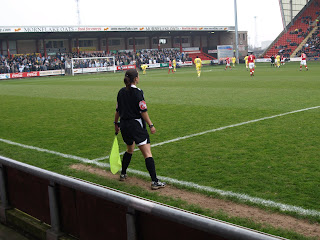 The nerves in the stand were beginning to settle as Killa, Snoddy, Howson and Delph all looked lively in the Leeds midfield.  Something was not quite right though........................I noticed the linesman running the line in front of the Leeds fans had a rather nice shaped bum and a waved his flag with a rather girly flick............just as I was beginning to think I was having unnatural thoughts about the linesman the Happy Chocker pointed out that the linesman looked like a girl because she was a girl!  Strange hobby for a girl but each to their own.  Just as I was feeling a tinge of sympathy for the girl in having to run the line in front of the unforgiving Leeds fans she suddenly played a major role in the game.  The Crewe full back appeared to catch Snoddy with his arm, felling him. 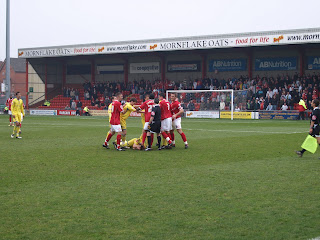 The ref immediately reached for his yellow card and the usual argument commenced with the Crewe players indicating that Snoddy was play acting.  As things started to calm down the Crewe man thought he'd give the lineswoman the benefit of his full vocabulary explaining that he had been wronged...............she immediately reported him and the ref's red card signalled the end of his game.  Things were getting better, 15 minutes gone of the game and we were on top and they were down to 10 men........magic!  And it soon got oh so better as first Kilkenny, followed by Becchio and then Snoddy got three goals in a matter of 6 minutes.  3:0 up against 10 men and barely 30 minutes gone. Unbelievable..................and as we knocked the ball around the park Crewe were left chasing shadows for the rest of the half. 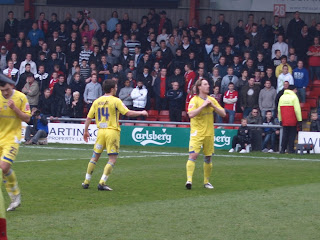 If it was a boxing match the ref would have stopped it before the half time oranges.  One thing for sure Leeds murdered Crewe in that first half.
There was only one topic of conversation over the break and that was how many would Leeds get in the 2nd half............I had to pinch myself to make sure I wasn't dreaming.  The day couldn't get any better but it did as the HT score from Craven Cottage showed Manure were losing 2:0.
Even we couldn't mess this one up could we?  I mean 3:0 against 10 beaten men?  Nah impossible the 2nd half will be a stroll in the park.
How wrong was I?
Crewe came out with all guns blazing and after reorganising their formation that was clearly over run in the first half they started to look more of a threat.  Leeds were still bossing the game when we had the ball but with Lubo replacing Rui at the back we looked just a little wobbly.  Still even if they did get a goal back they were never going to get three were they?
Even though Leeds still had a good amount of the play we didn't convert any of the chances and this fan was slowly fearing the worst.......................and of course it came as what appeared to be free header, where's Rui when you need him? sailed into the Leeds net.  Buoyed by the glimmer of hope that success had given them Crewe piled forward leaving only 3 and at times 2 at the back as they strained to get another goal that would have Leeds panicking.  Sure enough they got it with just over 15 minutes remaining and although Killa was clearly fouled in the build up the goal was coming.  HC and I could barely watch as incredibly Leeds were now hanging on for dear life.
Their cause was not helped by chances spurned to kill the game off by Grella (on for Dicko), Snoddy and Becchio.  At the other end Crewe were given a free kick when Snoddy stupidly climbed all over an attacker on the edge of the box.  The majority of the Leeds fans had their heads in their hands as they prepared to take it.  A perfect free kick was superbly turned away by our flying Danish keeper to keep the game at 3:2.  The tension was now unbearable and the floor was littered with chewed fingernails as the game entered the final minutes.  As we broke away yet again Becchio was hauled down from behind as he lined up to shoot................penalty.  No the ref bizarrely waved play on much to the furore in the Leeds stands.  The final whistle never sounded so sweet as it signalled a valuable away win for Leeds and another 3 points but we don't like doing things the easy way do we?  Talk about a game of two halves this was the ultimate cliche game. 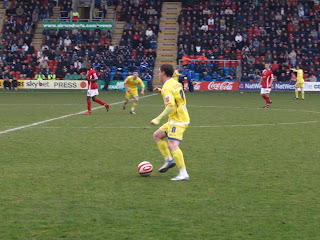 Dicko had a reasonable game up front before he tired and Grella tried hard for his 20 minutes.  Kilkenny again was superb in midfield with the only surprise when he was replaced by Johnson with 10 minutes to go?  Delph was back to his best with some surging runs from midfield and the defence held out well under pressure but once again Lubo looked a liability to me.  Casper made up  for some indecision in both Crewe goals with two match winning saves near the end.  All in all a fantastic game of football from two teams going hammer and tong at each other for the full 90 minutes.  Our unbeaten run now extends to 8 games and with the Franchise Dons due at ER on Saturday an electric atmosphere is guaranteed.
Funny old game football...........how can you go from 3:0 up and cruising to hanging on for dear life in the space of 45 minutes?
Back in the car news that only Oldham and Stockport had lost and that Sweeney's 2 goals for Hartlepool against Millwall had been wiped out in the 2nd half didn't dampen our mood.......after all we've not won that many games away from home this year so just maybe we've hit winning form at the right time.  Time will tell.
MOT
Crewe 2 v 3 Leeds

Posted by Andrew Butterwick at 19:42

Firstly no gripes from an alex fan about you winning, you scored one more than us , simple as that.
As for LUFC fans deciding that they wanted to watch the game from the Crewe side thats up to them, but I have to comment on unnatural feelings towards the linesman/assistant/little girl.
On our side of the ground the feeling were natural towards her and the fool in the middle...violence simply ! God they were awful and really balls up what seemed to be looking like a decent game. MK next ,do you want us to beat them ?

Crewe fan
Thanks for the feedback. from where I was stood I don't think your man could have any argument about the red card. He felled Snoddgrass and then hurled a load of foul mouthed abuse at the linesperson.
I agree with you on the officials though. The ref was poor all afternoon giving bad decisions on both sides. But what a fantastic game. As for Tuesday I think you could upset the franchise team if you play like you did in the 2nd half today.
Good luck the rest of the season.
MOT

Great and funny report as usual MOT, thanks.

Sounds like the first half was great from our side. I was wondering how it all went funny in the second half until I saw Lubo on at half time. Was Rui injured or just rested?

Still, its 3 points and a good lesson. And we won the Grand Slam too, lol...not a bad weekend after all.

Cheers Peter,
I don't think Rui was injured I think he was just giving Lubo a run out..........but I bet Rui has now got a "strategic" injury to cover the embarrassment of possibly Larry's first substitution mistake of his reign! Lubo didn't do a lot for my blood pressure though.
Congrats on the Grand Slam....that was nearly as tense as Gresty Road lol
MOT