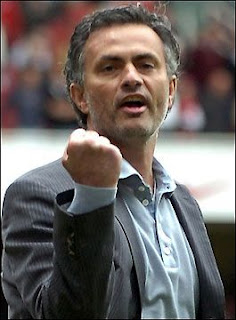 Jose Mourinho managed to contribute something to Comic relief (Do something funny for money) this week when he slotted some obnoxious Manure fan after his side's defeat against the Salford Yanks. Given that his side had just exited the Premier European club competition I think it was an admirable gesture on his part to remember the Red Nose charity even in his darkest hour. Well done Jose!  There will always be a bottle of the finest Italian red waiting for you at Elland Road from now on. It's been quite a week for Comic Relief though...........Snoddy and Becchio made their contribution on Tuesday night as they tussled over who was going to take the penalty kick like two boys in a Junior school playground and in Cheshire the boys in blue were making their considerable contribution when they arrested and handcuffed Everton's jet black striker Victor Anichebe for acting suspiciously, or what you or I would call window shopping, outside a Jewellers in Knutsford. The full and wholesome apology that followed was a joy to behold.   Finally in the spirit of Comic Relief the Airport security men at Bristol airport confiscated a tube of toothpaste and aftershave from a man boarding the plane to Inverness but failed to spot half a dozen live rounds of ammunition in the pocket of the competitor in a Clay pigeon competition.  You can have someones eye out with that toothpaste you know! 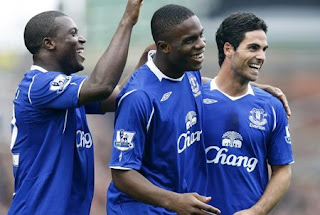 Before I go on I have an apology to brother Chris and Welly who diligently discovered that Millwall didn't take 70000 fans to Wembley as the club who took the highest number of fans to the iconic stadium (See the Yeovil report)..........it was either 42,000 or 49,000. Sorry guys I hope you didn't spend too much time looking it up!
Swindon Town arrive at ER tomorrow having won only 7 of their 35 games this season whilst Leeds are looking to chalk up a 7th consecutive win at the Theatre of Frustration.   So common sense would tell you that we should have a comfortable afternoon and winkle out another 3 points for our promotion fund. Certainly on the evidence of the last two games and the new found confidence in the white's play Swindon will return to the West country the same way their neighbours from Yeovil did on Tuesday.....pointless. 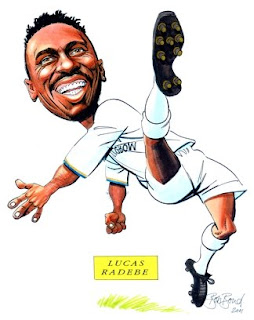 Lee Trundle returned to Bristol City this week after his loan period ended. The move never quite worked although his goal at Brighton was the catalyst we needed to push on and secure a win that by the end of the season could well be of massive significance. He has undoubted talent and skill on the ball but his lack of pace and mobility restricts his usefulness in the hard working league we are in. We also heard the sad news this week that Lucas Radebe won't be joining the crowd at ER this week due to his father's death. He's had a very difficult year and I'm sure he will still be in most fans thoughts come kick off tomorrow. The team for Saturday should remain the same regardless of who may be returning from injury. Clearly Dougie wasn't best pleased when he had to fill in at right back but he is flourishing in his unaccustomed role whilst the centre midfield partnership of Howson and Kilkenny goes from strength to strength. So I might even be tempted to have a flutter on Leeds continuing their good run with a 4.1 victory, I know Wizzy thinks this will jinx them, that will keep the whites nicely in the play off picture. 2nd spot seems a step too far to me but if we keep picking up 3 points who knows?  What we need now is a steady hand at the tiller as we negotiate the choppy waters of the final run in of the season and on the eveidence so far we certainly have that with Larry.  How does the saying go "If you can keep your head while all around are losing theirs......" exactly.
Finally I would like to thank the record number of readers who have been on my blog this week and especially those who voted on who they think will be the most successful person out of the current team in 3 years time.  Not surprisingly Delph topped the poll with 59% of the votes with Larry 2nd (21%) followed by Snoddy (14%) and JB on 4%.
MOT

Posted by Andrew Butterwick at 08:04