The answer to the teaser in my last post was that it is 43 years this week since England won the World Cup at Wembley. 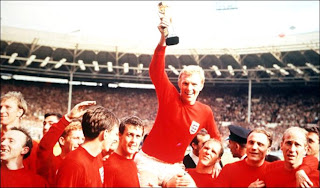 I am sure a large majority of blog readers aren't old enough to remember watching the triumph in the flesh but everyone knows the story, Hurst's hat trick, the goal that never was and Nobby's Wembley jig. Even now when I see the grainy black and white pictures of the match I am immediately whisked back to my young childhood and that warm July afternoon when huddled round a small black & white TV I watched history being made. First the disappointment of having victory snatched from our grasp with the last kick of the 90 minutes by the sneaky Germans, or West Germans as they were then. Then the ecstasy of seeing England come strong in extra time and finally dispatch the Hun by 4 goals to 2. Nobby did his jig, Big Jack sunk to the turf in disbelief and big brother Bobby cried, well he did play for scum didn't he? Magic. I couldn't imagine then but nearly 50 years on and that remains the one national team success I've seen in my lifetime....................but each time a new tournament comes round we will be whipped into a national fervour, me included, so that we genuinely believe we can the Euros/World Cup or whatever only to end up bitterly disappointed as our heroes fail gloriously again.
The reason I raise our one and only national triumph back in the days when "Dirty Leeds" were just starting out on their halcyon decade of defining success is because we are at the start of a league season that will end as the next World Cup kicks into life in far off South Africa. England will undoubtedly clinch qualification sometime this autumn or at the latest Spring and we will be on the emotional rollercoaster once again. Of course Irish, Scottish, Scandinavian, Australian, USA and other nationalities of Leeds fans will have a slightly different take on this thought of course. One thing for sure is that who ever are triumphant on the domestic front in a World Cup year tend to have a short lived time in the spotlight.
Interestingly, (I know this is a bit Roy Cropper) back in 1966 Liverpool were the champions with the mighty whites runners up and our opponents tomorrow, Burnley tucked in 3rd place. 6 years earlier Burnley had actually won the Championship as they themselves were in the middle of their most successful period led by their chairman Bob Lord. As befitting of the time Bob Lord was your typical Football League chairman. A butcher by profession he lauded over his beloved Clarets in an autocratic but successful style that saw relative success for the backwater Lancashire town. Success didn't last long though and Burnley soon were relegated, briefly reappearing in the 70's when a certain Yorkshire Radio commentator, Mr Gray, scored an iconic goal against the hapless Lancastrians (Thanks to Hampshire Whites for the video)

So it's to Turf Moor that Leeds go tomorrow to wrap up this seasons preparations on the back of improving performances against Blackburn and Newcastle. Shane Higgs has thrust himself to the fore for the starting jersey against Exeter through his commanding stints between the sticks and Patrick Krisnorbo looks an able back up for Bam Bam at the back. Fabian is purring in midfield as his transfer fee increases with each game, unfortunately I will be surprised if he's still wearing the Leeds badge on his shirt come September. If anything Becchio and Beckford look better than last year up front and Bradley Johnson and Snoddy look threatening on the flanks. So all's looking good for Leeds in what will be a tough league this year with strong challenges expected from Uddersfield, Norwich, Charlton, MK Dons, Millwall with dark horses coming from Brighton, Brentford and possibly Southampton...................just over a week to the start. Can't wait.
MOT
Posted by Andrew Butterwick at 08:22

Hi fellow white,
It is time to contact you by email, i did this by text on the day of the Hereford, when you were offering tickets.... yes its me from Qatar, and cannot wait for the season to start, i think this year we shall run away with it. One view i do have, and i would like your opinion, as you are a true leeds supporter who does not miss any games, and that is....Bradley Johnson at left back and let Larry make history like Sir Don did with Terry Cooper, i do not see many games as you can understand, but the ones i do see(the lads were on the box here 3 times last year, plus the games i go to when in uk)Johnson has caught my eye.
I have supported leeds for 42 years and was lucky to be around in the glory days, i am 53 years young and as enthusiastic as ever. Good luck to the lads MOT

Thanks for the comments.
Johnson played well in central midfield today, his preferred position. i think regardless of whether Delph is still with us johnson will settle in the central midfield position for the season at the expenses of Howson.
things are looking good though!
Cheers
MOT

Hi MOT
It is only a question of time before Delph goes, we are looking strong in midfield, take the money and run, this in turn shall allow the team to settle down and win the league
Cheers
MOT