Matches come thick and fast at this time of the season so I'm on my travels again tomorrow to Walsall, that's after going to Newark, then Selby, then Leeds then Selby then Walsall. If it all works out HC, The Quiet One, Beefy and I will get there for kick off. The present Mrs MOT thinks I'm mad.......................if Leeds start as ineptly as they did on Saturday I might find myself contemplating agreeing with her! But that's not going to happen because Larry will have beaten the rustiness out of the team at Thorp Arch today and the mighty whites will be firing on all guns. I wonder if he's going to stick with Hughesey at left back? His inadequacies in that position were masked against Wycombe only because of the roasting Jason Crowe was getting on the other wing. Not only is he vulnerable defending against any half decent winger but moves are breaking down going forward because he always cuts back onto his right foot when there's a chance to cross with his left. Anyhow full back rant over. 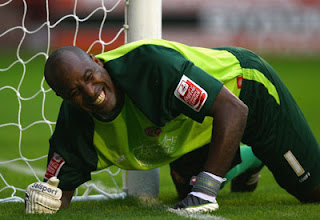 Walsall have made a reasonable start with a win and a draw and I'm sure will provide a stern test at The Bescott as they did last season when we succumbed 1:0 to a well drilled and energetic team. Clayton Ince, their goalie with a sense of humour, was not laughing on Saturday when he gifted Sarfend a goal with a howler that Gary Sprake would have been proud of...............hope he's as generous against Leeds. The wire is also buzzing with accolades for Walsall's new star, 18 year old Westlake, who plays at right back gaining rave reviews for his performances so far..............................Mmmmmm transfer window's not closed is it?
The cautious part of me suggests a point would good to bring back up the M1 but my heart says we will win 2:0.......................well you've got to be positive haven't you.
I'll be giving the Tweets a go again tomorrow and I'll be on the look out for more Leeds flags to photo for the flag of the week feature.
MOT
Posted by Andrew Butterwick at 22:05