Long trek is on the cards to Essex for the game with Colchester. At least this time I know what to expect with the car park chaos at the end of the game after last seasons "Great Escape" impression.
The U's are a team in upheaval at the moment and have already experienced more ups and downs this season than a lift operator at Canary Wharf does in a normal week. First they flew out of the blocks and demolished the Canaries 7:1 in their season opener only for the vanquished team from Norwich to return and poach Paul Lambert, their talented manager. Who said Delia's not ruthless? If that wasn't bad enough Mr Lambert then raided his ex club like a vulture returning to a piece of juicy roadkill to strengthen his new team. Who says there's no honour in football? Despite all these disruptions they are still handily placed after 3 wins and a single defeat in their league campaign. Leeds should be too strong for them tomorrow with an unchanged side from last weeks demolition of Tranmere although both Snoddy and Becks picked up knocks against Watford in midweek. 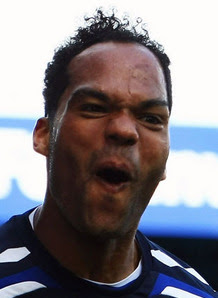 I couldn't let the week pass without a comment on Sol Campbell's move to Notts County...........clearly he's gone for good footballing reasons ie they're paying him shit loads of money to play for a nondescript team in Division 4. I still can't understand why the Middle East money men bought the Magpies in the first place? Maybe they were slightly mislead in that they thought they were buying a team whose nickname is the Magpies and play in black and white stripes, which they have. Just wonder if the one they actually wanted is situated some 150 miles north on the banks of the Tyne in Toonland?
Whilst we're on the subject of money the Lescott saga reached it's inevitable conclusion when Mr Weird Head finally pulled on a sky blue shirt this week but not before he faced the press and tried to explain that he'd had to leave Everton because he wanted to play for a club that wins trophies! Think he should have checked the facts because the last time the blue Mancs won anything was back in 1976 when they won the League Cup. I don't suppose the fact that he'd just doubled his £40k per week wages had anything to do with his move had it?
But in a week when football's tarnished image took another battering with the nobheads at West Ham and Millwall living up to their macho hooligan notoriety, it was an Arsenal player and his manager who had me shaking my head the most. "so Mr Wenger how would you describe the diving incident that led to the penalty" the reporter enquired? "he clearly touched him before he went down..................yes a clear penalty" Mr One Eyed Whinger observed..........should have gone to Specsavers Arsene me thinks!
A nice 2:0 victory for the mighty whites in the offing at Colchester. Can't wait. Look out for the tweets from Colchester.
MOT
Posted by Andrew Butterwick at 22:06