One of the benefits of travelling to away games by train is that alcoholic refreshment can be taken at a leisurely pace during the journey. So as the Happy Chocker and I cracked the first can as we approached Doncaster we had a slight tinge of sympathy, only a tiny tinge, for Turkey Twizzler and Denby who were on the booze free club travel bus somewhere on the M1. As it turns out it was probably a wise move for Turkey to be on the Temperence bus as he was suffering from a robust hangover from the previous nights activities. Pity he then chose the exact moment the bus was negotiating a large roundabout to relieve himself of the contents of his stomach in the bus toilet, or to be exact the toilet floor, wall and most of his clothing. Denby dutifully kept us informed by text and photos of these momentous events..............that's what friends are for! Meanwhile our train was populated by excited Codhead fans on their way to Stamford Bridge none of whom seemed to want to engage in any pre match banter. Maybe they know this season will be a long hard fight in the basement of the Money grabbing league for them. Adding to the fun though were a number of Chelski fans who boarded at Grantham and Retford (well known districts of West London). Funniest thing was when we got to Kings X and one of the plastic Chelski fans was studiously asking directions to the game looking completely lost on the tube. Glory hunting bastard!
Once in High Wycombe we had the usual refreshment and then collared a taxi to transport us the 3 mile to the ground. This was our first visit to Adams Park and it was somewhat of a surreal experience. We had to walk the final half mile due to the congestion and mingling with the home fans it soon became apparent that Wycombe was very much a family club as silver haired grandparents were just as evident sporting the replica shirts as were the younger element and not a chav in sight. There were lots of rather polite charity "tin shakers", even the stewards outside the ground were smiling and helpful....................it all added up to a feeling we were attending a church fete in a village straight from Midsommer Murders rather than a football match! Inside the ground we met familiar whites fanatics in the sold out away allocation of 2000+ and discussed the first 2 less than convincing Leeds performances. 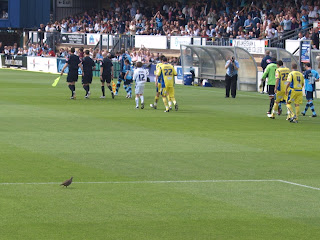 As the teams came out into the afternoon sunshine I noticed a Grouse scampering across the pitch in an attempt to find an escape route. Not sure why he didn't just fly, perhaps he knew there were some guns in the woods behind the ground, whatever the reason he did a couple of circuits of the pitch before scampering towards to the away fans as if he was auditioning for a new Whiskey advert. The first half started and Leeds were soon under the cosh. Ben Parker was still injured so Hughes continued deputising at Left back...........why when we have Sheehan and White? Krisnorbo returned from international duty with more stitches in his head and his head was swathed with a Taliban like head dress. Beckford returned from his midweek injury with a token bandage on the "injured" knee. 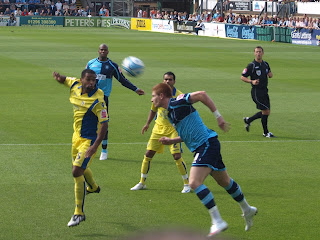 Leeds were troubled by the pace of the Wycombe winger on the left and didn't seem to have any idea of how to counter him. Certainly leaving Jason Crowe one on one with him didn't work. It was from one of the many raids down the left flank that Wycombe should have taken the lead when an inviting cross was spurned my Mousinho when it was easier to score. Wycombe had a centre forward call Harrold who had more than a passing resemblance to Prince Harry........"Are you Harry in disguise" Beckford got free a couple of times and went near but all in all the first half could be summed up in one word......Dreadful. We no more looked like a promotion team than Dale Winton looks like a Cage Fighter! There were even boos from the whites fans as the players left the pitch!
Things weren't looking good and my mind drifted to future midweek treks to Walsall, Yeovil etc to watch such inept play. Suddenly a great depression descended on me only to be lifted as Denby came across to give me all the gory details of "vomitgate" on the Temperance bus. Things were looking up.
The 2nd half started and soon Leeds were a different team. The tempo was lifted, the passing was crisper and we started to create good chances. Wycombe's supply wide was stifled and Leeds had the upper hand. The sun was even beaming down on burning my forehead. Leeds were attacking the away end and their improved showing rallied the troops and soon MOT and Glory Glory Leeds United was booming out around the church fete. 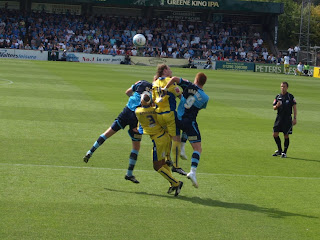 The inevitable goal came from after Snoddy shovelled the ball onto the advancing Becchio who planted an unstoppable shot from 20 yards into the bottom corner. Now the Leeds fans were celebrating with a good section of the main stand singing along withe next "We are Leeds" chant. Funny old game football but Wycombe were visibly wilting from the Leeds onslaught and another goal was on the cards. Beckford brought a brilliant save from the Wycombe goalie with an audacious overhead kick and Johnson rifled in a number 100mph shots that peppered the home goal........someone needs to tell Brad that hitting the target is better than trying to burst the ball.
Michael Duberry was getting the predicted dogs abuse for his part in the Bowyer/Woodgate trial but he seemed to laugh all the taunts off...................I thought "1:0 its Duberry's fault" was a bit harsh though?
So with Leeds well on top and the home side seemingly out for the count we entered the last 5 minutes. What could possibly go wrong? Well the Chairboys could launch a final assault, which they did, and Leeds could start giving the ball away again which they did. I could hear my fingernails saying here we go again as we endured an excruciating end to the game culminating in Shane Higgs pulling off a superb save to secure the 3 points. 1:0 results should carry a givt health warning. 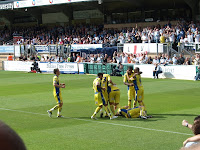 Krisnorbo was MOM by a country mile with an outstanding performance at the heart of the defence and Doyle had another workmanlike stint in midfield. Howson was better than of late but the 2 fullbacks both looked vulnerable today. Snoddy's still not firing on all cylinders but Becchio had a better afternoon. Brad Johnson is an enigma, one minute looking a dangerous attacking option and working his socks off the next he looks like a lost schoolboy at a grown ups party. Beckford looked sharp again and really does look like he will score each time he loses his man, which he does regularly, just wish he would control his petulance which gained him another yellow today.
So we kept our 100% record for the season but improvements are needed all round if we are going to storm the League. We took the after match chaos outside the ground in our stride and finally found a taxi to whisk us back to the station and homeward bound. The return Hull train had some inebriated Codheads trying to convince HC that they had been unlucky to lose to Chelski and Mr Plastic Chelski looked at lot more at home as he alighted in the Chelsea superb of Retford. The long day came to end just in time to watch BBC's Football League programme as the present Mrs MOT was fast asleep. Not a bad day in the end and we'll do it all again on Tuesday at Walsall. Can't wait.
MOT

Posted by Andrew Butterwick at 09:05