Another Saturday and another game and once again the Selby faithful were gathered on the station waiting for the train into God's city. A lone Codhead fan scowled at us from the other platform. Mmmm.....me thinks we'll be playing them next year, maybe that's the reason for the scowl? Or maybe it's just he's a miserable codhead?
Last year's nervous anticipation before games has been replaced by assured confidence in our circle of fans so there was little debate amongst the throng other than how many goals Leeds would win by. That is until Welly challenged my assumption that the Gills wouldn't bring many fans with them! Soon he was wanting to wager his hard earned money that they would fill more than half the cheese wedge. Calm down Welly!
In the members bar Nayls was on interview duty with Tresor thus answering the query over whether he was playing. Pie & Peas were demolished with an accompanying pint and we were good to go. Crowe was fit to resume at right back leaving Bromby and Kissy in the centre of defence. 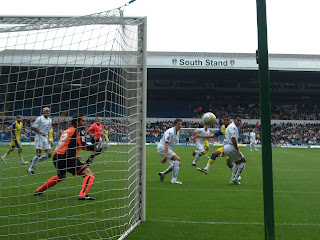 Leeds, seeking a 15th straight win at ER, were soon into their stride and were stroking the ball around with ease creating good chances for Becchio amongst others but it was ex Leeds man Weston who nearly opened the scoring with a firm shot that flew over my left shoulder on 10 minutes. With most of the action at the other end of the pitch most of the kop needed binoculars to make out what was happening but what was clear was both Snoddy and the big Argentinian were causing the Gills all sorts of problem. Good job for them that Lucciano didn't have his shooting boots on.
We didn't have to wait long for the first goal though as on 15 minutes Bradley Johnson sailed through the air like a laser guided missile to meet a corner from Snoddy and put Leeds in front. Definitely no more than they deserved. All the confidence and encouragement of their unbeaten start to the season began to show as the Leeds team, and particularly the midfield, started to systematically dismantle the Kent side with some sublime football. Hope the Scallywags scouts were watching! Doyle and Howson were bossing the middle of the park and both Becchio and Beckford were causing Gillingham problems up front. The away side had a Bentley playing at centre back but it was the Leeds machine that was purring like a Rolls Royce.
The Gills briefly threatened with some neat football releasing their winger but when he performed a belated dive in the box that would have had Eduardo drooling the move came to nothing. The kop was baying for blood and chants of "cheat cheat" rained down.
We were 2 up and cruising when Bradders added his second after a battling run and firm shot that the goalie will be disappointed he didn't stop. Leeds fans settled down to watch a virtuoso performance from the men in white and they didn't disappoint as the ball was knocked from player to player with consummate ease and in doing so running the Kent team ragged. The Gills manager, Paul Stimpson, was glad the HT whistle blew with his team only 2 behind.
Even though Leeds were cruising the atmosphere was relatively subdued in the first half, probably due to the ease with which the whites were notching another impressive win. Strangely part of me was wishing for a return to some of the games last year when you just didn't know what was going to happen next, especially when we were defending! I suppose we've forgotten what it's like to watch a team in full control of the match. 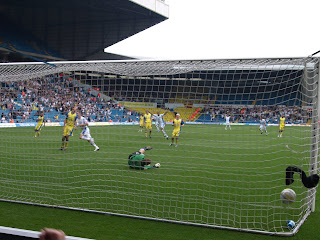 Lucas Kop Cat had his usual jesting with the away goalie and we were under way again. Lucas's antics must have flustered the goalie because no sooner had the half started than he was picking the ball out of the net after a superbly crafted Jonny Howson goal. Hold the front page of the Selby Times!
3:0 and it was quite frankly embarrassingly easy so when Beckford crashed a super shot against the bar within 60 seconds of the restart I thought we were in for an avalanche of goals. It's perhaps aswell that Gillingham struck back with a goal of their own to give them a glimmer of hope. This rattled Leeds and for the next ten minutes Gillingham pushed on in the forlorn hope that they could rescue the game but Leeds soon regained the ascendancy and once they did the result was never in doubt.
The referee was having a strange game seemingly reluctant to use his whistle even when the most obvious foul had been committed. So various elbows and kicks on players, including one by Becks, went unpunished as the ref tried to let the game flow. Snoddy was on the end of one particular well aimed elbow and his quick fire temper came into play as he advised the offending Gillingham player of his wrongs with a gentle squeeze of his throat! he was subbed soon after that as he seemed to have slowed down, either run out of steam or picked up a knock. Crowe departed with him to allow Kilkenny and Lubo a good 20 minutes run. 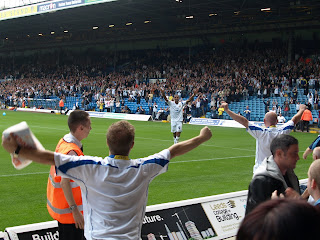 There was an air of inevitability about the remaining proceedings as Leeds played with a swagger befitting a team at their peak. So it was no surprise when Jermaine finally added the 4th with 10 minutes remaining after a looping deflected shot from the hard working Doyle came back off the bar for him to nonchalantly nod home. Simples!
Grella came off the bench for another impressive spell, including getting a beauty of an elbow from Mr Bentley. If he keeps improving as he is he could displace Lucciano from the starting XI before Xmas. Lubo nearly made it 5 with a looping header near the end as Leeds ended the game very much on top. The ref blew the final whistle to signal a 15th straight win the mighty whites. A ripple of excitement spread among the bus queues as news of a late goal at Norwich meant we were top of the League. Perfect. 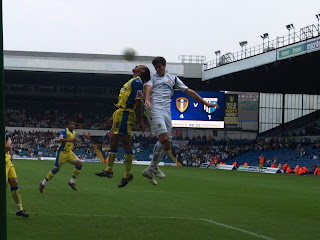 This was another impressive performance built on a strong defence, a tigerish midfield ably led by Mr Howson and the predatory front two of double Becks. It's hard to see Leeds losing any game on this form including the forthcoming clash with the "Alloy wheel stealers" Mr Grayson is slowly building the foundations for another Leeds Footballing dynasty that could match any that Wilko, O Leary or possibly even Sir Don built. Suddenly it's a very good time to be a Leeds fan.
We all know who's up next and regardless of what team Mr Benitez sends out on Tuesday night they will know they've been in a match by the time News at Ten has finished.................and I've a sneaking feeling that they will return to Scouse land with their tales between their legs after a famous Leeds victory. It therefore seems only fair that today's match track is from the Beatles.
Can't wait.
MOT
Posted by Andrew Butterwick at 18:15

Now I definitely did not expect such a facile win so I am delighted with the performance as much as the result. Things sure are looking up, MOT. Grayson sure is THE MAN!!

Just hope we can keep it going, its a long hard road in this league.

Who has impressed you most of all this season, MOT? And what of the new guys, looks like we now have 4 good centre halves, phew.

Another great report, thanks a mil.

Oh and finally, Brad Johnson really seems to have flourished this season.

Peter,
Shane Higgs and Kissy have made a massive impact in defence, especially with Naylor's absent but Johnson & Howson have also come on leaps and bounds this season. The common denomentor is Simon Grayson though. He's moulded the players into a really solid unit that are going to take some shifting from the top of the league. good days are slowly returning to LS11.
MOT