York station was the starting point for today's journey. The Happy Chocker, the Quiet One, Beefy and yours truly were there in good time as usual and had time to muse on the tricky game ahead with the Franchise Dons. Would Leeds suffer from a hangover from Tuesday's heroic exploits against the reds? Would Bam Bam get a starting place? 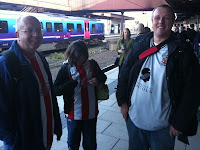 All the serious debate was put to one side as we chatted to some Lincoln fans on their way to Bury. It's always good to meet some proper fans who fanatically follow their favourites to all ends of the country and this was no exception. The leader of their little gang was sporting one of the worst examples of an away strip I had seen in a while though...............either that or he'd washed a white shirt with his coloureds?Once on the train quizzes, sausage rolls and sandwiches kept us occupied as we travelled south with Twizzler joining us at Sheffield after he'd had an early morning heated debate with some Codheads from his fair city. It was just another typical away day with our motley crew.
Eventually the soul destroying anonymous pile of concrete that is Milton Keynes came into view and we were deposited onto the platform. The ticket inspector kindly told us that there was a mini bus laid on to take the Leeds fans to the stadium? What all 4000 of them I politely enquired? We were heading for Wetherspoons first though past the tasteless cloned buildings that somehow resembled a 1960's cityscape of Leningrad without the hammer and sickle. That is to everyone except Twizzler who compared it to "The Last of the Summer Wine"?????????? 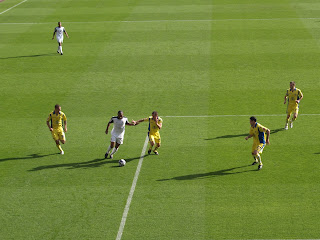 Now I know he'd had a drink but even accounting for the not inconsiderable quantity of lager he'd already consumed that was the daftest comparison I've ever heard.
From Wetherspoons we hitched a ride on the South Kirby bus to the marvellously named "Moo Camp" stadium (concrete cows and all that) just in time for kick off. Now Beefy had received inside info that Becchio hadn't travelled, we assumed that his heavily pregnant wife was the reason, and so Grella was to start with Bromby returning at the back the only changes from Tuesday. The fantastic Leeds away support had filled the part of the concrete dome allocated for visiting supporters supplemented by a good number of whites fans in the home end.
The game started in bright sunshine and soon became a disjointed battle of two well disciplined formations that in effect cancelled each other out. The Premiership ref didn't help matters by insisting on using his whistle at every possible opportunity. The first twenty minutes were instantly forgettable and even the Leeds fans' vocal support was dampened by the poor fare on offer. I think the MK Dons fans were asleep. The game burst into life when Jason Puncheon launched a two footed tackle onto Doyle's shins and got a red card for his trouble. Oh no the 10 man curse could strike again. MK re-organised and set their stall to defend and leave one man up front. This didn't improve the entertainment so I think everybody was glad when the half time whistle went. Definitely a hangover from the Liverpool game and definitely the worst Leeds have played this season. Never mind Larry will sort them out and the 2nd half will be better. Mmmm no it wasn't. Robbo soon came on as Hughes was sacrificed for the extra attacking threat from the twinkle toed scouser. Lubo, who had replaced Jason Crowe, was having another productive afternoon alongside Kissy. 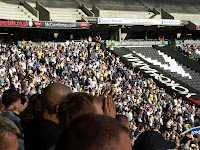 As the half progressed the Leeds fans became more and more tense as MK battled to salvage a point or even an unlikely win. When Higgs went off injured to be replaced by Casper I could feel a sense of deja vu as we yet again struggled to dispatch a team with one of their number having an early bath. Up front we weren't threatening the MK goal as Beckford looked out of sorts without Lucciano at his side and Grella was trying his hardest to show me why I don't think he is a striker. Beckford did get the ball in the net but he was way offside. By now the referee was an absolute pain in the bum to both sides as he tried to wear out his whistle in one game. 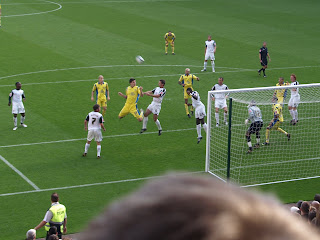 The very polite MK fans found their voice as the game entered the closing stages with their team still level. That well loved ex Manure manager of MK incurred the wrath of Larry and 4000 whites fans by keeping the ball at a throw in an attempt to waste more time. I had that sinking feeling in my stomach as Leeds huffed and puffed without testing the big MK goalie. All this way just for a point? Charlton were in control against Exeter so we were on the brink of losing top spot. Then the match entered the 4 minutes of added time. One last push by Leeds and the ball found it's way to Robbo on the left. After a jinking run he was bundled to the ground just outside the box on the left wing. Free kick! Everybody went up and Bradders floated the most inviting cross into the box for Snoddy of all people to meet it and direct the ball into the net. Goooooooooooal and how the Leeds fans rejoiced in delirious fashion knowing full well that was just enough to keep us on top of the pile. What a finish to a poor Leeds performance. They kept battling to the end which is to their credit but Larry won't be pleased with the majority of the game. Beckford doesn't have the ability to hold the ball up and time and again lost possession. Grella looking very much lightweight today. At least we notched another clean sheet and the away fans streamed from the Moo Camp in boisterous mood singing lustily "We're gonna win the League".
The train ride home was a good one especially when we heard that Hull had lost 6.1 to Liverpool.......................taxi for Phil Brown! Our debate over the best chocolate bar, packet of crisps and chocolate biscuit kept the whole carriage amused for an hour together with fond memories of Twizzlers comparison of MK to Last of the Summer Wine. The Lincoln fans were at Donny station as we made our last change and it was a tired and bedraggled foursome that stumbled onto the platform at Selby at the end of another long away day. The match will not live long in the memory but Snoddy's header will. Hopefully the team can re-charge their batteries ready for Tuesday's visit of Carlisle and the injuries to Higgs and Crowe are not too serious.
MOT
Posted by Andrew Butterwick at 22:26