Dark and rain laden skies were overhead as we left Selby. Beefy, the Happy Chocker and the Quiet One were all in positive mood as we headed down the A1 towards Kettering. HC had to mention Groundhog Day though in reference to the spookily similar weather, trip and round of the Cup when we fell to the mighty Histon last year. We forgave him though and flirted with an odd quiz question or two and before long we were on the outskirts of Corby. 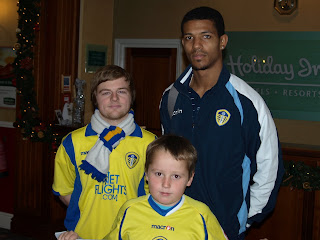 The ultra observant driver, me, spotted the Leeds team coach holed up in the Corby Holiday Inn and in the time it takes to cross three lanes of queuing traffic we were in the Hotel car park. As ever the team were more than happy to pose for pics and sign Beefy's autograph sheet after their final team talk in Hotel.
If I was superstitious I would have been worried because the last time we bumped into the team was at a certain game in Hereford last year...................Mmmmm.
After the excitement of meeting the team we deposited the car in the Beeswing pub car park and refreshed ourselves after the long journey. Examples of traditional FA Cup profiteering were everywhere. After paying £21.50 for the pleasure of standing on a concrete slope behind the goals in the pouring rain we were then asked to stump up £4 for a programme! Ahhhhh the magic of the Cup. 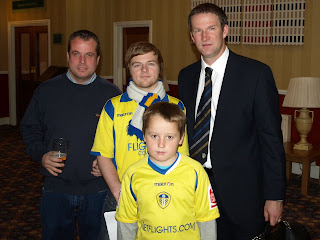 Grella partnered Becks up front, Jason Crowe started at right back as Bromby had moved into the middle to replace the injured Kisnorbo. New boy Capaldi was straight in at left back. The pitch looked in reasonable nick but the ground was "compact" to say the least. Leeds were attacking the far end in the first half as the game got under way with the majority of the fans watching on ITV hoping for an upset. The producers at ITV must have remembered last year's escapades with the sound mike as there wasn't one to be seen anywhere near the Leeds fans. Didn't stop the whites fans serenading the TV hierarchy with their thoughts on the ITV coverage as they reprised last years ditty "ITV is f****** S***" followed by a couple of lusty choruses of the MOTD theme.
Leeds bossed most of a very wet first half with Kilkenny getting an early grip in midfield as the League 1 leaders showed their extra class. Early shots on goal by Snoddy and Killa didn't trouble the Kettering Goalie and capt though but when Becks skipped past the rotund keeper and crossed for Bromby at the far post it needed a desperate clearance off the line by a Poppies defender to prevent the opening goal. Things were looking at lot more comfortable than that day at Histon and soon Becks and Snoddy hit the woodwork in quick succession. Beckford's speed was troubling the home defence and twice they resorted to less than subtle methods to pull him down.
Behind the goal a passionate alcohol fueled argument raged amongst a group of Leeds fans over Beckford's qualities or lack of them. I know we all pay our money and have an opinion but slagging off our top scorer before he's broke sweat is out of order in my book. Kettering were battling away and when they did break looked lively attacking Crowe's flank. Danger signs were flashing for the naturally nervous Leeds fans. Their best chance fell to the ex Leeds man Gypsy lookalike Elding but he predictably fired high wide and handsome. By the time the half time whistle blew the rain had soaked through my coat, jumper and shirt. Sometimes it's hard being a Leeds fan...............No on second thoughts it's hard being a Leeds fan all the time . 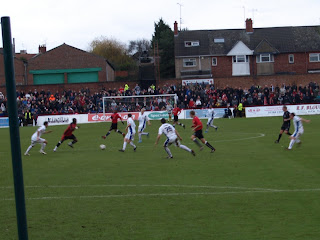 The weather worsened and the slate grey skies darkened as the second half got under way. Leeds were having by far the greater share of possession but still seemed to be in 3rd gear. Kettering were quite happy to sit back and battle on the tight pitch allowing little space for Leeds to exploit. Then as the away fans were getting more and more restless the home side pinched the lead as Casper appeared to punch a cross onto the head of their centre half and watched it rebound into the net. Half of the ground erupted in delight whilst the travelling Leeds fans started to think maybe the Happy Chocker's Groundhog day prediction was about to come true?
Leeds are definitely made of sterner stuff than last year and the goal spurred them on as they lay siege to the home goal. The fat goalkeeping Kettering manager was having an inspired game as he saved headers first from Doyle and then from Crowe as the nerves were stretched to breaking point around me. Grella had a couple of chances and what seemed like a good penalty shout turned down before he was replaced by Becchio.
A goal was on the cards though and eventually we snatched an equaliser with 10 minutes to go as Beckford turned in Snoddy's fierce cross. Jubilation behind the goals. There was still time to get the winner aswell!
If anything we seemed to relax rather than go for the jugular though. Leeds finished on top without being able to pinch a valuable winner. By now I, along with the rest of the hardy fans were soaked to the skin. The high Police presence for our exit from the ground was slightly puzzling but I was one happy chappy when I got to the sanctuary of the car and more to the point the heater. Not the best performance by a long chalk but at least we were still in the 3rd round draw. Kisnorbo was badly missed in defence and up front Grella didn't do anything to sway me from the view that he's not a natural striker. The resolve and battling qualities of the team did shine through again though.
Once all of our rabble were on board we headed northwards listening to the draw and when we got to the last two balls knowing that they were Leeds or Kettering and Salford Yanks an electric charge filled the air. A chance to got back to the Theatre of Delusion to play the Salford Yanks IF we beat the mighty Kettering............................not a bad incentive. Definitely another TV game me thinks. The journey home was helped by images of 10,000 Leeds fans belting out MOT at the home of our hated rivals.....................bliss.
Roll on Tuesday and another visit to the coldest ground in the world Oldham. Should have dried out by then!
Can't wait.
MOT

Posted by Andrew Butterwick at 19:22

Hi MOT, agree that this following Leeds United through every rain-soaked stadium in England is a bit of a mare at times, but wouldn't give it up for the world. Think Kettering ranks amongst the poorest examples of stadiums I've seen, but then, I expected nothing less and we'll be at another one that makes the list tonight.

I'm actually shivering thinking about Oldham. Hope it's our last ever visit!

So Old Trafford awaits assuming we can put Kettering in their place at Elland Road. Makes your mouth water, doesn't it? 13,000 should be the allocation (15% as per FA rules) so should be a good one. Bring it on.

PS, nice one on meeting the team again by the way. On and on.

Hmm good idea!! I am happy to check this site and have added this in my bookmark list. http://ketteringhotelsi.co.uk/