Not surprisingly the weather turned grey as we motored out of the white rose county and into Lancashire.............it always does. Beefy was beefing in the back of the car about the fact that whenever we play Oldham the temperature is always hovering around Zero. As we parked the car and picked our way through the potholes and the puddles in the car park even I started to question my sanity in swapping a warm study huddled in front of the laptop for Boundary Park on a wet Saturday night. Soon we were in the warmth of the Clayton Green pub though and the pre match chatter warmed the cockles. Big Steve was sulking because I'd missed his birthday off the mentions in the preview. So happy 52nd birthday Steve.........you don't mind me mentioning your age do you? 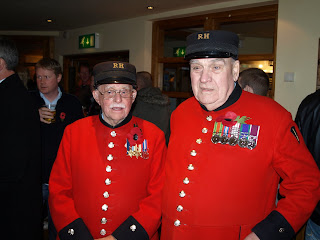 You don't see many Chelsea pensioners at Leeds games but tonight was an exception as two old timers joined us in the pub for a pre match drink. They were guests of the club as part of their Remembrance day celebrations. "I'm only here for the beer" one confided in me!
Once in the ground I'd like to say that the minutes silence was impeccably observed but it wasn't. Sad to say late coming Leeds fans chanting drifted across the Lancashire night air as the Last Post was sounded.
Larry had surprised a few with his line up. Snoddy and Bradders supporting Beckford up front in a 4.3.3 formation with Doyle, Killa and Howson in midfield.
Leeds fans were in fine voice as the first ever FA Cup match to be streamed live got underway. The weather was cold and wet and was not conducive to pretty football never the less Leeds started as they meant to go by zipping the ball about on the greasy surface. Daryl Flahavan in the home goal was called into action early on as he sprinted out to deny Snoddy. I had the pleasure of standing next to one of the most active and vocal members of the "Beckford's a lazy no good bastard" club and it wasn't long before he declared our star striker to be a useless c***. With fans like that who needs enemies? Then another heated debate erupted over the singing of the Munich song as an old Leeds fan tried to shout the singers down. For me singing a song that celebrates the deaths of innocent players and staff of our bitterest rivals is disgusting, especially when we quite rightly berate the Millwall fans who sing the Istanbul songs.
Back to the match and Leeds were dominating the first half playing the better football but Casper had to be on his toes to deny Colbeck when he took one too many touches on the half hour. At the other end Snoddy appeared to be wrestled to the ground inside the box with the ref and linesman watching on but no whistle was blown. A goal was on the cards and sure enough it came when Jonny Howson cracked an unstoppable shot from 25 yards to put Leeds in front. Cue noisy celebrations in the away end packed with 50% of the games crowd. 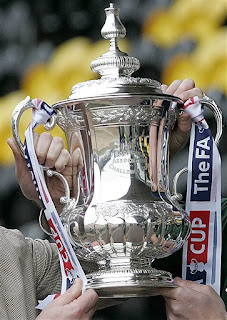 Beckford had been quiet, clearly not liking the lone striker role and liking even less the clattering he was getting from the ex Leeds fatman Gregan. He is his own worst enemy in games like this though. Instead of making runs looking for the ball and chasing down defenders he disappears from the game in a glorified sulk. Very frustrating for the fans.
The half finished with Leeds on top and the fans singing a lusty chorus of WACCOE which lasted the whole of HT accompanied by the shirt waving and dancing.
I thought that we would push on and make the game safe against a distinctly average Oldham side in the 2nd half but it didn't quite happen. The game got scrappier the more the game went on and Oldham began to sniff the possibility of snatching an equaliser. Their "crowd" even burst into song at long last. Taylor tested Casper with a shot drawing an excellent save from the great Dane whilst at the other end Jermaine finally got free only to blast the ball into the Leeds hordes behind the goal. Fireworks were lighting up the East Lancs sky but sadly on the pitch the fizz had gone out of the game. 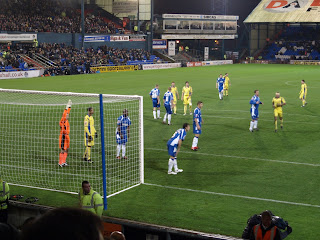 Doyle finally got the booking he wanted (so he wipes out his bookings with a one match ban against Grimsby) and was immediately replaced by Aidy White and Grella replaced Beckford whose slow walk off even infuriated the Leeds fans. There were times in the 2nd half when I thought the picture I was watching had frozen just like the live stream on the T'internet but the two subs livenened up the last throes of the match.
As the game stuttered into added time Snoddy broke in mid field and released the eager White who surged through the tiring defence to pick out Grella at the back post who finished well to secure our passage into round 2. Magic!
All's well that ends well but not the most aesthetic match I've ever seen. There were glimpses of the supreme confidence that Leeds are playing with of late but I think at times it all got a bit too easy and the foot came off the gas. Hoepfully when we return in a few weeks for the League game we are a bit more ruthless against a poor Oldham side.
On the ride home down the M62 the main topic of conversation was who we wanted in the next round and hopefully round 3..........Round 2 anyone at home and definitely not Torquay away! Round 3 Quiet One has had a dream that we play Coventry? Newcastle, Tottenham or even Ipswich (blame Beefy) away were all suggested. That's the magic of the cup though. We can all dream about progressing in this famous old competition and even harbour ridiculous thoughts of getting to Wembley.......................and while ever our ball is still in the velvet bag there's a chance. Roll on 3.35pm on Sunday and the draw.
Grimsby in the "Watching Paint dry" Cup on Tuesday. Can't wait.
MOT

Posted by Andrew Butterwick at 21:15

Hi MOT,
Watched the match last night and i took on board about fans who get on players backs, especially the one you were unfortunate to be next to, they have proberbly never played football and if they did it was of a poor standard, BUT Beckford does not do himself any favours, ok he had poor supply but sometimes you have to go hunting or patrol across the back line, when he did depart and reached the dug out he did not acknowledge any of his fellow players, and the cameras stayed on him, he reminded of that portugese prat that has just gone to Madrid, one question.. would you be afraid of him against us with Bam Bam or bandage head marking him, i dont think so.
All in all, we went, we did a job, in next round, end of story.
One bright note, got tickets for England v Brazil, LOOK out for LUFC on England flag.
Qatar White

Thanks for the comment. I Like your comparison with the winking, diving one, lol. LUFC flag at the England match will be good. will keep an eye out for it.
Cheers
MOT