You could tell by the large number of Leeds fans milling around on Selby station that once again a massive crowd was heading for Elland Road in anticipation of a Leeds triumph. The members bar was packed and thankfully Bacon Butties were on offer to accompany the pre match pint. I for one don't like lunchtime kick offs...............it's not natural. The atmosphere is never the same as it is when the game is kicking off at 3pm but despite that there was a tingle of excitement in the air as we looked forward to some revenge on our nearest rivals from down the M62. All we need is an early goal and we can slaughter them I rather rashly advised the Happy Chocker as we took our seats. Kissy was still injured and Beckford predictably returned up front partnered surprisingly by Vokes. 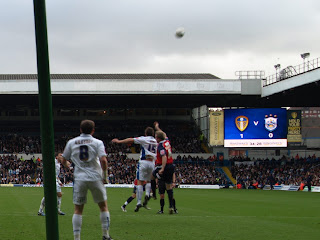 The match kicked off in dazzling sunshine, which was a welcome change to the recent monsoon conditions we've endured, the large away following cranked up the noise but were soon stunned into silence as Snoddy turned in a Vokes shot that was spilled by Smithies in the Huddersfield goal with just a minute on the clock. Just the early goal I'd ordered. Beckford was looking sharp up front and it was easy to see why Huddersfield had conceded lots of goals this season. But at the other end it was also crystal clear why they have scored so many as they knocked the ball about with speed and confidence. It wasn't long before they rattled Casper's post and gave notice to the home defence that they were in for a torrid afternoon. Most of the away attacks started out wide and both Crowe and Capaldi were looking vulnerable.When Leeds had the ball they were testing the Puppy Dog's defence as first Lubo steered a header just wide and then Snoddy looped a lob agonisingly close to the Huddersfield goal. As the game moved towards half time it was the away team in the ascendancy but Leeds still held the 1 goal lead. 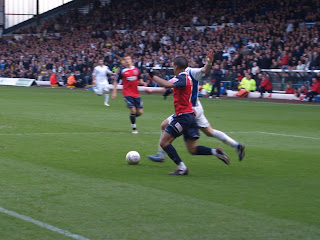 One thing for sure when Elland Road is full is that different faces occupy the seats around our normal position. Today we had the pleasure of a guy with a particularly annoying voice and even worse opinions behind us. His effing, blinding and cursing of the whole team was a masterclass in talking bollocks..................nearly as distracting as the stewards screeching at the crowd to sit down every two minutes.
Huddersfield had definitely shaded the first half but as the clouds darkened above hope sprung eternal from this Leeds fan that Lord Grayson's HT talk would fire up the whites and they would wrest control from our talented neighbours. Mmmmmmm well let's say there was an element of dej vu as Huddersfield scored almost immediately after the restart with a header from Novak.
Huddersfield continued to dominate and Leeds seemed to defend corner after corner without ever picking up the short corner routine that served Huddersfield so well.
Leeds are a dogged team though and with Huddersfield keen to flood forward at every opportunity they were always going to be suspect at the back. Beckford twice escaped the high defence line but was thwarted each time by Smithies. The inpatient whites fans amongst the 37,000 crowd were getting restless as eventually Gradel and Bechhio were introduced with half an hour to go at the expense of Vokes and Kilkenny.
As if on cue Gradel made an immediate impact when he got on the end of a ball bravely headed on by Becks and rifled home a shot that sent the Leeds fans wild with joy. Gradel is certainly one of the best loan signings ever!
Huddersfield refused to lie down though and if anything the goal spurred them on more than Leeds. Desperate defending was needed to keep the slender lead as the Puppy Dogs poured forward. Huddersfield finally got their reward when once again the Leeds back line were undone by a simple ball into the box as Rhodes headed home the equaliser. Things could have been worse as the away team hammered the crossbar with less than a minute remaining. For the first time this season we were hanging on like a tired and battered boxer as the game went into added time and it was the home fans who were glad to hear the final whistle as an exciting game finished all square. 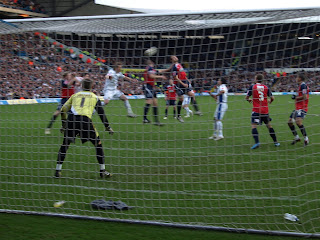 The Leeds fans were mainly subdued as they filed away from the ground knowing that we'd got away with a draw when we could easily have lost this game. We're still 14 points in front of the away team though and although the draw felt like a defeat I'm not too despondent. We can't win every game and against such a talented attacking force as our neighbours a 2:2 draw isn't such a bad result.
Not much chat on the way home though.................it's a long time since we've been under the cosh as we were today. Let's hope it's a long time before it happens again.
Kettering on Tuesday with the prize of a visit to the Salford Yanks for the winners. Guess what?
Can't wait.
MOT

Posted by Andrew Butterwick at 15:56