So finally Jermaine Beckford will fulfill his "dream" to play at St James Park when he pulls on the Yellow away shirt of Leeds at Exeter City tomorrow. Now you wouldn't have thought that two weeks ago would you? To be fair there is still time for him and his agent to follow the golden lure and depart ER before we take on the Grecians. Other clubs, including Wolves, Burnley & Sunderland, are rumoured to be wanting Beckford as the Toon appear not to have enough money in their Piggy bank. I'm sure their will be more twists on this one before the window closes on Feb 1st...................you never know he might still be a Leeds player.............now that would be a shock!
More positive news from the transfer market is that Leicester appear to have done a U turn on the future of Mad Max and are prepared to let Leeds take him on a permanent deal after his loan spell ends tomorrow. At a reported £200k that looks like a good deal to me even for someone who is used almost exclusively as an impact player from the bench................but what an impact player! 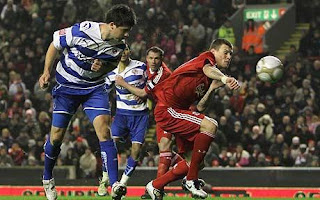 Finally on transfers good luck to big Enoch in his latest move to Falkirk. Always tried with little natural skill but was always good for a chuckle as he ran about the pitch apparently not knowing where his feet were in relation to the ball at any given time!
Another of the "big 4" teams from the money grabbing league tumbled out of the FA Cup as the Scallywags led by the fat Spanish waiter succumbed to a smash and grab raid by Reading at Anfield. Inevitably hope and expectation went up a few notches amongst the legions of mighty whites fans..................If we beat Spurs then it's game on, I mean who's left in? Chelski? Pah
Back to reality and next up Exeter stand in our way of depositing another 3 points in the promotion bank.Thankfully I managed to scramble a ticket for the game and will join the other 1100 away fans in roaring Simon the Messiah's charges onto victory. No thanks though to LUFC ticket services who continue to mystify most fans with their allocation of tickets. I mean if you are going to use online applications why not wait until after normal working hours so the majority of fans can get access without blagging time off work? And if the chosen method is "first come first served" (debatable in my eyes) then at least make sure that the online system can cope and doesn't freeze when 8000 fans all log on at the starting time of 10am. rant over.
Exeter won't be an easy match and as Norwich continue their impressive run we don't want to give them a sniff of a chance of reeling us in at the top of the league. So tomorrow as most of the games from here on in is a big one. All I can say is " In Grayson we Trust".........nuff said.
MOT
Posted by Andrew Butterwick at 07:57