Harold Wilson once famously said that a week is a long time in politics. Well the same could be said for a week in the life of Leeds United. No sooner had we beaten the Salford Yanks in an historic FA Cup tie and the whole world and his dog were showering plaudits on the mighty whites after their stunning performance. Even Sir Alex Rednose voted for Leeds' as performance of the week. But Leeds being Leeds we couldn't bask in the limelight too long as Mr Beckford's agent decided the time was right to drop the bombshell that Sunday's hero was wanting away and had handed in a transfer request. 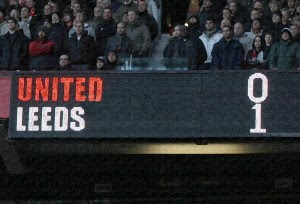 I suppose this shouldn't come as a shock as with the transfer window open and blowing an Arctic blast of reality through the corridors of our money driven national game and Beckford's contract up at the end of the season I suspect his agent didn't even finish his chorus of Auld Lang Syne before he was working on earning his grubby sell on fee. The shame is that from a football perspective he's not going to gain much. Yes he will play half a season in the championship........but he could have had a full season with Leeds next year.....................and will he be the Toon's No 1 striker in the Prem? Not so sure. None of those points will have got in the way of the main reason for the move, his need to at least double his salary...........I mean how can anyone possibly survive on a mere £6k per week?
There is no question that we will miss him, 75 goals in 112 starts says it all. I know he's not the finished article and his all round game leaves a lot to be desired but he has that precious commodity of lightening pace together with the knack of being able to score goals and lot's of them. Ask England international Wes Brown if he thinks he is a good player. He is a massive loss to Leeds and we will struggle to replace him big time. The one redeeming factor in all of this is Simon Grayson. Arguably Beckford had his best game of the season against Manure and this after all the disruption of the transfer request. Lord Grayson steered the team and the player through those rocky waters and the rest is history, literally. In Grayson we Trust!
At the time of going to press our game is still on against Wycombe. Given that the majority of other games have already been cancelled it does give us the opportunity to further cement our stranglehold at the top of the league and welcome back the returning heroes to fortress ER. Beckford could still play against Wycombe but somehow I think he's played his last game in a Leeds shirt.
Finally if anyone has a spare Exeter ticket I'm desperate for one. Our application was unsuccessful. Unbelievable.
So with snow covering the whole of Britain in a white blanket people are talking about climate change and strange weather patterns as the reason...................rubbish is just god's tribute to Leeds for beating the Salford Yanks!
MOT
In Grayson we Trust.
Posted by Andrew Butterwick at 07:53

Hi MOT,
First of all happy new year to you Mrs. MOT and family glad you had a nice trip to the sun.
As for the Beckford saga it is getting boring, one thing i cannot understand is that the team who are buying him, and it looks like it is Newcastle, that they allowed him to get cup tied....strange. When the team was announced and snoddy was on the bench i thought he had been tapped how wrong can we be, the support in OT was a credit to you all, we watched it in the Ritz Carlton Hotel and they also han the Old Firm match on another screen, when we scored the bar manager was not too happy with the beer shampoo the carpet got and the jocks started watching our game as it was more entertaining and the majority was behind the lads....MAGIC, the head was like a shed the next day. The fan base here has grown now there are seven of us around Doha.
Looking at the fixture list and could be home around March time, you will know as you will see the flag with Qatar Whites on it.
Hope you get a ticket for Exeter, as usual great write up keep em coming.
All the best
Qatar White

Qatar White,
Happy new year to you aswell. if you are back in March I'll buy you a pint at ER. definitely want a pic of the qatar Whites flag for the blog.
Heres to 3 points tomorrow.
Cant do with the weather though.....got used to the Egyptian climate over Xmas.
Regards
MOT