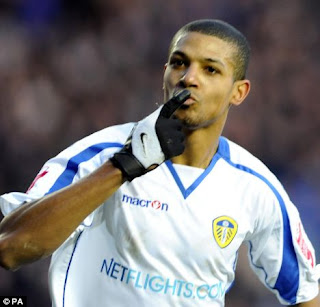 Happy birthday and hopefully next season you will be travelling to grounds in the Championship.

I know this sin't the right place but I couldn't find contact details for you. I came across your site and even though I’m not a Leeds fan I really enjoyed reading it. It’s turning into a real scrap at the top of the table but the win at Tranmere gives you a bit of breathing room. It’s been great having Leeds back in the headlines and I don’t think there was a sensible football fan that didn’t enjoy your win at Old Trafford.

I know you probably get loads of these but the reason I'm emailing is that I work on a new, stats based game called Picklive Football. The basic principal is you choose three players and you score points for completed passes, assists and goals etc. Everything is updated in real time and you play against other users to create that competition element. We play games every Tuesday and Wednesday night at http://football.picklive.com.

Also, as the game relies on live data, we get a lot of match stats that I thought you might be able to use during the summer as we're covering every game at the World Cup. Currently we only do Premier League games but we’re hoping to do Football League games next season and you could use the stats for these as well. During the match every single action is recorded, such as interceptions, failed passes, and tackles and I thought these might help you analyse the game a little deeper and let you write pieces about the World Cup during the summer.

Here is an example of the match stats from Tuesday's Arsenal v Porto game: http://bit.ly/aT3IHr (these show the Picklive points scored by the player but the number of each action can be worked out using the scoring summary: http://bit.ly/9IEgPg).

If the game sounds interesting or you'd like the stats just send me an email and I'll answer any questions you might have and would be more than happy to help.

Thanks for the comments Olly,
You game looks interesting. I might give it a go if I get a minute
MOT