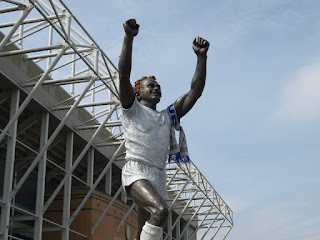 So another week of the pre season races by. As ever with Leeds United it has had it's highs and excruciating lows. For the sake of not spoiling your Sunday read I will gloss over the woeful showing at Gigg Lane where Leeds were buried in monsoon conditions by a League 2 outfit who's main ambition is to survive another year in the Football League's basement division. Their 4.0 victory follows on from their JPT victory at ER in 2007.........................Mmmm bit embarrassing to have probably the 8th best team in Greater Manchester as your bogey team!

Worse was to come as Paul Connelly revealed on Radio Leeds in his broad scouser accent that a certain Mr Paynter was hobbling around Thorp Arch with his leg in a pot and would be absent for at least 6 weeks. Suddenly we were running out of strikers with Mad Max and David Somma both suspended for the start of the season and the activity on the transfer front as frequent as Osama Bin Laden's appearances on Question Time some fans were getting understandably nervous. The numerous message boards were soon singing to the "Bates out" tune again as the bearded one seems hell bent on not investing transfer fees in the attempt to return Leeds to the Premier League.
So with all the problems stacking up Lord Grayson took his troops to Monkey hanging land to take on Hartlepool. Just to confirm what a funny old game football is Leeds turned on the style and triumphed 5.0 against a an admittedly poor Poolie team. Becchio netted 2 and the rest coming from midfield as Larry tried out a midfield 5 with "Our Argie" ploughing his lone furrow up front.
The Leeds faithful who packed into the away end and overspilled into the main stand lapped up the glut of goals and travelled back down the A1 with smiles on their faces.
Nice as it is to see your favourites win a friendly I don't think you can read too much into games that are inevitably pre cursors for the main event. Pre season is littered with eye catching results as yesterday proved............Burton Albion thrashed West Ham 4.2, Stevenage upset Bob Crowe's beloved Millwall 2.1.............What is important is that the momentum of pre season reaches it's climax ready for the first game, in our case Derby County at home a week on Saturday. Before that Leeds travel to Norway to play a team that sounds like a dish of breakfast cereals before returning to Elland Road to take on that eloquent football pundit Mick Macarthy's Wolves. By then Lord Grayson will have all the information he needs to send out a team to beat the Rams. I do like the idea of playing 5 in midfield and attacking down the flanks. You never know it might have a Brazilian blend to it with the Samba youngsters who are currently on trial at Thorp Arch. It's doubtful that it will include a big money signing unless Capt Birdseye suddenly has a change of heart. Time will tell if that will hold back a promotion charge or worse.
Life is never dull on Planet Leeds and as we found out at the back end of last season..........we don't do easy. One thing for sure the season is almost here and guess what?
Can't wait!
MOT
Yours truly will be on a well earned break for the next weeks or so. I will be back for the preview of the Derby game and then we're off. Those of you who have still got their seat belts from last year dig them out..........I've a feeling they might just be useful again this year!
Posted by Andrew Butterwick at 09:16

Hi MOT, good to have you back! The sites looking much better ahead of the new season so well done with that,

Extremely excited now, so much so that I've been twittering a countdown!