The omens were good for our trip to Hertfordshire and the home of Elton John's Golden Boys. There was an appropriate mixture of Blue sky, White fluffy clouds and Yellow sun as Welly, Happy Chocker and the Quiet One hurtled down the M1 in hope of seeing the mighty whites secure a precious win in our embryonic Championship campaign.  Welly took the mantle of newspaper reviewer as he scanned the Star & Sun for snippets of Football news.......................or he may just of got them for the pictures! News that Danny Graham was unlikely to play added to our general optimism as the ex Leeds player has a habit of ruining our day whenever he plays against Leeds. Various accidents and roadworks gave us extra time to debate the forthcoming game.  Somma and Mad Max must have done enough to start?  Can we keep a clean sheet? What will McCormack be like?  Why are there concrete cows in Milton Keynes?  These and many other conundrums kept the conversation buzzing all the way to Watford.

The pre match refreshments were provided by Jonty in the form of a very civilised BBQ at his pad in Watford to celebrate Noah's first ever Leeds match at the tender age of 4.  A gaggle of fellow 606ers had gathered to sample Jonty's (Noah's Dad) undoubted BBQ skills and fiercely debate Capt Birdseye's role in "running" the club. The final toast to Noah with Calvados was a nice touch. As I was driving I politely refused the lethal dose of spirit only to then discover little Noah sampling the spirit himself.  That might have something to do with him dropping asleep after one chorus of MOT at the game!

Watford's ground has all the feel of a proper provincial football club on three sides of the "stadium" until you get to the final unpopulated collection of precarious scaffolding gantries, redundant terracing and a random portakabin.  It reminded me of the room most people have in their house where all the rubbish gets dumped with a view to someday "sorting it out".  Of course that never happens....................neither will the development of the last side of Vicarage Road. 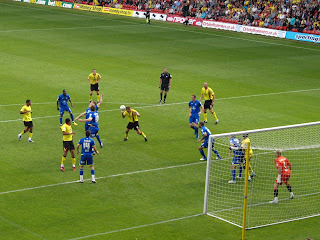 Lord Larry had stuck with the team that started the Millwall game and added McCormack to the subs bench at the expense of the sidelined Grella.  He must be feeling very similar to the last puppy in the pet shops window..............doesn't anybody want me?

Leeds started the game with confidence backed by yet another vociferous sold out away following in vast contrast to the "library atmosphere" in the home stands. By the disapproving looks we were getting from the Watford officials and fans our singing was about as welcome as a loud fart in the middle of the Sunday Sermon at the local church.  The hard working Becchio connected with an early corner to force a finger tip save from the well known England goalie, Loach, guarding the home goal. The following corner caused panic in the Golden Boys defence and as the ball pinged about in the box Johnson and and Howson attempted ambitious strikes.  The much maligned Bessone launched the ball back into the box where a Watford defender kindly headed the ball across to Becchio who rose like a leaping Salmon to head the ball goalwards...........................England's No 3 goalie could only flap at the ball and there was Capt Naylor on hand to stab the ball into the open net.  The hordes of mighty whites fans celebrated noisily.  Get in!  Beefy and Big Steve had chosen to go on a drunken trip to Wembley to see the Rhinos get stuffed.  Despite this I texted them the updated score.  I could tell from their reply that they were wishing they could be "teleported" across North London to join the Leeds team that was winning. 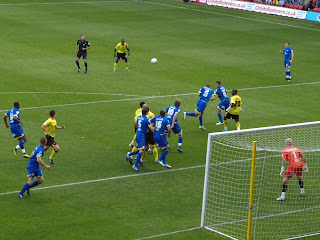 Buoyed by the goal and the ease at which our midfield pairing of Killa and Howson were getting hold of the ball Leeds started to get a good foothold in the match.  Sanchez Watt looked dangerous with his electric pace and nimble footwork.  Sam was quieter than of late and Becchio was showing more composure on the ball.  At the other end the sublime Schmeichel dealt with any threat from Watford with assured contempt no more so than when he rushed out to smother an attempted lob by Sordell.  Leeds were on top in a less than pretty game but that didn't phase the fantastic away support as they provided a continued wall of noise to accompany the efforts on the field.  Half time came with Leeds one up having enjoyed the majority of the play.  Neil Collins had won everything in the air and his fellow central defender, Naylor, had looked solid at the back with the exception of allowing a stinging header that Kasper swatted away like you would an annoying Wasp.............or Hornet?

Hughes replaced Bessone at half time presumably because of the Argentinians continued hesitancy in decision making when he's defending.  At times he seems to take far too long in deciding what he's going to do by which time his winger is long gone.  The second half was not a classic.  Watford's disjointed play relied on the long ball to their front two who weren't getting much change from Naylor and Collins.  There were more stoppages than an average NFL game.  Schmeichel seemed to snaffle anything that was launched into his box and the defence held firm.  Problem was that when we got the ball it was all a bit too rushed and instead of knocking the ball about and keeping possession we were drawn into a hectic war of attrition. 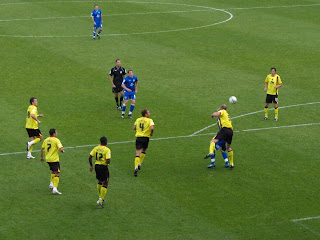 Mad Max and McCormack came on for the last quarter, Somma must have been miffed after scoring 3 goals in just over one game?  As ever Mad Max created havoc to both the opposition and his own team mates as he weaved one way and then the other.  One chaotic run ended up with a goal bound shot blocked that if it had gone in would have been a contender for goal of the season.  By this time though my watch was complaining that I kept staring at it as the minutes ticked slowly by and the pressure mounted on the Leeds back line.  I was screaming at the normally sensible Leeds players to just keep the ball instead of trying impossible moves and giving the ball back to the thankful Golden Boys.  The last ten minutes were torture as we must have had at least 4 chances to kill the game off on counter attacks only for the chance to fizzle out with 3 or 4 players then out of position.  McCormack so nearly poked home a chance and not surprisingly Bradders missed a couple of inviting shots on goal.

The final whistle was greeted with relief and joy by the Leeds fans.  A lusty chorus of the Leeds anthem, MOT, rang round the ground as the players thanked the fans.  All's well that ends well.  On the walk back to the car the frustration of the home fans was clear to see and hear bemoaning the fact that Danny Graham hadn't played and the rest hadn't got a clue.  Mr Grumpy from Watford made a point to me that "at least we don't have to put up all those thugs again until Millwall come down here"  I politely enquired which thugs and what they had actually done................"there's far too many of you and you make too much noise"?...........I raised a smile from another more more reasonable Golden Boy fan by asking "is it me"?

A well earned 3 points for Leeds that will add another deposit to their confidence bank.  MOM was a toss up between Schmeichel and Collins but in truth this is not a match that will stay in the memory long............other than Mr Grumpy's comments.

Next weekend is a free weekend due to international matches then we play Swansea, Barnsley and Donny all in one week.  If we can navigate our way through that testing week without losing there will be plenty more choruses of "Leeds are going up" being sung.  It's early days yet but something is stirring on Planet Leeds. I keep repeating the mantra of "never look at the league until after 10 games"............but it's hard not to smile when you peek at the table and see us in the play off places!  Don't you just love Football?
Roll on the mighty Jacks at home in two weeks time.  Having swatted the Hornets (Golden Boys) I'm looking forward to feasting on Roast Swan.
Can't wait.
MOT

Posted by Andrew Butterwick at 10:43

G'day MOT, thanks for another good match day report. You must be on the ball to have it out this time on a Sunday. Sounds like a good day out, how was Jonty's brisket?

Sounds like an average game, but better to score early and stay in front than chase the odd goal. While the clock goes slow when you're in front, its amazing how quick it goes when the score is the other way. No wonder they were grumpy!

Conctere cows? Maybe they were going to call the new franchise The MK Cows and had already made the mascots.

Enjoy the break next week, I'll look out for the next installment.

G'day Ozzie,
Jonty's brisket was superb. I had to smile when he said he'd been up at midnight on Friday to put it on his slow cooking BBQ. The concrete cows are alongside the M1 and were part of the "funky" design of the new town. Looks all bollox to me!
Thanks for reading.
MOT

Thought the match was truly dire. Horrible hoofball football from both teams with a referee that was determined to kill any tempo.

However scrappy they came, we got the three points so that's all that really matters. Hopefully a better performance in a couple of weeks time though as that was like watching paint dry!