A weekend of Lion taming ahead?

Strange how we've only played two league games and yet the season seems to have been going for a lot longer than 2 weeks?  Already we have been exposed to the harsh reality of life in the Championship in both games.  Thankfully we finally began to look as if we can compete in the countries 2nd tier as we turned last Sunday's game round at the County Ground with some more cohesive play inspired by Lloyd Sam.  There's no escaping the fact though that our threadbare squad is a huge barrier to making real progress this season as shown by the fact that the return to the squad of Davide Somma, an unproven striker who scored some goals for Lincoln last season and has yet to play in anger for Leeds, is hailed by Lord Larry and fans alike as a real positive.  Now I'm as optimistic as the next fan and I hope I'm proven spectacularly wrong as Somma completes his hat trick on Saturday.......................but you can see my point?

The weaknesses of the squad were well aired when I got together with Phil, Gary and Thom Kirwin for Monday night's "Matchday Replay" on Yorkshire Radio.  The lack of an effective defensive midfield holding player was one topic we were all in agreement.  Will we bring any more players in before the window closes? Who knows, I'm sure Lord Larry is aware of the areas that need strengthening in the team but the overwhelming evidence of the chasing of Gary Hooper and Billy Sharp is that we just don't have the money needed to persuade the necessary quality to up sticks and move to LS11.  That's why we have ended up with Billy Paynter.  Was he bought as a direct replacement for Beckford or did we get him to strengthen the squad with a view of bringing in a higher quality scorer aswell?  I think the latter.  Whilst I am definitely an advocate of running a Football club with financial prudence, can you here me Cardiff?, where all the money goes from player sales (Delph), extra revenue from Cup runs (Manure, Bindippers and Spurs) and above average home gates is frankly a bigger mystery than any thing Hercule Poirot has investigated in the last 70 years.  If Agatha Christie was still alive it could form the basis of her latest novel......"Capt Birdseye and the mystery of the empty wallet" 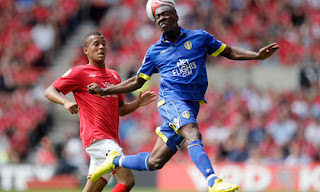 So onto this weekends lunchtime clash with the high flying, Jellied Eel, Pie n Mash munching friends from Bermondsey.  If I'm honest probably the last team we want to be playing at this moment in time as we adjust to the new league.  The Lions are a robust, well organised unit who play effective and not unattractive football and in Morrison, the striker they plucked from Non League, they have a real star.  Add to that our record against them in the recent past is nothing short of appalling, as the "bloke from the blog" proudly boasts, and our prospects are about as high as that of seeing the two sets of fans sharing cream teas in Betty's of Harrogate before the match!