"When Saturday Comes" one of the more palatable Football films must seem a bit odd to younger fans as a significant number of "weekend" games in the top two tiers of the English league now kick off at any time from Friday night to Monday night.  The mighty whites are caught up in kick off time drift for the second week running as we take on the Bluebirds from Cardiff just as "Corrie" will be getting into full swing on Monday evening. Sean Bean starred in the 1996 film as a young lad plucked from non league obscurity with Hallam to star in an FA Cup run with his beloved Sheffield Utd.  The film did use a certain amount of poetic licence as the "young" Sean Bean was actually a rather mature 36 years old when he took the role and scored the winning goal in the semi final played at Bramall Lane? 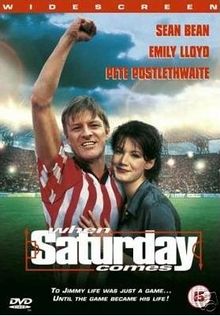 How Leeds could do with a hero to emerge from obscurity and fire the team onto success.  Davide Somma is the nearest we've currently got but he performs at the opposite end of the pitch to where our main problems lie......the creaky defence. In recent weeks even the normally calm Lord Larry has shown his frustration with his current set of defenders as goal after goal has flown into the Leeds net as a result of schoolboy errors.  The irony of the defeat against Leicester was that for all their dominance of the game the Foxes only bagged their goals when firstly Snoddy and then Mr Calamity Naylor made howlers of gargantuan proportions.  With a bit more care in front of goal they would have emulated Preston's fete of notching half a dozen at the Theatre of Hope.  The prospect of the free scoring, living beyond their means, Welsh Lamb lovers arriving at LS11 on Monday night to gorge themselves on our generous defence fills me with horror.  Alex Bruce should stiffen up the brittle rearguard but with still no sign of Kasper or Kissy returning to the fore in the near future things look bleak at the back.  The saving grace, if there is one, is the inherent inconsistency of the vast majority of the teams in this league.  This leaves the door open for any team who can put an unbeaten run together between now and next spring to march up the table and into the play offs. That team could be Leeds if the much debated defensive problems are resolved.  We live in hope.

Two stories have dominated the headlines this week, Mr Rooney's tiff with Fergie and the massive public spending cuts. The Rooney saga is unfathomable to me even in these times of a game dominated by who's got the most cash.  At a time when the country is facing probably the most austere time since the 2nd World war Mr Rooney decides he needs to better himself and somehow get a salary raise on his paltry £150k per week to lift him and his shy retiring wife out of the poverty trap.  After all they won't now have the child benefit to fall back on.  So Wayne clearly thought it was time for some militant action and utilising both his brain cells came up with a master plan.  He would plot his escape to those nice chaps across the city with more money than they know what to do with and in doing so show his scrooge like employers how tight they have been with him.  So after criticising his manager (forgivable I suppose), team mates and fans in an attempt to raise awareness of his plight he managed to then negotiate a more realistic weekly wage of £250k.  Simples.  Much as the pictures of a smiling Shrek with his arms round his gum chewing Manager suggest an amicable end to this sorry tale I beg to differ.  Surely even the Salford Yanks fans and their penchant for Prawn sandwiches can't be happy with their supposed world class superstar's imitation of a spoilt child throwing his toys out of his diamond encrusted pram.  After all it's not cheap following Manure...........when you've travelled 250 miles to a home match and had a couple of bottles of wine and a few Vol au Vents you won't get much change out of £150!  His lack of form combined with his petulant actions will have turned some of his own fans.  This saga hasn't finished yet me thinks.

So a free weekend for me to cut the grass, wash the car and avoid the dreaded retail therapy in preparation for our clash with Cardiff.  I notice all the shops are stuffed with goods ready for Halloween.............just hope we don't put on another horror show against Cardiff?
Can't wait.
MOT
Posted by Andrew Butterwick at 12:00