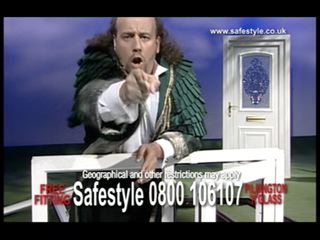 The grey weather that greeted us as we traversed down the wrong side of the Pennines was in stark contrast to the mood in the car.  The Happy Chocker, the Quiet One and yours truly were optimistically debating Leeds' chances of extending their current unbeaten run at the expense of a tough Burnley side. Other than the returning Paul Connolly, due back from suspension, we didn't forsee any changes to the team that beat Palace.  All was right with the world as we parked at Burnley Cricket Club and took advantage of their excellent hospitality.  In the club was the Safestyle Windows man.  You know the one who shouts "you buy one, you get one free, I say you buy one you get one absolutely free" in that annoying TV ad. He was proudly sporting his Burnley colours with his distinctive hair style.

My pre match positiveness was about to get a jolt though.  Cyberspace first alerted me to the fact that a certain Mr O'Brien was injured and would miss the game. Bollox! HC reminded me that we haven't lost since the Bolton loanee arrived. Could Bruce and Collins cope with the Burnley attack in his absence? Mmmm not so sure but after another pint I'd convinced myself that my winning 3.2 prediction was still sound!

Now 4,500 Leeds fans are always going to make some noise where ever they are.  Add to the mix a Roses derby, an unbeaten run lasting 7 games and our leading striker at the peak of his form and you get a magnificent cacophony of sound pouring out of the packed away stand.  Fantastic. The game started with both teams eager to establish the early authority.  Mad Max broke free and fizzed a shot towards goal.  Kasper was alert to stop a tepid free kick.  Snoddy set Mad Max free but his final ball didn't match his approach play. After an even first 15 minutes Leeds started to edge the tight midfield battle despite Bradders tendency to give the ball away. I was feeling quite happy.  Once again we were more than holding our own against a team who were recently hob nobbing with the Premier League elite.  What could possibly go wrong? 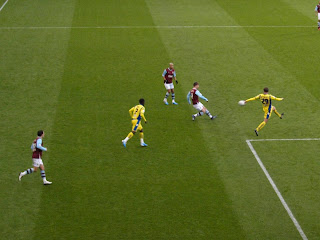 Well Burnley could score? Which they duly did.  Kasper showed his composure to turn a Burnley shot away for a corner in front of the Leeds hordes.  Bikey won the header....... the ball bobbled on the line and Easton was first to react to blast the ball into the roof of the net. 1.0 Burnley slightly against the run of play.  The goal didn't stop the vociferous Leeds fans though and we were so nearly level within two minutes as Collins flicked a corner inches past the post.  He should have scored.  Leeds pushed on and began to build some momentum only to be hit by a cruel sucker punch.  The Burnley goalie hoofed a 60 yard dive bomber down field which Bruce appeared to have easily covered.............until he was brushed aside with ease by Rodriguez who slotted the ball through Kaspers legs and into the net.  2.0 Burnley.  My pre match positiveness had now disappeared.  We didn't deserve to be 2 down.............but we were.  Doom and gloom descended on lots of Leeds fans shoulders.  Leeds were like a punch drunk boxer as they tried to clear their collective heads and get themselves back in the game.  The half time whistle brought an end to an enthralling and frustrating 45 minutes.  At least my 3.2 prediction's still on I suggested to HC. "I'll give you 100 to 1" he rashly replied.

The Leeds team sprinted out of the tunnel for the start of the 2nd half. They clearly meant business and their "never say die" spirit was evident from the restart as they tore into the Clarets at every chance.  Their  reward came very soon.  Snoddy was causing his usual havoc on the wing and when he cleverly picked out Bradders and Becchio at the far post with a cross the away fans held their breath in anticipation.  The ball fell invitingly to an unmarked Mad Max.......................who lashed the ball past a helpless goalie..............get in! 2.1 and game on. Leeds began to turn the screw with Snoddy and Mad Max to the fore but it was Iwelumo who should have restored the home side's two goal cushion as he headed a golden chance wide of Kaspers post. 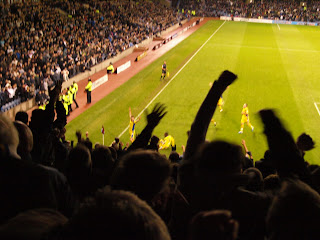 Lord Larry is a master at the art of substitutions so when he brought McCormack on for Killa after an hour and changed to 4.4.2 expectations rose a notch amongst the fanatical away support.  That expectation was justified within a couple of minutes as Connolly surged up field and found the fresh legged McCormack............he skillfully turned his man and laid a perfect ball into the path of Connolly who had continued his run.............Connolly hit an exquisite cross inch perfect to the man who costs less than Berbatov..........Gooooooooooooooooooooal Leeeeeeeeeeeeeeds.................Bedlam in the stands.........some stranger was hugging me like a long lost friend and Leeds were on level terms. 2.2.  Leeds were now like a runaway train.........unstoppable.  Johnson was inches away from silencing his critics with a rasping drive.  Snoddy glided into the box daring the full back to tackle him before shimmying and curling a shot onto the Burnley bar. "Marching on Together" was blasting out from the away end like I've never heard it before as the fans tried to suck the ball into the net.  McCormack was finding space with intelligent runs and could have scored twice with a bit more confidence.  Surely Leeds must score? And then they did as the clock ticked onto 85 minutes.  The now resolute Leeds defence thwarted a Burnley attack and Capt Fantastic, Jonny Howson, emerged with the ball on the halfway line.  He switched on his powerful afterburner and surged through the hesitant defence..............he could have laid the ball off but he didn't..............he swerved like a slalom skier past another Burnley defender and placed the ball in the corner of the net............Yeeeeeeeeeeeeeees..............total stranger is now hugging me like a long lost lover!...........3.2 Leeds and the noise from the delirious Leeds fans was deafening. The third goal stung the Clarets into life as they pushed forward to get the equaliser.  More heroics from the back four plus a superb save from Kasper protected the precious one goal lead.   The Leeds fans taunted the home fans with a chorus of "You should have gone Xmas shopping" Even the disheartened Burnley fans appreciated the dry humour of the celebrating army of Leeds fanatics.

The final whistle brought to an end an absolutely cracking game of football.  Leeds had turned round a 2 goal deficit in some style and in doing so are in danger of being accused of inflicting GBH on Burnley...........Gradel, Becchio, Howson.  The Leeds fans poured out of the ground in good voice as they celebrated a key victory that pushes them up to the heady heights of 4th in the table. Delicious!

The long delay in the car park didn't seem to matter a jot.  We had extended our unbeaten run to 8 and beaten another of our potential promotion rivals in a cracking game of football.  This is what God invented Saturdays for.  Don't be loosening that safety belt yet though.  As we saw today life is full of ups and downs when you support Leeds and there's still a long way to go in the season.  But we are looking good aren't we?  QPR up next at ER.  They seem to be stuttering of late.  Beat them and we would be 3 points behind them and possibly in 2nd place.  Now that would be nice Xmas present!
Can't wait.
MOT

Posted by Andrew Butterwick at 21:47

I very much enjoyed reading this match report, you painted a wonderful picture of the games atmosphere and events that took place on the pitch!

Have you considered entering the Fan of The Match competition, where first prize is a commentary day with Leeds United legend Eddie Gray?

(and please feel free to embed any of the videos, from the page on your blog if you feel they are relevant to you audience)

Hope to hear from you soon!

Luke,
Thanks for the comments on the blog much appreciated. I am already on the fans panel at Yorkshire Radio so I get to do the match day replay and the odd match.
MOT

I'm very impressed to hear you are on the fans panel at Yorkshire Radio!

Would it be possible to send you a press release and get you to feature a article about fan of the match on your blog please?

No problem. send the press release to andrew.butterwick@talktalk.net
MOT