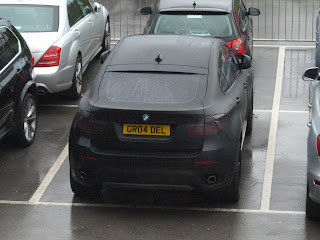 After last week's visit to the footballing aristocracy of Arsenal today's fixture against the peasants from Scunthorpe seemed a bit, well ordinary.  It didn't stop a healthy crowd of 25,000 making their way to the Theatre of Hope though to see the latest game in Leeds' promotion adventure.  The Happy Chocker, the Quiet One and yours truly were amongst the expectant fans quenching their pre match thirst in the Captains Lounge. Talk of 3.0 and 4.1 wins were floating about as the beer got work.  I think the days of thinking that a mid table position will do this season are now long gone as the reality of the golden opportunity that lies before Leeds hits home with even the most pessimistic of Leeds fans.  From our vantage point of the Capts Lounge we could see the first of the hopeful fans queuing for any unclaimed season ticket seats for the Arsenal game.

News of George McCartney's return to the team was widely welcomed along with another start for Sanchez Watt. The miserable wet weather that descended on West Yorkshire as the game kicked off didn't dampen the fans post Arsenal euphoria but it did put a bit of a damp squib on the first 10 minutes as both teams spluttered into life. Watt was looking lively though and it was he who sparked the game out of it's slumbers with just a quarter of an hour played.  Snoddy won a header and guided the ball towards the gangly Watt who easily turned his marker and strode towards the penalty area before unleashing an unstoppable shot that left the goalie clutching at thin air. 1.0 Leeds.  That's better.

Fired up by the opening goal the Leeds attacking machine moved smoothly up through the gears and destroyed a poor Scunny defence. Live wire Watt was electrifying as he strove to secure his place in the team.  His tenacity won the ball just inside the Scunny half...............Snoddy took over and delivered a perfect pass through a Scunny defence that parted easier than Jordan's legs.............Mad Max latched onto the ball before bamboozling both the goalie and the last defender with a clever step over and walking the ball into the net.  2.0 Leeds and we were cruising.  Any thoughts of a hangover after our exploits at the Emirates were well and truly ditched.  Kasper was having a nice relaxing time watching Leeds dismantle Scunthorpe piece by piece without really breaking sweat. We didn't have to wait long for the next goal as Snoddy picked an horrendous pass out of the Scunthorpe defence and headed for the disintegrating Iron rear guard.  An attempted one two was blocked but the ball ran sweetly to Bradders who dispatched the ball from 20 yards to put Leeds three up and the clock hadn't passed 30 minutes.  Delicious!  No way can we lose a 3 goal lead can we?  Who mentioned Preston? 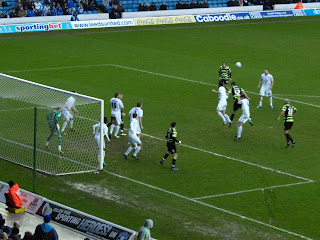 Gradel, Snoddy, Watt and Becchio were like kids let loose in a sweet factory as they swaggered about the pitch tormenting the rusting Iron defence.  Another neat move saw the ball swung into the box at pace..........Becchio appeared like a rapier only to see his header fly over the bar.  Mad Max played a delightful reverse ball to release Watt whose attempt was blocked desperately by the beleaguered goalie.  HC had wagered on a 3.0 win for Leeds but I couldn't see the score remaining as it was.  I helpfully suggested a 6.0 final score!  Half time came and Leeds got a deserved ovation for an impressive show of attacking skills in the first 45 minutes.

The urinal philosophers were clearly satisfied with the what they had seen so far as not one of them mentioned the game as the half time relief ritual was played out in a crowded gents.  Lot's of talk about which boozers were the best at Arsenal but nothing about the match.  In "Leeds" speak that means we're playing bloody well and there's nothing to moan about.  A very rare occurrence but it's not the first gents debate this season that has reached that conclusion.

When the Scunthorpe management team analyse the first half they may want to re-consider their choice of away kit.  The players must feel embarrassed turning out in a kit that makes them look like a team of extras for the Vodafone pay as you go Bee advert. 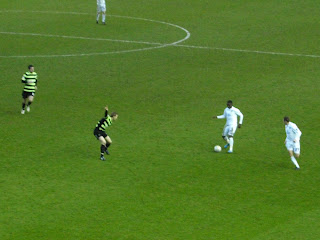 The 2nd half didn't quite live up to the first half's excitement as Scunthorpe meekly accepted their fate.  Billy Paynter had replaced an injured Becchio relishing a chance to opening his scoring account for the mighty whites.  Watt nearly scored again in the opening attack of the half as he found space at the back post to meet a cross but the goalie saved easily.  There were a number of chances for Leeds to increase their goal difference but as the half progressed HC's 3.0 bet looked increasingly safe.  Gradel smashed a lay off from McCartney against the goalie.  McCormack had the ball clipped off his toes on the penalty spot and Paynter's shot was blocked by McCormack on the line.  Leeds didn't look in any trouble as the entertainment value of the game dropped.  The introduction of Somma livened up proceedings.  He does look dangerous when he comes on for the last 15/20 minutes of a game and he didn't disappoint. Mad Max was the architect of the move as once again the Scunthorpe back four did an impression of the Jordan's widening limbs which left Somma in acres of space.  He finished with the coolness of a Polar Bear sat on a mountain of ice. 4.0 Leeds. HC didn't know whether to laugh or cry as his 15 to 1 bet disappeared into the night sky.  The cheese wedge was now emptying of away fans quicker than you could say "not another 4 goals against Leeds"

The final whistle blew on an impressive performance from the ever improving mighty whites.  The Iron looked in turmoil and on this performance will be lucky to avoid the relegation fight but Leeds can only beat what's in front of them and today it was not much.  Leeds' attacking prowess just grows and grows.  That's 50 goals we've scored in the league this season and with players such as Watt, Snoddy, Gradel and Becchio in this form I can only see that total increasing rapidly.  O'Brien had another assured game at the back with Bradders once again putting an impressive shift in the defensive mid field spot. Things are looking good on Planet Leeds.

The mood of the departing crowd was mixed.  Pleased with a good win bit disappointed that they had missed the adrenaline rush of a see saw game that we are usually treated to in LS11.  Some were even suggesting boring as a description of the match.  I know Leeds fans are notoriously hard to please but complaining that a 4.0 win is boring........................well that's just barmy!

Posted by Andrew Butterwick at 20:37

Great reading your match summary as usual. The downs before the game were that we've only managed 3 points out of a possible 12 over the previous four matches. Let's hope for a run of wins MOT.

Thanks for keeping me updated on the matches at ER, as I Live in Scotland nowadays it's hard to get to games. I always look forward to readng your unbiased reports from the mighty whites, cheers all the best keep up the good work.

S Walton,
Thanks for the feedback, most appreciated.
MOT