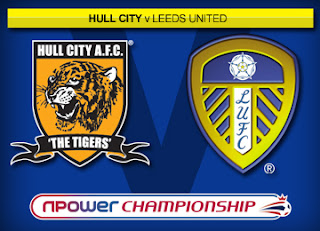 News that my boss had kindly arranged a meet for me with the FD from our main board at 5pm when the only realistic way I had of getting to the KC stadium for the match was the 4.37pm train from Piccadilly Manchester left me with a dilemma.  Could I come up with a strong enough reason not to attend what was a very important meeting and disappear early for the train or should I meekly accept the arrangement, protect my career and miss the match?  As the train pulled out of Piccadilly station with me on board my phone went.................the name on the screen was my boss's.....................I held my breath, had I over stepped the mark with my convoluted reason for letting down one of the most influential people in the business?..............."Just checking your still ok for our meeting in the morning?" he enquired.  Get in..............1.0 to Leeds!

The 2 hour journey gave me plenty of time to consider the possibilities for the game with our nearish neighbours down the M62.  Would Kilkenny come back into the starting line up? Would the mini weekend break have a positive or negative effect on Leeds. Can Leeds unlock one of the stingiest defences in the league? Will there be a decent pie at the ground for my tea?

The Happy Chocker and the Quiet One were already in the ground as a crossed from the train station to the impressive looking KFC Stadium.  After waxing lyrical with Adam Pope on Radio Leeds on the lack of incoming transfer activity, Leeds chances tonight and the latest cock up with the away phase ticket allocations I joined my partners in crime ready for the kick off.  Somma replaced Watt in the starting line up as a sell out crowd pumped up the volume.  Funny how, as with all of our Yorkshire neighbours, the Codheads seem to have this pathological hatred of anything Leeds and yet whenever the mighty whites are in town the home club coincidentally have their largest crowd of the season?  I suppose it's a back handed compliment.  The rivalry between Hull and Leeds is a bit like unrequited teenage love though as the Leeds fans clearly showed with an early chorus of "you mean f*** all to us" in response to the vociferous early baiting of large travelling support.

Hull were out of the blocks quicker than Usain Bolt.  Before Leeds could draw breath Hull split Leeds open down the right and sent a perfect ball into Mclean who made an horrendous hash of a simple tap in.  He seemed to stub his foot into the turf and take too much divot sending the ball high into the grateful Leeds fans behind the goal. Unfortunately that was just a starter for ten as Hull tore into a hesitant Leeds in the first ten minutes.  The famously fragile Leeds defence looked decidedly dodgy.  At the other end Bradders saw a header go wide, McCartney hit a sweet shot that the Hull goalie saved and Snoddy went ballistic with the ref when he was convinced a Becchio header had crossed the line.  Hull were looking sharper in attack though helped by some woeful marking and organisation by the Leeds defence.  Leeds' 4 man midfield was submerged by the fizzing Tigers engine room as Kasper stood alone between Hull and a cricket score.  He tipped a viciously dipping volley over the bar followed quickly by a stunning save from an unchallenged header.  His furious berating of his own defenders was only equalled by my "advice" to the same individuals from the stands.  Was the Tuesday night curse going to strike again I suggested to HC.  He didn't say no.

Just after the half hour Kasper couldn't hold the black and amber tide at bay any more as yet another example of Leeds losing the ball and failing to pick up runners allowed Fryatt to slot the ball coolly into the Leeds net. 1.0 to Hull.   The 20,000 Codheads celebrated as if they had just won the lottery.  Worse was to come as the Leeds defence went missing as Hull poured forward.  Nigel Pearson's teams have always been well drilled at set pieces so its no surprise that every free kick and corner that sailed into the Leeds penalty area had the 3,000 travelling fans clenching their buttocks. 5 minutes before half time Hull were two up as Chester was allowed to bundle a cross into the net unchallenged. 2.0 Hull.  20,000 Codheads were now wetting themselves with excitement as they taunted the Leeds fans.  "Well it's either going to be a Barnsley or a Burnley game tonight" I commented to HC.  "Fucking Barnsley...........nailed on the way we're playing" a disappointed HC replied.  He spoke the majority opinion amongst the hardy Leeds fanatics. 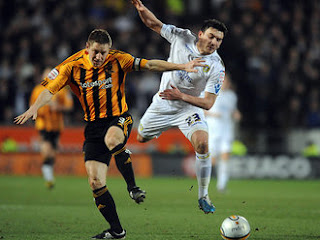 Leeds are nothing if not fighters and we might have one of the most porous defences in the league but we do know how to score goals.  So when we were awarded a free kick 25 yards out and  Snoddy told Bradders to go forth and multiply because he was taking this one a flicker of anticipation rippled through the away fans.  That flicker turned into a mighty roar as the flying Scotsman curled in a "Messiesque" shot that left the home goalie standing. 2.1 and a much needed lifeline for Leeds.  The half time whistle blew with Leeds just one goal adrift.  It could have been much more.

It was a different Leeds team that stepped out of the dressing room for the 2nd half buoyed or berated by Lord Grayson's words of wisdom.  Snoddy was now in overdrive and giving the miserly home defence serious cause for concern. Howson was suddenly bursting from midfield on those familiar lung bursting runs and we were actually winning some of the 2nd balls something we failed to do in the first 45 minutes.  Our reward came on 55 minutes.  A long throw into the box caused mayhem in the Hull defence allowing Somma to swoop and crash a shot against the bar and down over the line............or was it?........Snoddy followed up and made sure. 2.2.  All of a sudden the Tiger's roar was silent. "2.0 and you f***** it up" the Leeds fans gleefully reminded their East Yorkshire "rivals"  In just over ten minutes this had changed from a "Barnsley" performance to a "Burnley" performance.  Now all we needed was the winning goal.

Nervous tension engulfed the stadium as both teams went near to pinching a winner.  Every corner Leeds conceded created havoc.  Twice the ball was somehow cleared off the line after further unchallenged headers.   At the other end Mad Max was causing his own mini typhoons of problems for Hull without quite supplying the killer ball.  In the end the game fizzled out to an honourable draw after a long stoppage for the treatment of the injured Rosenoir who was caught by a flying arm from Lloyd Sam.

A point at a resurgent Hull City is a good point and we remain in the play off places but once again the defensive frailties of the Leeds back four were cruelly exposed.  Their marking, talking and organisation was Sunday league standard at times I'm afraid.  Lord Larry needs a good defensive coach and quickly if we are to take advantage of this wide open division......................I'm available Larry you've only got to ask!

Most fans went home happy.  A caller on Radio Humberside summed Leeds up perfectly as having the worst defence to visit the KC this year but by far the best attack.  Not a lot to add to that.  Coventry up next at the Theatre of Hope with their robust long ball game.  Time for a return to 4.5.1 and a certain Mr Kilkenny to start?  Time will tell.
Can't wait.
MOT

Posted by Andrew Butterwick at 21:22