Confidence was oozing through my veins as I made the trans Pennine dash to Elland Road for our clash with the whippet loving Barnsley Tykes.  After all Leeds were on a run that had seen them lose only once in 19 games in comparison to the Reds awful away record of only 3 wins and a negative goal difference of minus 18 away from the home comforts of Oakwell.  What could possibly go wrong?  The Happy Chocker was a tad more nervous though due to the fact that he works with hordes of Barnsley fans who still have fond memories of a certain night in September when they annihilated Leeds 5.2.  "We can't possibly play as bad as that again" I suggested to him.  He still looked white with fear and reminded me of our apparent inability to win on a Tuesday in the league this season!

The team was unchanged from Saturdays titanic effort against Norwich so the unlucky Somma could only warm the bench despite his phenomenal scoring record.  Barnsley fans had come in force and were soon ratcheting up the atmosphere as the game kicked off on a grey miserable night in West Yorks.  Mark Robins, the Barnsley boss, is a shrewd manager and I am sure that he will have sent his troops onto the Elland Road pitch with the clear instruction to quieten the crowd in the first 20 minutes.  He got his wish within 2 minutes.  Mark Clattenburg, the Premier league ref with a reputation of handing out more yellow cards than he has hot dinners, started the game as he meant to go on with the first of a number of dubious decisions as he gave a soft free kick to Barnsley 35 yards out on the right flank.  The ball into the box was a poor one but by some miracle the generous Leeds defence allowed it to run to the back post unchallenged where Shackell eventually smashed home the bobbling ball without a white shirt attempting to block him. 1.0 Barnsley. HC looked physically sick as his mobile rung with an ecstatic Barnsley fan goading him on the other end of the line. Not for the first or I suspect the last time this season our defending was reminiscent of a Sunday League team who had been out celebrating the night before...............so frustrating.

Barnsley, buoyed by their early goal, looked confident as Leeds tried to draw breath. Gradually Leeds shook off their lethargy and started to create chances.  Snoddy drove over the bar after good work from Howson and a miscued attempt from Bradders.  Gradel went close with a looping header and then swung in a teasing free kick that the Barnsley goalie Steele let through his fingers only to be saved by the bar.  Next the ball was looping to an unmarked Becchio just 6 yards from goal but his attempted volley went embarrassingly off at right angles into the kop.  Leeds were beginning to take control though and soon got their just reward on 23 minutes as Mad Max teased his full back before laying the ball back to Killa who swung a far post cross onto the grateful Becchio's head.  1.1.  The Barnsley goalie, Steele, was in no man's land as Luciano scored the goal. Leeds took the opportunity and grew in confidence.  Snoddy was starting to purr and Mad Max was as illusive as ever.  At the other end Barnsley broke dangerously and O'Connor should have done better with a good chance as he blasted it over the bar.  Next Capt Fantastic had an elegant run that ended with a curling shot the nervous Steele dealt with well.  Things were looking good for Leeds. 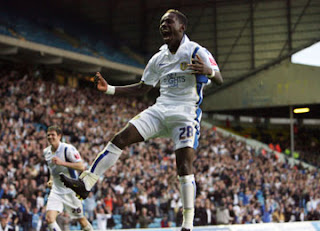 On 37 minutes Leeds took what should have been a decisive lead.  Gradel was released by a neat pass and  fell as he tried to get the better of the last Barnsley defender. Clattenburg pointed to the spot much to the surprise of most fans in the ground including me.  Still makes up for not getting the shout for Billy Paynter's one on Saturday.  Mad Max coolly slotted the ball home and we were 2.1 up and cruising.  Barnsley were rocking as Leeds turned the screw. Bradders should have made it 3.1 as he latched onto a ball 7 yards out but his firm shot rattled the post.  What is it of late with Leeds and the woodwork? Half time came with Leeds  back in control after the early shock.  That'll do nicely!

The start of the 2nd half was just as big a disaster as the first as within a minute the Barnsley left back was allowed to run unchallenged into the box and fire home past Kasper. Where were you Mr Snodgrass? 2.2.  Bradley Johnson was not having one of his better games. So when he lost possession easily in the middle of the pitch and then bundled over a Barnsley player the crowd were berating him for conceding a stupid free kick little realising that Mr Clattenburg had brandished a 2nd yellow and then a red.  Down to 10 men and still over 30 minutes to go.  Things were now looking bleak.  Howson and Kilkenny formed a midfield two with Snoddy and Gradel on the wings but they were soon submerged in a red midfield tide that threatened to turn the game in Barnsley's favour. Then Bruce had a chance to put Leeds ahead when he found himself free at the back post but his header was quite frankly pathetic.

Lord Larry took swift action to address the failing mid field as Watt and Somma replaced Snoddy and Becchio enabling a tight threesome in the centre mid with Gradel and Somma leading the line.  It immediately paid dividends as Mad Max wriggled in from the left and fired a superb shot past the rusty Steele in the Barnsley goal. 3.2 Leeds and 20 minutes to go for the 10 man Leeds team.  Squeaky bum time.  Barnsley tried to get the ball wide at every opportunity to test the Leeds formation.  I had gone into last 10 minute mode as I nervously held my head in my hands.  The clock had stopped as it always does when we're hanging on but the remaining 10 men were battling valiantly.  Then they threw it all away with a further display of Sunday League defending.  Barnsley got another soft free kick 25 yards out.  Kasper's wall parted like the Red Sea did under Mose's command as a weak shot went through the non existent defensive barrier and bounced softly into the net. 3.3. Bollox.  That all too familiar Tuesday night sick feeling returned to the pit of my stomach as we held on for the remaining minutes before Mr Clattenburg brought to an end an immensly frustrating evening.

Very disappointing, even more so as other teams around us gave up unexpected points. 4 draws out of the last 6 games have put a brake on our promotion push.  We are still well placed but the worry is the way we are defending or not as the case may be.  "I hate to think what Swansea will do to us if we defend like that" HC asked as we sulked our way back to the car.  We created enough chances to win this game.  Scoring three goals at home should win you games but the way we capitulated for each of the goals has that inevitable consequence of totally draining any confidence the fans have in the Leeds defence.  The fact that we are still in the promotion race is down to the phenomenal amount of goals that we score which is good...... but unless we find a way of plugging the leaking defence the good ship SS Leeds will be heading for the rocks of glorious failure in their attempt to secure back to back promotions.

The long trip to Swansea awaits on Saturday.  Up at silly o'clock to make it down for the lunch time kick off. Mmmmm will there be new faces in the line up? Can we find a way of keeping a clean sheet against the free scoring Swans? Time will tell.
Can't wait.
MOT

Posted by Andrew Butterwick at 00:25