Thankfully the gale force winds from the previous day had receded  as the Happy Chocker, the Quiet One and yours truly followed our well worn route to the Theatre of Hope for the clash with the Sky Blues of Coventry.  The inevitable Hen Party from Hull were on board the train as we joined at Selby.  Champagne corks were popping and the chatter was incessant as the girls managed to expand a simple statement by the bride to be  of "I tried some of that Nicorette gum last week" into a full blown debate on the effectiveness of various methods of stopping smoking that would have been worthy of the Oxford Union.  If ever an example was needed to show the subtle difference between men and women that was it.  In your average group of men that conversation would have got no further than the answer to the question "did it work?  Yes"

The debate amongst the Leeds fans on board was more serious and succinct.  Would Killa get a starting place? Exactly what did Marlon King do? Will we keep a clean sheet?  The last one was met with justifiable derision by those fans who had witnessed the woeful defending at Hull.  As we alighted at Leeds station the Nicorette debate was still in full flow with the party now wearing Cheryl Cole face masks.  I wonder if they have come to a conclusion yet?

Justin the the beer monster and Carlos joined our happy throng as we boarded the shuttle bus for the final leg to Elland Road.  The grey wet miserable weather didn't dilute the cautious optimism on board as unanimous predictions of a Leeds win filled the air. This euphoria at the prospect of taking 3 points from a depleted Sky Blue team mixed with a couple of pints of Boddingtons saw me heading for the bookies to place a bet on a 5.1 Leeds win! I did also try a more realistic punt on either Snoddy or Somma getting the first goal. 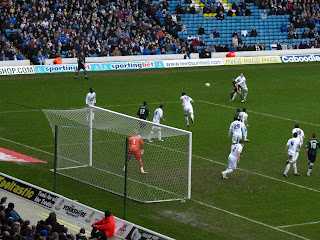 The team news was no news as the same starting 11 from Tuesday took the field.  The only change on the bench was Nunez in for McCormack.  For someone who doesn't play that much Football McCormack does seem to pick up a lot of niggling injuries?  As the game kicked off a healthy crowd of 27,000 settled back to enjoy what was hoped to be a relatively easy afternoon against a struggling Coventry side who had lost their last 3 games. The opening salvos didn't exactly set the pulses racing as Aidey Boothroyd's team negotiated a difficult parking manoeuvre for their proverbial bus in front of the Leeds goal.  Leeds' dynamic flying wings, Snoddy and Mad Max, were soon in the groove though.  Max in particular seemed to make space for himself in the tightest of situations and then with a twist and a turn emerge with the ball running towards the goal as if the ball was tied to his foot.  Twice he created chances for himself only for his finishing to let him down.  On the other wing the unfortunate Coventry full back was applying to join the "Just how the fuck do you stop Robert Snodgrass?" club.  I'm told membership of that club is now severely over subscribed.

The momentum was with Leeds as the game crept past 15 minutes.  The first gilt edged chance went to the reliable Luciano, who scores more than Berbatov.  Snoddy turned his full back inside out once again and delivered a pin point ball beyond the centre half into the path of the Argentinian who then stabbed his shot wide from seven yards.  Very unBecchio like.  But it wasn't long before he was missing an even better chance as Mad Max set up the overlapping McCartney to pull back a perfect ball to Becchio...........26,000 Leeds fans shouted goooooooooooooal in unison only for him to mis hit the shot and the ball roll agonisingly wide.  Maybe the 5.1 bet was a bit rash?

Coventry were restricted to balls into their giant centre forward, Platt, but inevitably these caused a significant amount of nervousness both in the Leeds defence and the Leeds crowd. The game that couldn't possibly end 0.0 headed for the break goalless.  More chances flowed for Leeds...............Bradders hammered a cross that appeared to be handled in the box and Connolly finished off a weaving run with a less than powerful shot on target.  Half time came with the scoreboard reading a frustrating 0.0 scoreline.  A ripple of grumpy frustration from the crowd escorted the teams down the tunnel.  That frustration was captured in the half time Gents debate as the urinal philosophers gave their considered views on the first 45 minutes.  "Gradel wants to learn to shoot" one person harshly observed........."Can't see us scoring today" one other commented on the league's most prolific scoring team..............."Somma doesn't do enough work" an ex member of the Beckford's a lazy bastard club offered.  If Sky are looking for a pundit to replace Andy Gray's incisive comments they could do worse than put an advert on the gents wall in the Capt's Lounge gents! 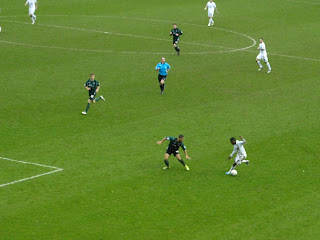 Lord Larry's pep talk seemed to inspire Leeds as they sprung into life after the break.  There was an extra fizz in their play as they fired towards the admiring Kop.  Mad Max was again to the fore as he cruelly tormented the Coventry defence with his wing wizardry.  Finally his persistence paid off as he stepped one way then the other and left the full back for dead before delivering a deep cross for Capt Fantastic who neatly laid it back for Somma, who had lazily run into the box, Goooooooooooooooooooal! Kerching££££££  1.0 Leeds.  Relief spread around the famous old stadium as if it had just swallowed a whole bottle of Nurofen.

I could still get my 5.1 I suggested to HC. His eyes nearly became detached from his skull as he rolled them violently!  Leeds now looked to take control and get the much needed cushion of a 2nd goal.  Snoddy had turned on his turbo booster and was delivering a master class in attacking wing play.  It's difficult to remember him actually been tackled all afternoon?  The superb Westwood in the Coventry goal had to be at his best to keep out a tantalising curling shot, not dissimilar to the one that beat him at the Ricoh.  Leeds were finally in cruise control but the score remained doggedly at 1.0.  Most people in the ground thought Somma had made the game safe on 70 minutes as he lazily anticipated a Becchio flick on and finished in style by lobbing Westwood from 30 yards.  The linesman's flag deflated the celebrations.  Dubious I would say. 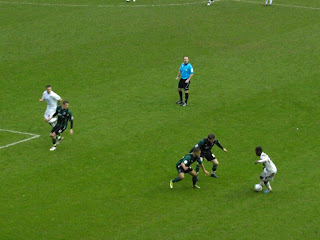 As the game entered the last 15 minutes Leeds attacked at will to try and increase their lead.  Bruce thought he was a centre forward as he turned and nearly beat Westwood with a low shot but Leeds' reluctance to shut up shop and protect their lead had their legions of fans once again giving in to the urge to bite their nails.  Becchio again ended up with a bandaged head as he clashed painfully in the box.  His touchline change of kit to replace the blood spattered shirt and shorts amused the crowd.  I didn't realise he wore Y fronts?  Paynter and Killa came on for the last throes of the game. Coventry threw off some of their shackles in an attempt to pinch an equaliser.  Balls were launched into the Leeds box and the ball pinged about alarmingly as the Leeds defence battled to keep a clean sheet.  Did I just say clean sheet?  Kasper ensured we did with another class save as Leeds negotiated 5 nerve shredding minutes of added time.  The final whistle sounded to confirm another 3 points banked in the promotion vault for Leeds.  Mad Max and Snoddy were outstanding today if only our finishing matched our approach play we would have won 5.1!  Don't think I'll get paid out on that though?

The 1.0 scoreline didn't reflect Leeds' superiority in this game.  Somma's goal, his tenth in ten starts in the League, was precious for our promotion push and helped lift us into 5th spot.  The scramble for the automatic spots is as wide open as ever but another win for Nottingham Shrubs sees them takeover the 2nd spot.  They are definitely the current form team.  Still time for them to have a late season blip though just in time for their visit to ER.

A long trip to Bristol next week.  They have shown some form recently that means another tight and difficult match in store. 3 points from that one and we will be flying.
Can't wait.
MOT

Posted by Andrew Butterwick at 11:22