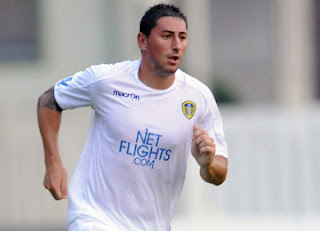 "I'll see you at the match on Tuesday" is a phrase I've come to dread this season. 8 Tuesday league games, no wins and too many embarrassing performances to mention the worst being the 6.4 reverse against Preston in the reverse fixture at the Theatre of Hope.  So understandably I had mixed feelings regarding our prospects against the league's bottom club on this particular night.  The Tuesday curse was hanging heavy in our thoughts as I rendezvoused with the Happy Chocker and his brother at the wonderfully named Royal Garrison pub near the famous Deepdale stadium.  Not surprisingly it was packed with Leeds fans enjoying a liquid tea.  As we discussed the merits of Billy Paynter starting in place of Becchio and the dreaded curse the jukebox sparked into life..................."we've been through it all together, and we've had our ups and downs" crackled from the digital music box.  They've only got the magnificent Leeds Utd anthem on the jukebox. The pub was soon rocking with an early lusty chorus of MOT.  Carlsberg don't do perfect Away fan's pubs.............but if they did The Royal Garrison would be in the top one!

Lord Larry's team selection did raise some eyebrows. Luciano did go off on Saturday.  Was he injured or rested?  He was still on the bench so he must be fit.  We surmised this was another master stroke from Lord Larry in resting Becchio for the tough run in and giving "Come on Billy" a chance to prove his worth against the robust PNE defenders. Once we had joined the rest of the fantastic 5,000 away support in the impressive Deepdale stadium the weather turned nasty as persistent rain tried to put a dampener on proceedings.  Barry Bannan, the new midfielder was on the bench as the game got under way.  What we needed was a steady start where we took control of the game and squeezed the life out of Phil Brown's desperate charges.  What we got was a hesitant start in defence as two yellow shirted defenders stood off Treacy allowing him to hit a screamer that beat Kasper and rebounded back off the bar.  HC and I exchanged our familiar Tuesday night frown.  Kasper was soon making amends though with a quick thinking clearance that released Capt Fantastic, Howson, who controlled the ball and was soon free on goal but his left foot shot sailed harmlessly away into the Preston fans behind the goal.  Mmmm this had all the makings of a typical Tuesday performance and there's less than 10 minutes gone I mused.

Chances flowed at each end with a heavy helping of defensive mistakes.  Kasper was called into action to beat away a speculative shot whilst Mad Max was wriggling and writhing past defenders to create chances for Leeds.  Neither the conditions nor the basic robust tactics of the home team allowed for anything other than a good old fashioned "arm wrestle" with the ball earning lots of air miles in the first 25 minutes.  The bald headed Hulme looked dangerous every time he got the ball.  Not for the first time against Leeds.  The Youf's in the home crowd tried to taunt the vociferous Leeds fanatics with the factually correct chant of "4.1 and you fucked it up" which got an equally factually response of "Job done and you fucked it up" with reference to our epic play off battle last time we graced the higher echelons of the Championship.

As the game approached the half hour mark there had been little evidence that Leeds were going to break the curse, in fact if anything the home side had looked the most likely to score in what was a very scrappy opening.  Then things changed.  Snoddy got hold of the ball and weaved his way into the box before delivering a teasing ball into the heart of the Preston box................a tame clearance from a PNE defender ricocheted to the edge of the box where Kilkenny literally passed the ball side footed beyond the reach of the tall home goalie into the net. 1.0 Leeds against the run of play and relief amongst the 5,000 celebrating Leeds fanatics.  Maybe, just maybe this was the night we win ugly?

Leeds visibly grew in confidence with the advantage of the goal and the new cult hero, Billy, began to find space beyond the Preston defenders.  Twice he got shots away that threatened the porous Preston goal. On the break Preston, and Hulme in particular, looked a handful for our tentative back four.  Andy O'Brien was not having his best game as possession was yielded far too frequently for the good of my heart.  Remarkably we reached the half time break with our goal intact.  History and the Tuesday curse suggested this would not remain for much longer.

The second half started with Leeds attacking the noisy end that housed the Leeds fans.  Our fragile confidence was tested soon into the half as a Preston goal was chalked off for offside.  Much as relief poured from the Leeds end at the premature Preston celebrations it was a timely reminder of our defensive frailties.  "We need another goal" I picked from the back catalogue of well worn Tuesday night phrases. A flowing move on the counter nearly resulted in the much needed 2nd as Mad Max screwed a shot agonisingly close.  But  we didn't have long to wait long for a precious 2nd.  Billy Paynter rolled his defender as a high ball came into the box leaving him free to rifle in an unstoppable shot past the Preston goalie and cue delirious celebrations by the travelling army.  We do like a cult hero as Andy Hughes knows well.  The King is dead long live the King! Billy and his team mates showed their collective joy at the goal before Billy gave a Leeds salute to his new fans.  "Billy, Billy" reverberated round Deepdale.  The home fans looked glum.

Two moments of class had put Leeds in charge of a game that oozed mediocrity but we were soon to be pegged back by a stunning strike by Ian Hulme as he hit a swerving shot from 25 yards that left Kasper grasping at wet fresh air. 2.1 Leeds and the old Tuesday night nerves resurfaced.

The artistic Paynter should have settled the game and 5,000 nerves when he pounced on a defensive mistake but he saw his scrambled shot from 4 yards graze the wrong side of the post.  From that minute on it was torture for the long suffering Leeds fans as Preston threw everything but the kitchen sink at the creaking Leeds defence.  Heroic last ditch tackles and headers clear were now happening every minute as my throat became drier than the Gobi desert and my stomach had more knots in it than a cheap piece of skirting board.  Unfortunately I had seen this desperate defending too many times to have much confidence that we would hang on.  Every misplaced pass was returned with interest by the eager Preston team.  I looked at HC hoping to gain some inspiration but all I saw was "that" Tuesday look.

After what seemed like incessant pressure a ball was floated to the back post beyond the Leeds defenders where a Preston head rose to head home a certain goal....................Oh fuck..................but out of nowhere came Kasper flinging his considerable frame into a flying star towards the ball and beating it away.  Fantastic. Nayls came on to bolster the defence and Bannan played out an impressive cameo as Leeds fought tooth and nail to preserve their one goal lead.  The relief at the final whistle was multiplied as results from elsewhere filtered through, faltering Forest had lost, Cardiff had lost as had QPR and Swansea had drawn.  Leeds were now in 5th only 3 points behind automatic promotion.  Delicious!

So the Tuesday curse was finally exorcised and Billy finally got his goal.  That's two yes's from Meg Ryan, now we just need the climax of promotion to send everyone into ecstasy. Watch this space!  The game was not a classic but at this stage of the season it is definitely points that matter and with just 10 games to go we are well placed to pinch that final automatic spot.  7 wins should do it me thinks?  The defensive problems are still live and kicking though.  As ever keep those seat belts tightly fastened this rollercoaster ride just gets better and better.  Ipswich next on Saturday.  It would be nice to get wins 1 and 2 of the 7 against them and the following week against the Blunts? Come on Leeds, come on Billy you can do it!
Can't wait.
MOT.


Posted by Andrew Butterwick at 21:20

Hi Andrew. Olav from Norway here. Have not been successful getting a ticket for the Sheff u game. Honestly, how do you rate the possibility to buy a ticket outside the ground for a price of let`s say max £50? Just a desperate question:-). Olav

Its possible. I still haven't got a ticket for Sheff Utd yet. I'd keep looking on the various web forums such as WACCOE. there's sometimes a few tkx floating about on there.