Bright and chilly sunshine greeted us as we reached the outskirts of the Steel city for the lunchtime clash with the Blunts.  After a week of successful ticket harvesting I had managed to secure tickets not only for myself but the Happy Chocker and his brother Chris.  Anticipation was on medium heat as we quaffed our pre match refreshments in the pub with Big Steve.  I was hopeful of a return to our free scoring ways after last week's no show but Big Steve was a little less optimisitic.  News that Bannan was to start along with Becchio for Killa and Paynter respectively showed that Lord Larry was picking from strength unlike his counterpart at Sheffield who had a host of injuries to cope with. In the home ranks were ex Leeds players Vokes and Lowry who even there own family would admit didn't have the best of times at Elland Road.  So against a team struggling to avoid relegation, hit by injuries to some of their better players and starting with two ex Leeds players who didn't impress in a white shirt Leeds had an ideal opportunity to put pressure on their promotion rivals.  Should be easy shouldn't it?

The first sign that this afternoon wasn't going to be the best was when I reached my seat and viewed the pitch.  Blades of grass were thin on the ground and even during the pre match warm up the ball was bobbling about like a cork in a bath.  Still it's the same for both sides I thought and they say the table doesn't lie.  The Blunts are in the relegation zone presumably because they are a shite team.  The game kicked off in bright sunshine with an annoyingly large number of empty seats to the right hand side of the Leeds fans.  Why hadn't we been given a bigger allocation when there were still lots of disappointed Leeds fans listening at home?  Maybe the powers that be knew something and were just trying to save more Leeds fans from disappointment?

The first 10 minutes were strewn with errors as both teams came to terms with the bumpy conditions.  Sheff Utd with ex Leeds player Doyle and Montgomery sat in midfield started the better.  Leeds looked lethargic.  Even the normally effervescent Mad Max seemed subdued.  Leeds normal passing game was stymied by the pitch and had no plan B.  Bannan was at least trying to get the ball moving from midfield with some neat touches but too many times the players in the yellow shirts were all too happy to hit a hopeful ball forward rather than risk controlling the ball on the dubious surface.  The usual adrenaline rush of watching the mighty whites was taking some time to kick in for this fan as the performance got poorer the longer the half progressed.  Yes Mad Max had a dribble and a shot and Snoddy screwed a shot wide but the more threatening chances were happening under our noses in Kasper's goal as the home side pressed for a goal.  I could feel a goal coming and wasn't for Leeds.  Bogdanovic should have opened the scoring as he was left unmarked in the box but a heroic save from our big Dane saved the day.  The ref blew the whistle on what I thought was our worst 45 minutes of the season.  Thankfully it was still 0.0 but my mood was anything but positive.  Apart from a couple of sweet touches from Bannan nobody on the Leeds team had had the confidence to put their foot on the ball and play. Consequently we had been dragged into and arm wrestle in midfield that we were losing badly.  Doyle and Montgomery were bossing things in the centre of the park.

Leeds started the 2nd period with a bit more purpose and forced an early corner that raised the hopes of the Leeds faithful but predictably it came to nothing.  The home fans up to now had been quiet, understandbly so given their position in the table and rather basic fare their team were producing.  That was about to change.  The ball broke down the Leeds left as our defence parted and a teasing ball was slid into the 6 yard box where Lichaj turned it into his own net as he tried vainly to clear.  1.0 to the Blunts and quite frankly they deserved it.  One down and we hadn't looked like scoring.  Not only that we been bullied and harrassed at every turn.  What we needed was a leader on the pitch.  What we got was too many hunched shoulders and lowered heads for my liking. 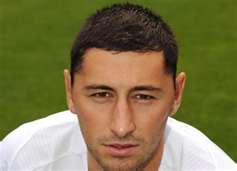 Lord Larry had changed the formation to 4.4.2 to try and inject some urgency into his pedestrian team with Mad Max joining a seriously under par Becchio up front.  Frustratingly the times we did get the ball down and attacked Sheffield's defence they looked as nervous and pourous as ours.  But those times were few and far between.  I sank into a deep depression watching a car crash of a match.  There was no inspiration or drive from the promotion hopefuls as a deathly silence fell on the usually noisy away following.  When it came the 2nd goal was no surprise.  Paynter had replaced Becchio to try and spark a revival but it was the Blunts sub Riise who bagged the killer goal as he waltzed through our vacant left back spot and calmly slotted home a simple shot. 2.0 game over with 15 minutes left.  Normally I am quite optimistic when watching Leeds but not this time.  My depression sank lower.  Somma came on and we went to 4.3.3.  Yes we had a scrambled chance that we should have scored but even at 2 down there were still too many heads lowered in the Leeds team for my liking.  "Come on Billy" got himself sent off for stamping on Lowry just to add to the day's woes.
The final whistle put us out of our misery.  This was a poor, poor Leeds performance.  We never came to terms with robust opponents who had a simple game plan but few skillful players.  This was definitely not promotion form.

The mood amongst the hordes of Leeds fans drifting away from the ground through the massed ranks of the South Yorks constabulary was black. Only Kasper and Bannan came away from the game with any credit. A popular adjective I heard at least 10 times as we walked to the car was shite.  I think that sums up the game from a Leeds point of view.  Worryingly we seem to have hit an end of season blip just at the wrong time.  We have been seriously under par for the last three games.  Is it nerves, or weariness or are we just not quite good enough.  By the way other promotion hopefuls are trying not to get promoted it would appear we are good enough?  So come on Lord Larry let's get the ship steadied and prove the gloating Blunts PA man wrong when he sent us home with a message of "see you all next year"

A week off due to international duty now.  Perhaps aswell after that performance.  The faltering Forest next up at the Theatre of Hope.  Let's hope we get back to winning ways.
Can't wait.
MOT

Posted by Andrew Butterwick at 17:16