Into the Lion's den.

It's that time of the year again.  Suddenly the sun is shining, the temperature is in the 20's and there is that unmistakable whiff of BBQ filling the late Friday evening air as the populous prepares for the weekend ahead. There's also a familiar whiff in the air on Planet Leeds......................that distinctive, aromatic, heady, drug like aura of the play offs is once again playing tunes on the nostrils of fans of the Mighty Whites.  So it is somehow appropriate that this weekend's game is against our friends from Bermondsey who seem to have been doggedly woven into the fabric of our play off experiences in recent years.  Last year that nerve jangling late Beckford goal against Bristol Rovers displaced the Lions from the 2nd automatic promotion spot whilst the previous year a late Abdou goal secured a play off semi final win at Elland Road for the boys in blue.  This year once again both teams are eyeing the possibility of promotion as all three of last year's promoted teams battle it out for back to back promotions into the promised land of the Premier League.  Looking at the table it couldn't be tighter.


A win for Millwall will bring them within touching distance of a top six spot but defeat would leave them with an awful lot to do over the final seven games and would extend the gap between them and Leeds to a gaping 10 points.  With Reading playing Forest and Swansea entertaining the high flying Canaries the permutations of what the table will look like by the time we are herded back through the metropolis by London Met's finest is anyone's guess. 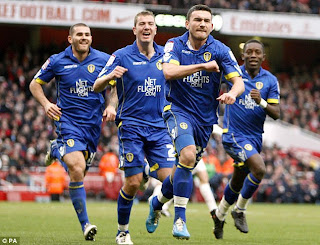 So can we turn round our disappointing record in the Lion's den?  The last time we tasted success in South Bermondsey was in April 2008 when goals from Jesus and Hughesey sent the play off final bound Leeds fans home happy.  Millwall are a good, well drilled team who do play attractive football and with a sell out crowd baying for Yorkshire blood they will be a difficult nut to crack.  Last time we took to the road ended in woeful failure at Bramall Lane but generally our form on the road has been good this season yielding only five defeats.  The only guarantee about the game is that it will be played in a thermo-nuclear hot atmosphere as the 2,000 Leeds fans attempt to make them selves heard in the sell out crowd.

Tips for the weekend?  Put your money on Dusty Carpet in the Grand National, it's never been beaten for 4 years......................and fasten that seat belt extra tight because this is going to be a cracking game.  Will Steve Morison terrorise the Leeds defence?  Will Mad Max and Snoddy rule the flanks? Can we keep a precious clean sheet and pinch three points.  Will Jake Livermore or Barry Bannan or both start for Leeds?  Can you smell the whiff of anticipation? Me too and the faithful crystal ball is showing a 2.1 win to Lord Larry's boys!
Can't wait.
MOT
Posted by Andrew Butterwick at 19:50