Elland Road was bathed in glorious sunshine as we made our way to the Capt's lounge for our pre match drinks.  The tension in the air around the stadium was noticeable as both sets of fans contemplated the significance of tonight's game.  Could Reading extend their 8 match winning run and at the same time guarantee at least a play off spot or could the mighty whites arrest their untimely run of poor form?  As the pre match pints were absorbed eagerly into the faithful Leeds fans bodies optimism started to replace pessimism in certain quarters, ie me!  The Happy Chocker and brother Chris were not so easily swayed.  They both feared the worst for Leeds in their Good Friday screen test.

Lord Larry again tweaked his team bringing Naylor back as captain at the expense of Bromby and as expected Paynter replaced the injured Becchio.  Connolly also returned as did Livermore in place of Killa.  Lord Larry usually has unswerving support from our motley crew but there were some puzzled frowns around me.  Naylor's return didn't exactly have fans whooping and hollering and the decision to leave Killa on the bench also puzzled a fair few hardened Leeds fans.  A rather meek "In Grayson we trust" was muttered as we took our seats. 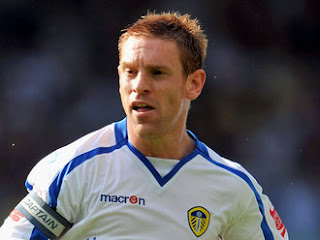 In recent weeks the pressure and nerves of the promotion chase have definitely inhibited Leeds' play and they have looked a shadow of the team that battled into the play off positions but straight from the kick off it was clear tonight was going to be different.  From 1 to 11 Leeds were eager and committed as they rocked Reading back in the first 10 minutes. Thankfully Leeds picked up some early momentum and that lifted the crowd.  Maybe the play off race isn't yet over I thought...............but just as I was beginning to feel ever so slightly comfortable Reading broke away and were it not for a typical save from Kasper we would have been one down.  You could almost touch the tension in the ground as both teams battled for control.  In Jake Livermore's case he was literally battling as he tested the referee's patience with some "robust" tackles.  Then Elland Road was on its feet.  Livermore stopped trying to kick anything in a Reading shirt for a minute and floated a lovely cross to the back post where Snoddy, of all people, rose to head a certain goal only to be thwarted by McCarthy's stunning save. The chance lifted the crowd and the team.  The atmosphere cranked up as MOT rang round LS11 and the team responded with extra verve and soon Mad Max pounced on the ball near the half way and was heading for the box..............he steadied himself and shoots................the goalie fumbles the save but the ball trickles just the wrong side of the post. Bollox!  Lady Luck had obviously decided to stay at home and wash her hair tonight?

Next Billy Paynter got the better of his man down the inside left channel and crossed the ball towards Howson who's header looped into the goalie's hands.  At the other end something strange was happening.  Our defence, ably led by Naylor, was looking solid and definitely "up for it"  Speaking of being "up for it" Livermore followed his booking with a scything tackle that in 99% of other games would have seen a 2nd yellow.  He was lucky to be still on the field.  Half time came.  A scrappy, tense first 45 minutes wasn't great for the neutral but Leeds had scored a moral victory in having the better chances whilst the Royals shaded possession.

The general opinion at the break was that this was a much better showing from Leeds and we were in fact making a very good Reading side look distinctly average.  Lord Larry decided Livermore was too much of a risk and replaced him with Killa for the 2nd 45 minutes.

The second half opened up from the start with both teams looking to gain the advantage.  Leeds were now attacking the kop and their passionate fans who were just hoping we could pinch a precious goal.  On the evidence of the first ten minutes of the half we wouldn't have long to wait as first Snoddy then Killa went near with chances that boosted the decibel level around Elland Road.  "We can do this" I suggested to HC.  The tension was almost unbearable as the sum total of all Leeds efforts for the season distilled down to this 45 minutes.  Killa's presence meant that Leeds were passing the ball more and both Mad Max and Snoddy started to come more and more into the game.  "We can definitely win this" I smiled at HC as my stomach knotted up and my throat had the consistency of the Gobi desert.  Each time the ball was moved forward by Reading I feared the worst but with the exception of one or two minor scares our new found confidence at the back shone through.  So all we had to do was score! 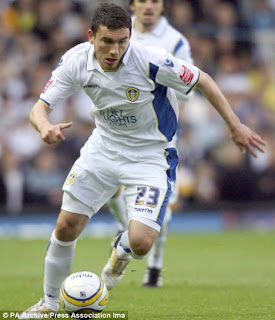 Bradders finished off a storming run from midfield by poking a shot that rebounded agonisingly off the bar.  Mad Max thundered a shot goalwards only for the star of the show, McCarthy, to yet again parry the ball away.  Leeds were taking control and were certainly creating the majority of the chances, but Lady Luck was still drying her hair! At the other end Griffin left Mad Max for dead and drilled a shot wide.  The game opened up as the clocked ticked past 70 minutes. This was now do or die for Leeds as they pushed on to try and find that illusive goal.  I could feel Billy Davies grinning at home. Come on Leeds let's wipe the smile off his pig like face!

Leeds, feeding on adrenaline and the crowd's passion, poured forward searching for a breakthough.  The ball found it's way out to the right and with the Reading defence in disarray Snoddy was left at the back post with a free header....................Gooooooooooooooooooal......................but no McCarthy once again saved the day for the Royals.  The Gobi desert was now the driest it's been for 150 years! We needed a goal to preserve our place in the play off spots.  Somma and Watt came on and immediately livened up proceedings as the clock ticked ominously towards 90 minutes.  It felt like our season was slipping through our hands.  One last effort was needed as added time showed 3 minutes.  The tension was now as taught as the taughtest drum ever made.  McCarthy came for a cross and fumbled.............it fell to Watt............who couldn't turn the ball into the empty net and out last chance fizzled away.  0.0 final score not something many people had predicted.

The fighting spirit the team showed tonight does give us still a chance to claim the last play off spot.  Yes we're on the same points as Forest with three games to go but still all to play for.  Naylor was the Leeds MOM for me in a good all round team performance. Becchio's finishing was missed tonight.  Hope he recovers soon.  So onto Palace on Monday. 3 points a must.  Another Cup Final me thinks.  Should be another tense one.
Can't wait.
MOT
Posted by Andrew Butterwick at 00:07