Jack's black book, Cantona and The Theatre of diminishing hope...

So can Lord Larry's boy's rescue something from the wreckage of this week with a win against Watford?  Even with 4 teams snapping at our heals desperate to prise the precious last play off spot from our grasp the fact is our destiny is still in our hands.  Frustrating and disappointing as the loss against the Rams was we are still somehow perched precariously in 6th spot with 5 excruciating games to go. Certainly the players have been quick to highlight in the press their belief that promotion is still on the agenda as Killa, Bradders and Jonny Howson have all struck a defiant note in the wake of Tuesday's capitulation to our old foes, Derby.  I will be among thousands of Leeds fans who are hoping they put their bodies and boots where their mouths are over the remaining games of this campaign.  I think we now need 4 wins just to claim a play off spot which on current form is a very tall order.  Funny how it's a very similar to the way we ended last season though when we appeared to have blown the automatic spot with a stumbling run in only to snatch it with that famous last day win over Bristol.  Could it be history repeating itself? 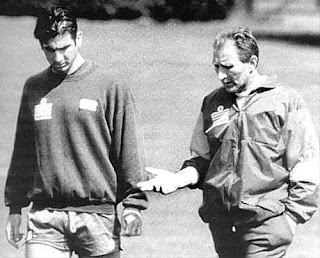 Two bits of news from ER caught my eye this week.  Plans are afoot to build a museum at Elland Road to celebrate the heritage of the club. I must admit it got me thinking as to which of the more quirky things might be on display amongst all the memorabilia from famous European nights and successful years of the past?  Maybe Jack Charlton's little black book of players he didn't send Xmas cards to?  Or maybe the minutes from the board meeting when they decided appointing Brian Clough as manager was a good idea? Or even Howard Wilkinson's notepad where he jotted down the pros and cons of selling a certain Mr Cantona to the Salford Yanks?  But I think the prize exhibit would have to be the picture of Lord Larry offering Sir Alex Rednose a bottle of Aldi's finest White wine to drown his sorrows after our famous FA Cup victory!

Also hot off the press from the Theatre of diminishing hope is the news that Leeds will no longer compete in a reserve league from next season preferring to arrange a series training ground friendlies instead.  Now I can understand the club wanting to be out of the Totesport.Com reserve league due to the weakness of the league but to not compete in any reserve league doesn't seem to make sense to me.  With a large squad, which Leeds have, surely they need regular good quality opposition for the fringe players to maintain their match sharpness?  There is a danger this decision is seen as a cost cutting measure rather one taken for good football reasons.

So when Saturday comes will the fading play off dream be back on or will Watford yet again destroy our play off hopes as they did last time we dallied with hopes of returning to the promised land?  It's time for heroes and strong hearts.  It's time for passion and fire in the bellies.  It's time for confidence and belief.  It's time to add another chapter to our heritage.  Over to you then Messr's Howson, Becchio, Kilkenny, Gradel, Schmeichel, O'Brien, Bromby, Lichaj, Connolly, Snoddgrass, Johnson, Bannan, Livermore, Somma.............who's brave enough to step up to the plate and guide us through these final games?  Let's put your playing where your mouths are and surprise us cynical and long suffering fans.  But please don't do it by half measures though.  I couldn't stand another play off final heartbreak.  Come on Leeds don't let me down.
Can't wait.
MOT
Posted by Andrew Butterwick at 22:48

I think the sidebeard`s of Mick Jones and the moustach of David Howard could be nice stuff for te ER museum...
Congrtulations for you Blog!
A Leeds fan from Argentina

Norwich just beat Forest so the pressure's off from that direction, at least unless Millwall beat Coventry tomorrow.

Matt,
Yes Canaries have done us a favour. We just need to take advantage now? Simples!