There is no easy way to get to Ipswich.  Last year we drove and it took an eternity so this year we let the train take the strain as we headed for the home of the Tractor boys for our latest contest in our Championship adventure.  Spirits were already high on the 11.45am from Peterboro to Ipswich as the draw for the 3rd round of the Carling cup drew near.  Now I am sure the Fens are very good for growing crops and looking as flat as a pancake but they are decidedly dodgy when it comes to receiving telephone or broadband signals on hand held devices.  So it was a frustrated carriage full of Leeds fans who were all trying their level best to get connected to listen to the draw but failing.  The clock ticked past the 12.30pm start of the draw and still nobody could get Twitter, Sky Go, Sky mobile or any other medium that could relay the vital information.................then one lad managed to get through on his phone. Simples!..............Leeds still hadn't been drawn out of the hat so we all crowded round...............then "Oooh we're at home".................. "to..........no you're winding me up........you sure? Fucking get in we've only got Man U".  The train erupted with delight.  Another cup tussle with our favourite team from over the Peninnes.  This time at home so it should easier!  Carling don't usually do perfect cup draws...............but they did this time. 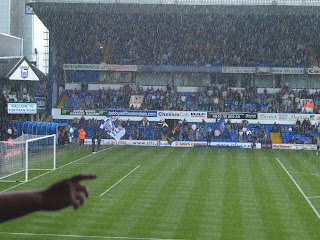 Leeds fans on an away day don't need any motivating when it comes to generating some noise but the juicy cup draw certainly added some spice to the proceedings at The Station Hotel as the packed pub discussed the forthcoming clash with the Salford Yanks.  The only problem we could see was thinking of a song that could rhyme with September 20th or 21st?  We got in the ground before a downpour of monsoon proportions  cascaded down from the Suffolk sky.  Lord Larry's team selection issues were almost forgotten with all the focus on the cup draw but he had decided to go with the same team as started at West Ham so the impressive Nunez was left on the bench. 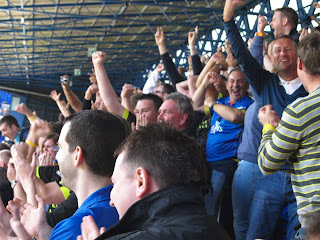 Leeds, playing in their "glow in the dark" away kit, started brightly as the home side's confidence still seemed to be haunted by their 7.1 mauling by the Posh the previous week.  Leeds' attacking machine hit the ground running as they crafted chances with ease in the first 20 minutes.  Lees coolly curled an exquisite ball round the back of the Ipswich defence to find the illusive Ross Mac who controlled the ball and tested Stockdale in the home goal with his shot.  Snoddy was next up with a jinking run finished off with a curling shot that just finished the wrong side of the bar.  Ross Mac rose to head a cross just wide and then Mad Max saw a stinging effort go just wide.  This was looking all too easy.  "We must score soon" I stated to the Happy Chocker who readily agreed. The attacks were relentless.  Stockdale somehow kept out a Ross Mac header showing just why Lord Larry was chasing his signature in the summer.  Surely we must score?  Next up was Kissy who headed a corner over the bar.  At the other end Lonergan was a virtual spectator.  Ipswich were there for the taking. 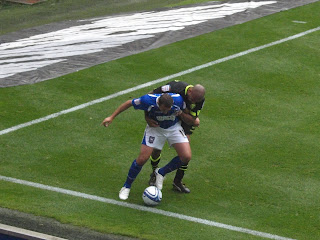 The goal when it came was the culmination of a sweeping move in which the ball moved crisply around before Snoddy found some space on the left..............he looked up and picked out an unmarked Ross Mac who headed easily past Stockdale. 1.0 Leeds.  The away fans exploded in a cacophony of noise.  With the memories of last week's annihilation fresh in their minds the home fans had the look of condemned men and women as they sat silently pondering just how bad this was going to get.  Despite Leeds continuing to attack at will and spread the ball from one flank to another the game headed for half time with only the one goal. Ipswich had hardly bothered Lonergan in the Leeds goal.  Things were looking good............no they were looking fantastic.  We had  followed up our heroic showing at Upton Park with 45 minutes of pure class and domination.  What could possibly go wrong now?  The smiling faces in the Leeds section of the crowd betrayed the fact that we all knew Leeds should have gone for their half time orange with at least a two goal lead if not more.  Still the second half should give us chance to improve our goal difference at the expense of a very nervy and ineffective home team? 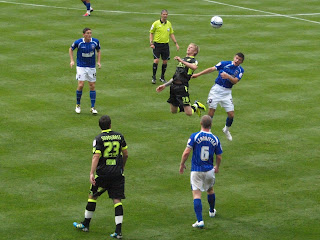 The second half was only 4 minutes old when Leeds suddenly pressed their well worn self destruct button. Leeds won a corner with an early attack as Ipswich rocked again waiting for the knock out blow.  Now we all know Leeds don't score from corners so why did they leave only two defenders marking two speedy Ipswich attackers?  As Ipswich inevitably cleared the corner they hoofed the ball down field.............Emmanuel Thomas chased the ball down and ran straight through Aidey White before tumbling to the ground.  Mr D'Urso clearly thought White had deliberately got himself trampled on which in his eyes is a straight red offence. Leeds down to ten men with far too many minutes left on the clock.  We do seem to be attracting a lot of red cards this year? The irony with D'Urso's decision was in the first half when Ipswich were desperately trying to stop the Leeds forward surges they brought down Gradel, Clayton, Ross Mac and Snoddy at will with only a solitary yellow card being flourished.  I have never understood and I never will the decision making process in the vast majority of referee's minds.

So another backs to the wall performance was needed.  Ross Mac came off for AOB and O'Dea moved to left back.  Hardly strengthening the back four?  Ipswich brought on Mr Money bags Bullard to take advantage of the extra space.  The whole complexion of the game changed in an instant.  The home crowd who had up to now  been as quiet as a very shy church mouse suddenly found their voice and the men in blue went up a gear and decided they could now attack the men in the dayglo away strip.  Lord Larry's choice of tactics didn't help as Leeds set two banks of four in front of Lonergan leaving Keogh well and truly isolated up front. The next 30 minutes went very slowly. Bullard sat deep revelling in the space and tried to orchestrate an Ipswich come back but his rustiness hampered his intentions.  Needless to say 1800 sets of fingernails were now disappearing at an alarming rate in the Leeds end as the clock started to go backwards and Leeds inexplicably hung on for dear life.  This was a classic match of two halves that would have had the likes of John Motson salivating with the opportunity to use well worn football cliches. 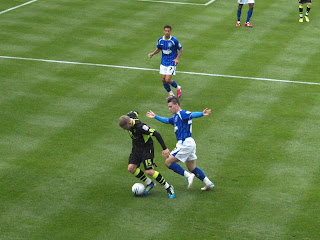 Just when Ipswich seemed to be running out of ideas and Leeds were growing in defensive confidence disaster struck.  Paul Jewell brought on Jason Scotland who any self respecting and long suffering Leeds fan will know always scores against Leeds.  Sure enough within 5 minutes he was given enough space on the edge of the box by a tiring defence to turn the QE2 round and fire an unstoppable shot past Lonergan into the corner of the net. 1.1.  It was Leeds who were now rocking but as the game ground towards 90 minutes Leeds seem to gain a last wind and push forward for the winner.  Keogh broke from midfield and bore down on the goal with Mad Max free on his left..............give it to him 1800 voices insisted...........Keogh hesitated though and then chose to try and shoot only for the chance to fizzle out as 1800 heads were held firmly in 1800 pairs of hands. Mad Max then chased a ball and won it inside the last third...............he then wriggled through two defenders as only he can only to be molested to the ground by the last Ipswich man inside the box..................surely even Mr D'Urso at no more than 10 yards away must give a penalty?  But no, he did the thing all ref's do when they get a decision badly wrong, run away quickly waving their arms about. Bastard!  The majority of Leeds fans were still pouring vile and damnation at Andy D'Urso when Keith Andrews hit a hopeful shot that ballooned off Clayton and excruciatingly slowly over the stranded Lonergan into the net to win the game for the Tractor boys.  To say I was gutted is like saying Sir Alex Rednose is slightly peeved with the FA over the way they treat his club over the selection of international players.

Five minutes added time give us hope but despite a mad scramble from a corner, like we were going to score from a corner, the final whistle went and somehow we had ended up with nil point.  Both the Happy Chocker and I were in the depths of a massive depression as we sort solace in the Station hotel before the long trip home.  How an earth had we lost that one?  Why is Andy D'Urso such a twat? Why hadn't we scored more goals in the first half? Should we have been more attack minded in the second half? and many more questions that flowed through our minds in silence after all you can't have a sensible debate when you're sulking!

At Ipswich station Ross Mac, Sam and O'Dea were boarding a London bound train as we waited for one North.  So the long trek home began.  The Ipswich fans on the train and in the station were impressed with Leeds but we had still lost.  4 hours later when I eventually got home I was still in the depths of a post match sulk brightened by the knowledge that once again Clayton, Snoddy and Gradel had shown their class.  Keogh had battled hard especially in the 2nd half.  Lonergan looks very solid between the sticks.  Overall things are looking good but we can't afford the number of cards we are currently shipping.  Adam Clayton has already harvested 4 yellows this season.  Not good.

The international break gives us a weekend off next week.  Suppose we can always dream of the Salford Yanks game?
Can't wait.
MOT

Posted by Andrew Butterwick at 09:18