Midweek matches are always difficult to get to but I wasn't expecting the mindless acts of thieves and vandals to hamper my plans to get to the Theatre of Hope to see our Carling Cup clash with Bradford............but they did!  Leaving work in Trafford at 5pm I was confronted with gridlock on the roads leading to the M62 as the Police locked down parts of Salford and the city centre.  "There'll be a bloody riot if I miss the kick off" I mused to myself as I crept agonisingly along at snails pace.  It did give me time to think about the forthcoming match though.  With 4 players away on international duty changes were inevitable.  Chances for Tom Lees, Nunez, Sam presumably? Would Larry stick with the 4.5.1 formation or put Billy Barndoor alongside Ross Mac up front? Will the defence gel together and keep a clean sheet? After all it might be a west Yorkshire derby but they are a League Two side?  The clock ticked onto 5.30pm, distance travelled 400 yards.  Will he go with AOB, who didn't look fit at Southampton, and Paddy at the back?  Will Ben Parker suddenly regain some sort of fitness and speed in the problematic left back spot.  Mmmm I think I knew the answer to that. 6pm, distance travelled 3/4 mile and now seriously pissed off.

The combination of thoughts of the frailties of the team and the gridlock had thoroughly depressed me by the time I reached the M62 at 6.30pm but luckily the usual congestion between Eccles and Rochdale had gone and I had a trouble free run to Elland Road.  Bradford City had turned out in force for their Cup Final as 4,000 away fans packed the South Stand hoping to put one over on their West Yorkshire neighbours.  Please note we are neighbours not rivals!  The team news confirmed Sam and Nunez on the flanks with AOB still at Centre half and Parker at LB.  The sight of only 6 subs on the bench and 2 of them, Taylor and Thompson, generating the question "anyone know much about them" just shows how threadbare the squad currently is.  The Happy Chocker and I settled into our seats slightly apprehensively ready for Kick off. 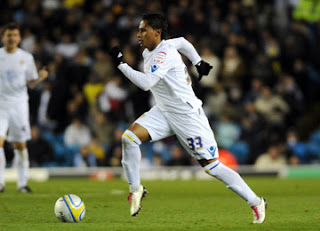 The early exchanges saw some juicy challenges from both sides.  Parker was soon left in a heap after a late tackle and Adam Clayton enhanced his growing reputation with a crunching dispossession of the Bradford left back, Threlfall. Leeds settled the better and carved out two good chances for Nunez one of which he should have buried.  Clayton was to the fore with some intelligent passing and vision that rocked City back on their heels.  A relaxed mood started to invade my apprehension as Leeds started to show some signs of the difference in class between the two sides..................but not in defence as hesitancy and silence seemed to be the buzz words in the back five.  AOB seemed to think he still played for Bradford as his lack of fitness seriously impaired his performance.  Bradford had sent some jitters around the kop on their forays into the Leeds half so it was no real surprise when they took the lead with a goal on the half hour.  The build up found Connolly out of position and when the ball was pulled back across the 6 yard box Parker's leisurely challenge allowed Compton to turn the ball into the net.  Will we ever keep a clean sheet again?

Leeds responded and to be fair continued to have the better of the game but with a double whammy of spurning what chances we created at one end and looking frighteningly fragile at the other my uber-optimism was fast disappearing for the 2nd game running.  Half time came with Leeds still 1.0 behind and my head stuck in my hands.  Surely Lord Larry would make changes at the back for the 2nd half.  Maybe Ethel the Tea lady could make her debut at centre half?

Leeds needed a lift and we didn't have to wait long as Sam caused havoc down the right and played the ball into the box.......... Clayton spun and laid it off for Nunez who whacked the ball into the top corner. 1.1.  This was better.  Soon the hard working Ross Mac was free and bearing down on goal but hooked his shot wide. But at the other end the porcelain fragility of the defence was once again exposed as AOB lost the ball and allowed Syers to race through and drill a shot wide.  Suddenly Bradford's attackers were looking world beaters heavily assisted by some farcical defending by the men in white. Connolly was all at sea at right back, AOB was having a very bad day at the office and Paddy was hurtling round try to stem the tide while Parker sauntered about like it was a Sunday morning kick about.  Leeds failure to find any sought of robust defence led to the inevitable goal from the visitors as AOB lost the ball and Threlfall slotted a simple ball to Flynn who lost the day dreaming Parker and fired an unstoppable shot past Lonergan. 2.1 Bradford.  The travelling fans were in dreamland.  Lord Larry was in orbit as he hooked AOB and Connolly to be replaced by Lees and Bromby.  The ironic cheering was cruel on AOB and he stormed off down the tunnel.  The changes worked though as a calm, serene style replaced the previous headless chicken impressions in the Leeds defence.

So with the leaking damn fixed by the substitutions Leeds set about winning the game attacking with verve driven by Clayton and Howson with the ever eager Nunez, Sam and Ross Mac chomping at the bit looking for the all important equaliser.  Michael Brown was somewhere on the pitch but seemed to have an invisible shirt on.  With Tom Lees playing with confidence way beyond his young years the right hand flank was battering the faltering City defences and when Lees popped up to deliver a delicious cross Ross Mac greedily accepted the opportunity with a perfect header.  2.2 and Bradford were wobbling.

Leeds were soon in front as the white tidal wave engulfed the battling Bradfordians.  Sam and Lees again made hay down the right and a teasing cross took a deflection before Nunez hammered home from a yard out.  3.2 to Leeds and relief swept round three sides of the stadium like a quick acting Alka Selzer. Bradford tired quickly as Leeds played keep ball and  5 minutes injury time wasn't enough for Bradford to equalise as Leeds ran out winners and earned their place in the next round.

Good performances from the front three of Sam, Nunez and Ross Mac ably assisted by the impressive Clayton went some way to mask the woeful defensive efforts of Connolly, AOB and Parker.  Tom Lees must start against Boro.  The lack of strengthening of the back four is already threatening our start to the season.  Elsewhere Clayton and Nunez look to me to have brought improvement to their positions over last season's incumbents.  Jury is out on Michael Brown.  Seemed very anonymous tonight.  A win is a win though and the potential banana skin eventually avoided after a couple of dodgy moments.

Saturday should see the return of Snoddy, Max and O'Dea.  Team selection could be interesting though?  Lees, Bromby and O'Dea to start?  What about Nunez in for Snoddy? Maybe not but Snoddy needs to improve from his less than saintly performance last week..........................and you never know we might even sign somebody before Saturday?  Not holding my breath though!

Bring on Middlesboro.  A difficult game me thinks.  I think we will need 3 goals to get a result which is certainly possible.  Dare we hope for a clean sheet?  We can hope but until we start marking tighter, tackling better and communicating along the back four it's not going to happen.

Strengthen you seat belts two Yorkshire derby's back to back coming down the track.
Can't wait.
MOT.


Posted by Andrew Butterwick at 23:59