An early morning start was the order of the day for the latest trip to watch the mighty whites.  With Frank, the Happy Chocker and the Quiet One on board the Scirocco was soon heading south full of the usual match day mixture of apprehension and anticipation. The question of would Gradel and Howson both return to the team was debated long and hard until we hit the M25.  Our final conclusion was they would but it would be harsh on Nunez.  With the car deposited in Upminster station car park we took the tube to Upton Park along with Dale, Beady & Luke and we were soon tumbling out into Green Street for the last leg to the ground.  For all the talk of  West Ham being one of the more intimidating away grounds to visit the atmosphere on the approach to the ground was more akin to a Sunday morning stroll................well it was Sunday morning and we were strolling! 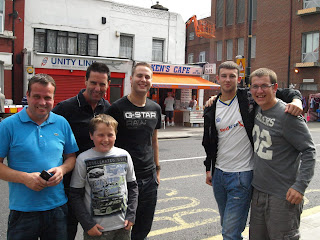 Near to the ground we found the latest of Capt Birdseye's business acquisitions in the form of a Pie n Mash cafe and I couldn't resist getting a snap for posterity.  Wonder if he's putting a bid in for West Ham?

Once in the ground news that Brown was injured muted any further debate about which system we would be playing and the expected return of Mad Max and Howson meant no room for Nunez.  With the hot London sun beating down the game got under way with Leeds employing the 4.4.2 formation that served them so well against Hull.  The 3,000 travelling fans cranked up the atmosphere as usual and the Leeds anthem was soon ringing round Upton Park.  But it was West Ham, playing to a game plan forged in the Academy of Big Sam, who started the better with Lonergan twice saving smartly from headers as the Hammers tested our newly confident back four.  But it was third time lucky for the Hammers as Carlton Cole evaded young Lees' attempts to mark him at a corner and bundled the ball into the net.  6 minutes gone and we were one down.  Mmmm this was a knock to the confidence.  Big Sam has assembled a big side and they were playing to their strengths.  The marking at the corners was not what you'd call effective.

Leeds recovered well from the early setback though and soon Clayton, Howson and Gradel were all testing the resolve of the home defence with probing runs.  Mad Max showed exactly why Lord Larry thinks he is worth £10m as he ripped into the unfortunate home right back time after time.  Quite honestly I think he's a snip at that price in today's market?  West Ham's defence had a look of uncertainty about as Leeds' fluid movement unlocked space on a cramped pitch, speaking of which the width of the pitch looked to have been severely reduced.  Was this Big Sam's tactic to stop Snoddy and Mad Max running riot down the flanks? 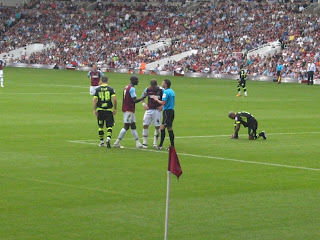 The two sets of fans were exchanging some relatively good natured banter.  "You only sing when you're looting" & "You're a shit Emile Heskey" (aimed at the hapless Cole) brought wry smiles from the West Ham faithful.  A Frank Bruno lookalike in the adjacent stand to the Leeds hordes attracted their attention and soon a chant of "there's only one Frank Bruno" drifted into the East End sky.  That must have confused the fans watching on the telly?

Back on the pitch things were beginning to turn Leeds way.  Snoddy rattled the bar with a rasping volley and Adam Clayton continued to get the better of the much hyped Scott Parker in the crucial midfield battle.  Wonder what the watching Mr Cappello was making of it?  Two of his England "stars", Cole and Parker, were not even the best players in their position on the pitch never mind in our green and pleasant land.  Both Lees and White were looking good down each flank constantly probing and supporting Mad Max and Snoddy.  We might have been one nil down but there were smiles on the faces of the Leeds fans as their heroes began to dominate the game.  As the game moved towards half time the Leeds pressure told as we were awarded a penalty for handball, not that we could see it from the distance we were from the play.  Gradel stepped up to bring the two sides level................and then made his first mistake of the afternoon by dragging his shot wide. Bollox!  The home fans celebrated as if they'd scored themselves.  Maybe it just wasn't going to be our day?

It so nearly got a lot worse for Leeds as White brought down Cole in the box after he had some how escaped Kissy's clutches.  A lot of ref's would have given a penalty for that but Cole's prolonged tantrum brought another chorus of "You're just a shit Emile Heskey"  from the unforgiving Leeds fans.  This only spurred Leeds on and Mad Max in particular as he tested the home goalie with a stinging drive shortly followed by a deep cross that Green just tipped over the bar.  The old adage that Leeds never score from corners was unlikely to be broken with Tomkins dominating any aerial battles in both boxes.  Half time came and despite the fact that Leeds were 1.0 down they received a generous ovation from the travelling army of whites fans.

As with the first half the Hammers started the second on the front foot.  A dangerous cross thankfully went straight to the shit Emile Heskey who headed well wide.  When Leeds did attack they were denied a stonewall penalty as Scott Parker persuaded the ref that he had taken the ball when he actually scythed down Aidey White in the box like a combined harvester fells a field of wheat at harvest time.  Although we were increasing the pressure the game was tense.  The next goal would be crucial and as the game flowed from one end to the other Leeds gradually took control. Ross Mac tried to screw a shot in but appeared to be pulled down.  Then the West Ham resistance finally fell.  Snoddy chested down a cross field ball past his full back and exchanged a sweet one two with the hard working Keogh in the box........................he shaped to shoot but as a desperate Hammers block hurtled in he calmly slid the ball back to Ross Mac on the penalty spot who smashed the ball home...................Gooooooooooooooooooooooooal Leeds and the lower tier of the Sir Trevor Brooking stand exploded with ecstatic Leeds fans.  A thoroughly well deserved equaliser.  "Bruno, Bruno, what's the score?" chanted the Leeds morons and Big Frank responded with a finger up on each hand..........classic!

Now all football experts will tell you that a team is at it's most vulnerable immediately after they score.  Just to prove that point Leeds were only level for 90 seconds as Kissy fired in a thumping own goal whilst trying to clear a West Ham cross.  Frank Bruno danced with delight thrusting 2 fingers on one hand and 1 on the other towards the away support.

Leeds battled on looking for a 2nd equaliser but were visibly tiring.  The giant Jon Carew came off the bench to replace Carlton Cole adding further height to the home side.  "You're just a shit Carlton Cole" was the warm welcome he got from the Leeds fans.  Nunez replaced Ross Mac on 67 minutes as Lord Larry tried to inject some fresh legs ready for the final assault on Rob Green's goal.  The Honduran soon made his presence felt as he smacked a goal bound shot that Green punched away but the minutes started to tick ominously to 90 minutes and Leeds were still one goal down.  Surely we deserve something from such an impressive display? 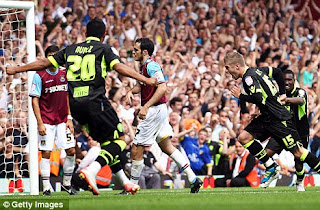 People often ask me why do I bother going to watch Leeds all over the country especially when the games is on the TV.  The answer is quite simple....................moments like the finish to this game. With the game slipping away from the mighty whites Leeds crafted one last carefully constructed attack working the ball neatly forward..................a clever ball was slipped out to Tom Lees on the right who slung in a fabulous cross..............................the ball was flicked onto Capt Fantastic at the far post who coolly set his sights and curled a delicious shot that rattled both post and bar......................get in, no...............but in a blink of an eye Adam Clayton arrived majestically to ram home the ball past Green's flailing arms and send the 3,000 Leeds fanatics into raptures, me included, and the home fans into the depths of despair.  Absolutely mint!  Clayton was submerged in wildly celebrating fans and all was right with the world.  Frank Bruno was not amused. Leeds even had time to try and pinch the winner from a final corner.  But we don't score from corners and it ended 2:2.

The smiles on the departing Leeds fan's faces told it's own story.  Leeds had burst West Ham's bubble right at the death and were definitely Marching on Together.  Green Street was soon awash with a mixture of beaming Yorkshire folk and glum Eastenders.  Emmerdale had won a moral victory in this battle of the soaps!  The journey home was swift fueled by memories of not one but two comebacks by Leeds.  Adam Clayton was very impressive today as was the whole team.  I was especially pleased for the two young full backs who have made those positions their own in just a couple of matches. Things are looking bright for Leeds.  Maybe, just maybe the players that Lord Larry has brought in have strengthened the team from last year?  Anyone want Schmeichel, Killa and Bradders back? Nope I didn't think so. Just hope nobody offers £10m for Mad Max before the window closes.

In 1971 a clash between Leeds and West Ham at Upton Park was televised on the Big Match and went a long way to cementing the Southern view that Leeds were a dirty team who would win at all costs as they lost a two goal lead and then recovered to win 3.2 against the media darlings from Upton Park.  Today's televised game won't have convinced any of the "we all hate Leeds scum" brigade to change their view on Leeds but I suspect Leeds have won a lot of new friends with that performance and more to the point the style in which they played.............Even Robbie Savage was impressed on 606........but I think he's a secret Leeds fan anyway!.

Donny Rovers in the League Cup on Tuesday and an opportunity to progress to more juicy ties later in the competition.  If we carry on from where we left off at Upton Park we should be too strong for the injury ravaged South Yorkshiremen. Dont loosen your seat belts though.  This is Leeds United and we don't do easy.
Can't wait!
MOT

Posted by Andrew Butterwick at 22:55

since Leeds is the 3rd best city in UK to find single women from 35 to 64 years old, i think we could organize a nice holiday for all football players :-) lol.

(btw here's the study for single women in Europe i was referring http://travel.excite.co.uk/singles-travel-map-europe-N31380.html ) ceers ;)