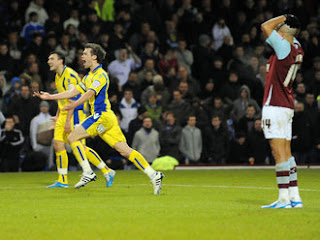 Leeds return to action after the international break with a trip to Burnley for a Saturday lunchtime battle of the Roses at the wonderfully traditional football ground Turf Moor. On our last visit we witnessed one of the games of last season as over 4,000 mighty white's fanatics roared their team back from the dead to win 3.2 with a famous Jonny Howson winner 5 minutes from time sending the Leeds faithful into ecstasy.  Even writing about it makes the hairs on the back of my neck stand up. It was one of those games that was an absolute pleasure to be there.  Victory that day pushed Leeds to the dizzy heights of 4th in the table and when we beat high flying QPR the following week we were in 2nd and a precious automatic promotion spot. This season we find ourselves in a similar position placed 7th but just 6 points off 2nd spot as a whole bevy of clubs jostle for a play off position to take into the new year.

So have Leeds got what it takes to mount a promotion challenge in the new year?  Certainly on the evidence of the Rachubka inspired five goal embarrassment against Blackpool the answer is a resounding no but with the hastily recruited McCarthy between the sticks against Leicester suddenly we looked contenders again.  Admittedly the shot shy Foxes didn't exactly pepper him with shots but what he had to deal with he did competently and instilled some much needed confidence into the back four and their long suffering fans.  With Lonergan apparently sidelined until at least Xmas I will be hoping the Reading back up goalie has an enjoyable and fruitful stay with the mighty whites.................Just hope Mr Federici doesn't get injured and our potential saviour has to fly back down the M1 to rescue Reading.  If we can get through the Lonerganless games without too much collateral damage we should be reasonably placed come the new year for another shot at aiming for that tantalising dream of challenging for promotion..................but then again there's another 12 clubs who have currently got the same dream...............should make for another "interesting" end to the season?

So in a strange week when Sepp Blatter once again showed his unique lack of understanding of Football in the 21st century, England somehow beat the reigning World Champions, Spain, and Carlos Tevez pissed off the ever forgiving chief of the PFA, Gordon Taylor, it's good to know that on Saturday there's a good old fashioned proper game between two teams who have a rich seam of unpredictability running right through the middle of them.  Should make for a cracking atmosphere and a cracking game.......and guess what?
Can't wait!
MOT
Posted by Andrew Butterwick at 20:20