Selby station was buzzing with excitement as the Happy Chocker, Quiet One and yours truly gathered for the short trip into Leeds.  As ever the wasps nest in the footbridge was still defying winter's chilly blast and the sign on platform two was squeaking reassuringly as the wind whistled through the eclectic mix of footy fans, the inevitable hen party and Xmas shoppers.  HC was nervous as our recent record against the South Yorkshire Whippet lovers is not good as plenty of his work colleagues had reminded him during the build up to this game. Surely today was the day to bury that particular jinx just as we have beaten the Tuesday night jinx this term by beating the likes of Bradford, Hull and Donny on that fateful day?  The howling wind and persistent rain set against a slate grey sky somehow seemed appropriate for this Yorkshire derby.  Leeds v Barnsley is not and has never been an El Classico derby.  If ever there was a derby that was hewn out of Yorkshire millstone grit and coal this is it. 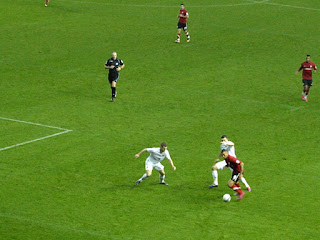 The team news was a surprise to me as Becchio and Sam were in the starting XI with Keogh, Pugh and Maik Taylor warming the bench.  Much as I love Becchio on present form Keogh is the better all round performer for me. Sorry Seona! Sam's encouraging show at Burnley had clearly been enough to earn him a start. Buoyed by some of the amber nectar our optimistic group were all predicting a 3.1 win for the mighty whites.  Then the game kicked off.

Leeds had the better of the opening 15 minutes without really testing the Barnsley keeper.  Snoddy cut inside but shot high wide and handsome.  White scuttled down the left flank and exchanged passes on the edge of the box but before he could shoot he went sprawling to the ground. PENALTY! roared the Leeds fans but the ref, Mr Salisbury, reached for his pocket and produced a yellow for White presumably for diving.  "I'd love to see that again" I complained to HC. When Barnsley had the ball the young Butterfield was exhibiting all the class that has attracted attention from numerous Premier League outfits as he danced his way past desperate Leeds tackles with assured calm.  Messr's Clayton and Howson didn't compare well to this midfield maestro.  Good job the rest of the Barsnley team weren't that good I pondered.  The conditions weren't exactly helping the quality of the Yorkshire millstone grit derby as the rain and wind continued to swirl around the famous old stadium. 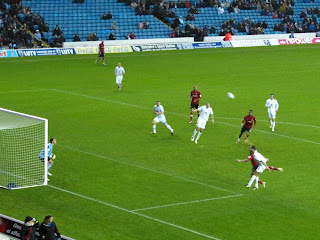 The first goal came out of the blue as Barnsley took a quick throw in on the right that released Jim O'Brien, aided by his marker slipping on the wet turf, he took the ball into the box and squared it back for Vaz Te who made a complete hash of the shot only for his "shinned" shot to bounce into the turf and loop over McCarthy and into the net.  Bolllox!  HC's face turned as white as driven snow as the first of numerous texts arrived from his gloating work colleagues.  Vaz Te celebrated the goal in front of the kop as if he'd just hit a 30 yard screamer when he should have been walking away embarrassed and blushing for claiming a goal with such a poor shot.  The goal knocked the stuffing out of a mis-firing Leeds team and Barnsley started to take charge of what was a very scrappy game.  The away fans were loving it though despite the efforts of the "standing up" gestapo to keep them all sat down in the West stand.

Leeds needed to get back in the game quickly and nearly did as both Kissy and Tom Lees had shots blocked after a dangerous corner.  But Leeds were not giving any inspiration to the home fans and the spectre of another Yorkshire derby disappointment was looming large.  On 41 minutes it became a step nearer.  Jacob Butterfield has earned a glowing reputation as possessing one of the best long range shots in the division so when he picked the ball up some 35 yards out and straightened up to home in on goal I was screaming "close the bastard down" but my prophetic shouts fell on deaf ears as he hit an exocet style shot that moved viciously in the air.  McCarthy got to the ball but could only parry the ball, Rachubka like, to Davies who tapped the ball home to give Barnsley a 2 goal lead.  HC was immediately on the phone to his boss pleading for a week's emergency holiday as yet more gloating texts appeared from his Barnsley supporting work mates.  Leeds hadn't played well but didn't really deserve to be 2 goals down. The danger now was it could turn into another "Blackpool"?  Snoddy nearly got one back as he screwed a shot just over but the half time whistle went to bring a calamitous 45 minutes to an end for Leeds.

The Gents debate with the urinal philosophers was laced with frustration and anger.  "Two nil to the f****** referee" one slightly biased fan commented whilst another somehow thought Snoddy was to blame for the ineptitude of the first half?  "Grayson hasn't a f****** clue" and the inevitable "we were shite" were other contributions to a lively debate as the boil of another poor first half performance was lanced by some of Leeds' harshest critics............their own fans! 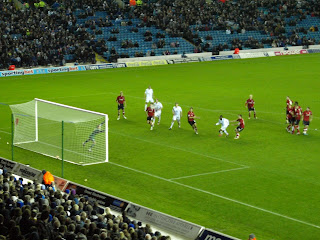 Leeds definitely needed to score the next goal if they were to have any chance of rescuing anything from the game and the much maligned Snoddy so nearly brought the house down with a curling shot that beat the goalie but rebounded agonisingly off the wrong side of the post.  This lifted the crowd and Leeds pressed Barnsley much better than they did in the opening 45 minutes as the tempo of the game went up a notch.  Too many times though Leeds were happy to use the long ball to the forwards where  more often than not play broke down.  Becchio had been largely anonymous all game but on 54 minutes he was instrumental in engineering a free kick for Leeds as he was bundled off the ball 25 yards out.  The free kick was the perfect distance for Ross Mac and he didn't disappoint as struck a sweet shot past the despairing Steele in front of the kop. 1.2 to Barnsley and hope for Leeds and HC's sanity at work this next week?

Barnsley manned the ramparts ready for a Leeds assault in search of an equaliser.  Nunez replaced Sam just after the goal to give Leeds more impetus but Lord Larry's weapon of choice still appeared to be the long hopeful ball which had all the effect of a Pea shooter on the tank like defence of Barnsley.  Keogh replaced Becchio with 15 minutes to go and then bizarrely Pugh swapped with Ross Mac?  Why take a goal scorer off when we still needed a goal?  Leeds huffed and puffed but struggled to make any impact as Barnsley continued to look dangerous on the break as time and again they broke straight through the middle of our paper thin centre midfield.  McCarthy made two or three vital saves to keep Leeds in with a chance but as the game entered the final 10 minutes I was fearing the worst rather than expecting an equaliser.  Keogh turned Perkins and headed for goal before the Barnsley man cynically brought him down earning Perkins his 2nd yellow and an early bath.  So Leeds had a free kick on the edge of the box with barely 3 minutes to go.  So where was our free kick expert Ross Mac?  Oh that's right he was getting an early bath after being subbed.  So it was left to Snoddy to try his luck but his speculative shot cannoned off the wall for a corner.  Leeds didn't stop fighting and Nunez should have equalised deep into added time it was too little too late as the whistle blew to signal a Barnsley win and a nightmare week for HC at work.

The mood of the Leeds fans as they streamed away into the West Yorkshire night was one of disgruntled deja vu.  Once again our inconsistency had let us down.  Remarkably we are still 5th in the table after results went our way elsewhere but that is little comfort when the weaknesses and flaws in Lord Larry's squad have just been once again alarmingly exposed.  The midfield pairing of Clayton and Howson were overshadowed by Butterfield the entire game.  Becchio looked completely off the pace and sometimes even disinterested but most of all the team's tendency to revert to the hopeful long ball punt is the most worrying aspect of this defeat.  Not a good day at the office for the mighty whites.

Tuesday brings the visit to Notts Forest and Saturday the visit of our friends from South Bermondsey to the Theatre of Hope.  By the sound of the drama queens and doomsday fans on the phone ins and in cyber space after the match you would think we'd just been relegated not still in the play off spots.  Strengthening of the squad in January is a must if we are to challenge for promotion.  The next two months will be testing times for Lord Larry.  If he gets his recruitment right we should have enough fire power to challenge for promotion.  If not the drama queens will get their wish and we could be looking for another leader in the new year.  Life's never boring following Leeds is it?  Roll on Tuesday and another rollercoaster game.
Can't wait.
MOT
Posted by Andrew Butterwick at 18:51

Great write-up, mate. I was at the game, too. Respect.