Leeds face a blank weekend as the 4th round of the FA Cup bursts into action without the mighty whites.  There's still been plenty happening around the world of football and specifically on Planet Leeds this week though.  The Transfer Window Express is hurtling towards the terminus at breakneck speed.  Up to now only Danny Pugh and Robbie Rogers have alighted at Leeds station with a full price ticket accompanied by Mr Delph and Mr Townsend clutching special offer free tickets.  Maik Taylor also ended up at Leeds after working a free passage using his Senior railcard. Leeds captain, Jonny Howson, has controversially  boarded an outbound train to Norwich whilst reported sightings of Snoddy lurking near the outbound platform continue to worry the Leeds faithful. Not surprisingly Ben Parker got a one way ticket to ride to Carlisle after his outburst in the members bar in defence of his mate, Mr Howson, last Saturday.

Of more concern is the sight of Lord Larry struggling to buy any tickets at the platform ticket machine. His recent attempts to buy decent tickets have failed miserably with Larry usually bemoaning the fact that certain trains were cancelled on the last day of the journey or the train got unexpectedly diverted elsewhere to much bigger stations, such as Queens Park Rangers, at the last minute. In the background is The Gormless Controller, Mr Harvey, who has a nasty habit of derailing the few trains on their way into Leeds with his inflexible and rigid points that he refuses to keep maintained.  Of course the Leeds Railway Baron, Kenneth the Asset Stripper, has still got a firm hand on the purse strings and is reported to be furious that he is £2m down on ticket sales this year.  So look out for more departures over the next few days rather than anyone of note stepping onto the Leeds platform.................breaking travel news, expect severe delays and cancellations for trains heading to Leeds until Wednesday when Larry and Kenneth the Asset Stripper will re-issue the well used press statement detailing "Experienced Premier League players who Leeds so nearly signed"  Leaves on the line, wrong type of snow, agents demanding too much or protesting moronic fans frightening players away will be the most likely reasons! 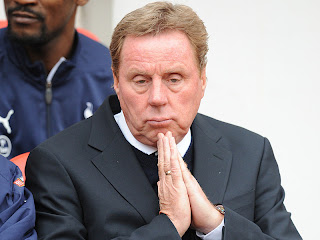 Harry Redknapp's trials and tribulations in court facing a charge of alleged tax evasion caught my eye this week. He is charged along with Milan Mandaric in relation to a bonus, ie bung, of £180k he "earned" for selling Peter "Rodders" Crouch to Aston Villa.  The dubious bonus was deposited in a bank in Monaco, where all the upstanding and good eggs of Football have bank accounts or houses.  As ever with 'Arry he has always got some good quotes to keep us amused so we have learnt this week that he struggles to read and write, opened the account in the name of his dog and also lost significant sums of money in property deals.  The one point that none of the press seem to have honed in on though is the reason for the bonus?  Is it custom and practice for managers to get bonuses for selling players?  In my naive world I imagined they might get bonuses for more mundane things like winning trophies or avoiding relegation not buying and selling players?  I suppose it's another example of how surreal the world of Football finance is as highlighted by certain players earning so much money that they literally give it away to complete strangers whilst dyed in the wool clubs such as Darlington go to the wall for the sake of debts that equate to half a weeks wages for a Premier League player.

Finally I couldn't post without mentioning Phil Dowd's outstandingly poor performance in the midweek League Cup Semi Final.  Admittedly he is not my favourite referee.  It's something to do with that permanent "I'm always right" smirk he has on his face throughout the game but his continuous gesticulating to the Cetihad players after he had given what clearly was not a penalty was a classic. You'd have thought that the fact that even the most placid Cetihad player were still complaining as the teams went off for half time might have planted a seed of doubt in his mind but no Mr Dowd continued to dramatically demonstrate how to stretch his arms whilst pulling a wide eyed facial stare in imitation of what he thought he saw.  What a twat!

Birmingham up next on Tuesday.  Three points would be nice against an improving Brum side.  Wonder if Larry can sought the ticket machine out before then?
Can't wait.
MOT
Posted by Andrew Butterwick at 12:48