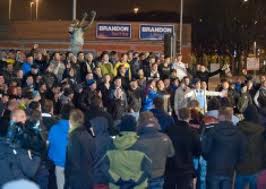 I know supporting Leeds United is more often than not a tad difficult but even by their penchant for making life difficult for their fans this week has got to down as one of the most frustrating and maddening ever.  Yes we all knew the transfer window was flapping open and all the usual rumours were doing the rounds, Snoddy's going, Smith's coming, Grayson's going, Warnock's coming and other snippets of newspaper and cyberspace talk wafted around Planet Leeds.  But with Capt Birdseye publicly stating he expects Lord Larry to lead Leeds to promotion this season there was a slim hope in some quaters that the club just might see the chance to strengthen the team and close the wafer thin gap between themselves and the promotion hunting pack as an opportunity too good to miss.  Despite the fact that any Leeds player who's attracted a whiff of interest from other clubs have exited the door at the Theatre of Hope quicker than you can say "We're not a selling club" surely this season was going to prove the exception to the rule.  After all we're reported to be financially stable, debt free and as a result "don't need to sell players"  So the January transfer window is the ideal time to invest in the one or two players that everybody, Lord Larry and Capt Birdseye included, believe we need to bolster our promotion push.

This is where logic goes out of the window though.  As we all know there is no air on the Moon and there is no logic on Planet Leeds. So when news started to break on Wednesday that Leeds had "reluctantly" accepted an offer from our carrot crunching friends in deepest Norfolk for Mr Howson's signature the majority of the LUFC family were incredulous.  The old excuse of "his contract's up in 6 months and he can walk free" was regurgitated from the bowels of the Leeds cess pit.  Not if you offer him a reasonable contract he won't!  "He wants to play Premier League football" the Leeds website lamely suggested as justification for accepting the offer.  Of course he wants to play fucking Premier League football and so should every other Leeds player.......but with Leeds United not some canary coloured plaything of Delia Smith's.  That's called ambition something that is not in the vocabulary of anyone from Grayson upwards at Elland Road.  The most damning statement coming out of the Theatre of no ambition was from the lips of Simon Grayson himself. "He wants to play Premier League football.  He wants to do that here........we can't guarantee that"  No wonder Jonny decided to up sticks and move if that's the sort of motivation he gets from his boss.  So not only has Grayson confirmed to his club captain that he doesn't think we will get promoted but also to the rest of the team and other clubs looking for bargains in the January sales.  Ross Mac, Tom Lees, Snoddy, Aidey White, Clayton and even Becchio will have agents round them like bees round a honey pot.  There's another fire sale at Elland Road.  Get there quick though the sale ends on Sunday at 5pm!

Of course selling players isn't that big a deal if it's part of a genuine team strengthening strategy but when the only players coming the other way are either completely unknown American imports, washed out has beens at the end of their career or loan players who will not even stay until the end of the season then there should be no surprise that the Leeds fans are revolting.  "Sell the club, not the team" could become our anthem? 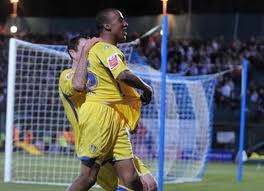 So where do we go from here?  Yes Fabian Delph has returned to the club on a short term loan and that can only be good but that still leaves us woefully short in midfield and that assumes that no more family silver will disappear out of the door.  Can you really see Snoddy remaining at Leeds when clubs know they only need flash some cash under Capt Birdseye's nose and he'll be gone?  These are dark days for Leeds as once again the rest of the football world take great pleasure in laughing at our misfortune.  Protests will be made.  I've resigned from the Yorkshire Radio fans panel in protest but that's just a small gesture.  If the whole of the panel walked out the rhino skinned Bates wouldn't bat an eye lid.  If we boycott a game he won't bat an eye lid.  He will just continue slagging off his players, fans and anyone else who dares to disagree with him.  His programme notes no doubt will crucify Howson and all the proud, moronic protesters.  The man is a bully plain and simple.  One thing that is needed though is for the fans that do remain get behind the team during the matches.

This has been a sad week.  I am used to the difficulties in supporting Leeds and have defended Bates' running of the club in the past but enough is enough.  A procession of players have left the club over the past 4 years with virtually no like for like replacements never mind better replacements coming into Elland Road.  I genuinely worry what's round the corner for Leeds unless Bates does the decent thing and sells the club. We all know he's not going to do that though.  So while I think of a practical way to get Bates on a one way ticket to Monaco we've got a game against Ipswich to look forward to.  Surprisingly despite all my frustration.........................
Can't wait.
MOT
Posted by Andrew Butterwick at 22:18

Whilst agrreing with all you say and in particular the fact that KB does not care what we do there is one thing that does get to him.
That is bad publicy in the papers. His reaction to the YEP is there for all to see. It would be great if the Nationals would get involved as well.
How the FL have allowed him to get away with all the underhand schemes to control Leeds is beyond me.

Anon,
You make a good point about his dislike of national media publicity. just need to know which buttons to press to get that publicity.
MOT