Will Mrs Doubtfire save Leeds Utd?

At the end of the most depressing weeks on Planet Leeds for some time Neil Warnock, aka Colin Wanker (anagram), has emerged as the heir apparent to Simon Grayson's throne.  His trip over to Monaco for his interview with Capt Birdseye was well reported and although it flies in the face of the "we do all our negotiating and deals in secret" bollox that LUFC usually claim it would seem that the deal is done and will probably be announced not long after the final whistle of today's game against Donny. 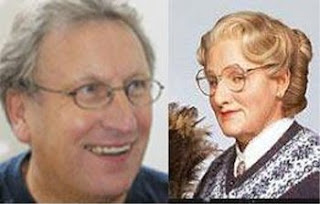 If Colin does get the job he will not be the most popular manager ever to arrive at the Theatre of No Ambition but we desperately need someone to steady the ship and he has got a good record of getting teams promoted, especially out of the Championship.  He is very passionate about the game and does wear his heart on his sleeve so I've a sneaking feeling that it wouldn't take long for him to win the hearts and minds of the LUFC family once the performances on the pitch start to improve. The challenge to his inflamed ego of turning round a club such as Leeds will override his natural aversion to the West Yorkshire club borne out of his formative years living in Sheffield.  So if he is given the poison chalice that is the Leeds manager's job I for one will be fully supportive of the appointment.  Leeds urgently need some nous, passion and sheer bloody mindedness back in the dressing room if we are to build a team capable of challenging for promotion next season and Colin fits the bill for me.  His uncanny resemblance to a certain Mrs Doubtfire is also a good omen.  After all Robin Williams' character pretended to be someone else to get what he wanted, his wife back just as Colin will pretend he likes Leeds to get them promoted out of the championship and add another positive notch to his CV!

Doncaster arrive at Leeds in almost as much turmoil as the mighty whites.  Their chairman, John Ryan, has overseen a significant decline in fortunes since he dispensed with the services of Sean O'Driscoll and brought in Dean Saunders to manager his mixture of loans and short term contract stars.  Ryan's supposed revolutionary player recruitment policy has backfired as the stars he has brought in, such as Diouf, have failed to ignite what now appears to be an unsettled dressing room as proven talent such as Mr Sharp have disappeared to pastures new.  The only sure thing about Ryan's strategy is they are now firmly on board the League One Express with very little hope of getting off.

So will we get three points today?  After Tuesday's mauling by a poor Cov side it's anybody's guess. Will we keep a clean sheet?  Will O'Brien start?, Will Colin be unveiled as manager after the game?  All questions that will hopefully answered by 5pm.  Another fraught and tense afternoon in prospect at the Theatre of No Ambition me thinks.  Despite all the doom and gloom I do have a tiny spark of optimism.  Come on down Colin and join the madhouse. You'll enjoy it really!
Can't wait.
MOT