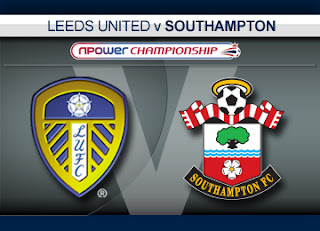 Kicking off at the time slot that used to be reserved for Jim'll Fix it or Dr Who is odd to say the least but with Leeds' clash with table toppers, Southampton, due at 5.20pm the Happy Chocker, Quiet One and yours truly were en route to the Theatre of Renewed Hope just as the rest of the games were kicking off. The members bar was quieter than usual as we pondered the forthcoming game.  With the Saints flying high and boasting an impressive squad this was always going to be a difficult game but would Colin be able to fire up his troops and send the Saints marching back to the south coast pointless?

The team was the same as last week but for Bromby filling in at full back for the injured Bruce.  New signing Webber was on a bench packed with strikers.  I was optimistic, not for the first time, of a Leeds win.  The planned protest against Capt Birdseye didn't seem to materialise but the presence of the TV cameras reduced the crowd to just over 20,000.  The atmosphere inside the famous old stadium was cranked up as the game got under way as Leeds flew out of the traps and rattled the Saints in the first ten minutes.  Snoddy had a clear penalty turned down for handball and Clayts tried an ambitious volley that the Saints goalie, Davis, just managed to smother.  This was a Leeds team that suddenly had pride, passion and purpose............so different from the laboured, directionless team that finished Lord Larry's reign in charge but with still the same players? 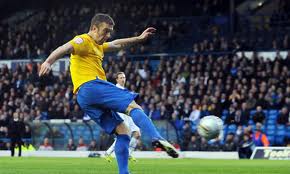 Leeds were all over Southampton as they pressed and harried the South Coast team into mistakes with a more attacking formation than last week.  Snoddy was playing wider on the left and Aidey White patrolling the right.  "Good start....we're looking impressive" I commented to HC but then disaster struck.  Leeds lost the ball on the left flank leaving the Saints winger in acres of space. He played a simple ball to the back post where Lee had drifted away from his marker to head the ball back to the league's leading scorer, Lambert, who had also managed to find space on the edge of the 6 yard box before thundering a volley past the helpless Lonergan.  1.0 Saints and they'd only had one shot.  Mmmm we didn't deserve that but I suspect Colin would have something to say at HT about the marking in the Leeds defence.

Leeds were soon back on the front foot though.  White was revelling in the space he was allowed down the right and he so nearly set up Snoddy after he chased a ball to the bye line and cut back before picking out Capt Scot with a lovely cross.  His volley sailed into the South stand though.  Further pressure created a chance for Ross Mac as he hit a dipping shot inches past Davis' post.  Surely it was only a matter of time before we scored?  Connolly had replaced the injured Bromby as Leeds turned the screw.  Becchio was next to test Davis as he met a sweet cross 5 yards out but somehow the ball stayed out.  Leeds were well on top and feeding on the vociferous support Leeds surged forward.  Michael Brown won the ball in his own half and then sprinted towards the goal.............jaws dropped around the stadium as his old legs showed a fine turn of speed............before a desperate block in the box denied him the equaliser.  Becchio was causing the resolute away defence all sorts of problems as he turned in an unrecognisable performance compared to some of his recent efforts.  All of a sudden he's a new man!  We might have been one goal down but this was good to watch.  We must score soon.  Snoddy so nearly brought the teams level just before half time after another sizzling run.  We might have been one down but the team went off for their half time cup of tea to a standing ovation from the battle hardened Leeds fans.

Positivity was oozing out of every corner of the gents as the urinal philosophers dissected the first half proceedings.  "That was a lot f****** better than the Donny game" & "Warnock's certainly had his foot up their arses this week if that's anything to go by" were two of the more succinct comments.  All of a sudden I could see a peep of light at the end of the tunnel for the mighty whites.

Nigel Adkins made two subs at the start of the 2nd half to try and wrest the advantage back from Leeds but within two minutes Becchio stretched to reach a fizzing cross from Snoddy only to steer the ball agonisingly close to the Saints post. "A goal's coming" I confidently informed HC.  Leeds were now battering the promotion contenders.  Becchio thundered a volley that Davis turned away and then he made an incredible double save to deny the Argentinian on the line.  Webber, on for White, then had two shots in quick succession that were both stopped brilliantly by Davis in the Saints goal.  He was now starting to seriously piss me off.

Richard Chaplow found space in the Leeds box and fired over but all the action was at the other end as Davies pulled off save after save to deny Leeds.  There was still time for Leeds to get at least a point though.  Colin threw Sam on for Brown as Leeds went all out for an equaliser.  He made an immediate impact as he crossed for Ross Mac who sent his header wide.  Webber looked a handful as his combination of good touch and fleet of foot impressed the watching Leeds fans.  But it was still 1.0 and now only ten minutes to go.

Leeds piled forward leaving themselves exposed at the back but every time we looked like scoring Davis would pull another stunning save out of his repertoire.  Bastard!  How we didn't score in a goalmouth scramble with just 5 minutes to go I will never know.  The ball bounced about in the 6 yard box twice hitting the bar aswell as legs and arms blocking desperate shots.  Somehow the ball stayed out of the Saints net.  Maybe there was an element of divine intervention from above? 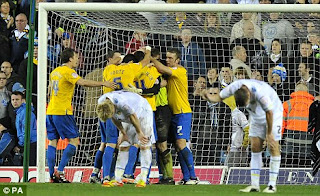 At the final whistle every single Saints player mobbed their goalie Davis.  He had had an outstanding game and deservedly won the MOM award.  The Leeds crowd were in good voice at the end despite the result,  they know a good performance when they see one.  Becchio was back at his best, Clayton was busy, everyone showed a passionate commitment that has been missing all season.  Webber and Sam looked dangerous during their short time on the field.  Yes we might have lost but I felt a lot happier in the knowledge that the team has now got some direction and bite on the pitch.

Considering we had just been beaten the journey home was very upbeat.  Leeds had 22 shots with 12 on target and 56% possession against one of the stand out teams in the league. Mr Warnock will be pleased with that and although the play off's might be a step too far this time round the new regime augurs well for next year.  Things are looking brighter on Planet Leeds.  Green shoots of recovery are on the way.  6 points off the play off spots..............we couldn't sneak in could we?  Dear Jim, Could you fix it for me to watch Leeds Utd win the championship play off final in May..............
Can't wait.
MOT


Posted by Andrew Butterwick at 23:30