There was an unmistakable buzz about the place as we left the car park for the familiar walk down Elland Road  for this match with Big Sam's Hammers. Buoyed by some stirring performances since Saint Neil arrived the Leeds fans were once again out in force and expectation hung heavy in the West Yorkshire air.  For the 4th game running we were playing a team above us in the table but the confidence gained through the win at Boro and the epic shows against Hull and Saints was surging through not only the players veins but also the majority of the fans.  Suddenly LS11 is full of smiling faces again.......well what passes for smiling faces at the Theatre of Renewed Hope!  The Happy Chocker and Brother Chris were optimistic of a win with the only debate being if we've still have enough time left to mount a play off challenge. 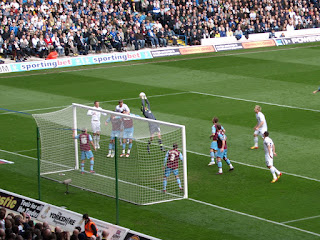 The 3,000 Hammers fans added to the electric atmosphere inside the ground as the game got under way.  Leeds started with the same eleven as at Boro.  Not surprisingly Leeds came out with all guns blazing in the first 5 minutes in the wake of a stirring team talk from Saint Neil forcing two corners in as many minutes.  The biggest crowd of the season fed on the early pressure and cranked up the decibel levels.  Agent Warnock had got his wish for a 30,000 plus crowd and they were doing their best to both lift the home side and intimidate the away side.  Snoddy tried his luck with a typical jinking run before young Tom Lees fired a shot in from outside his box.  15 minutes gone and Leeds were more than holding their own in a tight, tense affair. 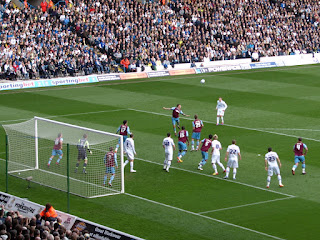 West Ham showed glimpses of their class with Tomkins prominent in most of their effective moves but it was Nicky Maynard who nearly opened the scoring on 20 minutes as he broke free from Robinson before Lonners made a superb block and save.  The match ebbed and flowed as two titans of the Championship slugged it out like two old style boxers.  Snoddy curled a free kick agonisingly close to the post whilst at the other end the new found resistance of the Leeds defence was being tested to the full by big Sam's stormtroopers.  "one goal will win this" HC suggested as the game headed for the break.  Leeds continued to press and had the ball in the Hammers net just before half time after Snoddy guided in a Becchio flick but the linesman was already flagging for some unknown offence.  HT 0.0.

The first half had been as tight as expected with Leeds probably just shading the contest so far.  When big Sam took over at West Ham I remember him being interviewed. He was asked if his style of management would suit the "West Ham" way and would he be changing their style?  His answer was very succinct. "what is the West Ham way? If it involves playing pretty football and winning nothing then yes I will be changing the style...........to one that wins things"  On the evidence of this game he is certainly a man of his word as their style is now a lot more let's say functional rather than flair.

Aidey White had a good chance in the early stages of the 2nd half but he dragged his shot wide of the goal after some excellent approach work.  If his final ball was average to good he would be better than Gareth Bale but he does frustrate me with his lack of care on that crucial final pass or shot.  Leeds did start to turn the screw if only slowly.  Connolly latched onto a Ross Mac free kick and forced a superb save from Robert Green.  Paul Robinson lifted the crowd with three bone crunching challenges as the mighty whites sniffed the possibility of pinching all three points.  Carlton Cole had replaced Maynard and although the Leeds crowd taunted him with chants of "you're just a shit Emile Heskey" he did add just a touch of class to the Hammers front line.  That class come to the fore as he rose and headed just over the bar from a free kick. The clock surged towards the last 15 minutes with the tension in the stadium rising with every second.  It might not have suited the neutrals watching but this was a real gut wrencher for the committed fans.  All we needed was one goal.................so off went Ross Mac and White to be replaced by Weber and Forssell? 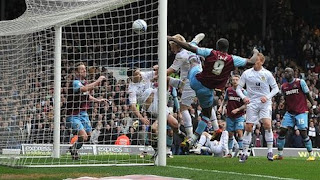 Both teams locked horns for the last ten minutes to try and get the win they both needed. The tension was almost unbearable and then Leeds broke the deadlock.......Weber crossed from the left Green tipped the ball away but Connolly swooped to head the ball back onto the bar...............Becchio was first to react as his goal poacher instinct kicked in and Leeds were 1.0 up with just eight minutes to go.  The ground erupted in a cacophony of noise as the Leeds fans celebrated as if they'd just been promoted.  All we had to do now was close the game out?  How difficult is that after fighting tooth and claw for all of the game to get the lead?  Well in truth too difficult for Leeds.  Driven by the adrenaline rush of the goal Leeds continued to attack looking for the 2nd killer goal but left themselves too exposed at the back.  Ex Leeds man McCartney found space on the left but sliced his cross just under the bar.  Lonners tipped it behind for a corner.  One minute left............please keep them out.........just this last corner and then we really can believe we can get to the play offs.  The corner came in and almost in slow motion Collins out jumped the Leeds defence and looped the ball into the top corner.  1.1, triple bollox!  The 3,000 Hammers were ecstatic, just as we were when Clayts got our equaliser at Upton Park.  There was no way back for Leeds from this though and the game finished 1.1.

This definitely felt like a defeat as we streamed away from Elland Road.  A good performance spoilt by slack marking at a corner. So disappointing.  Saint Neil has got the team playing with pride and passion again epitomised by Paul Robinson's no nonsense approach to tackling an opponent.  Clearly he is trying to launch the attacker into row z with each challenge he makes.  Leeds fans like that. Clayts, O'Dea and Robinson were my stand out players today but in truth it was another impressive team performance.

So we pick ourselves up ready for Forest on Tuesday and then the trip to the Lions Den on Saturday. Still only 5 points off 4th, 5th and 6th spot after today's game. Agent Warnock will still be working on the Mission Impossible plan me thinks?
Can't wait.
MOT

Posted by Andrew Butterwick at 19:31