Millwall away always gets the adrenaline going and this was no exception.  After a competitive journey of quizzes the Happy Chocker, Quiet One, Jusser and yours truly arrived in the sunny capital just in time for swift refreshments in the Barrowboy and Banker hostelry near London Bridge station.  The atmosphere inside the pub was electric as the gathered clans of the extended LUFC family lustily ran through the Leeds United songbook.  Confidence was high despite the seven goal drubbing by Forest on Tuesday.  "we have kept clean sheets on the last three away trips" I kept reminding everyone. London Bridge station seemed to have more Leeds than Millwall fans as we made the last leg of the journey to The New Den. 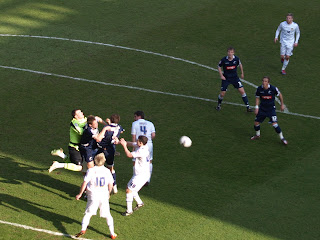 Saint Neil had made just one change to Tuesday's team bringing in Alex Bruce to centre half with Tom Lees moving to full back.  Connolly moved to the bench. The opening exchanges were not surprisingly robust with Snoddy in particular receiving and dishing out some tasty tackles.  The New Den is not the place for shrinking violets and Leeds were certainly up for a battle. The first twenty minutes were tense and scrappy with neither team showing any quality or confidence to put their foot on the ball.  This game clearly wasn't going to be a classic in the footballing sense.

Chances were at a premium with Leeds' most threatening spells coming from free kicks whilst at the other end Lonners easily dealt with Millwall's brief dallies in attack.  As the half drew to a close the 2,200 Leeds fans tried to lift their team but as the ref brought the half to an end Gary summed it up succinctly "you'll struggle to write much about that half" he correctly observed.  Too much ball in the air and too few players willing to get the ball down and play. Millwall looked jittery at the back but Becchio was struggling to take advantage. 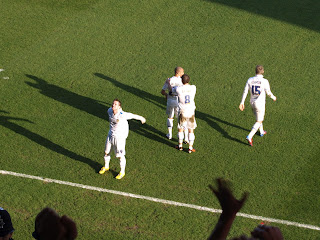 Leeds came out for the 2nd half in a much more positive manner.  They were attacking the stand where the Leeds fans were and seemed intent on gaining the impetus.  The busy Ross Mac received the ball with his back to goal and hit a shot on the turn but ex Leeds player Maik Taylor got down well to save.  This was better and the decibel levels were lifted in the ground as both sets of fans tried to out sing each other.  A game that had 0.0 written all over it in the first half was now looking like it could even become a goal fest.  Henry received a yellow card for diving as Millwall had what seemed like a good penalty shout turned down soon to be followed by another ask for a penalty.  Leeds rode their luck and broke quickly with Clayton driving out of defence before releasing Snoddy on the inside right channel.  He taunted the defenders as he danced into the box before picking out Ross Mac in the 6 yard box to give Leeds the lead. Get innnnn!  Ecstasy all around me as the travelling army celebrated.  Now could we keep another away clean sheet? 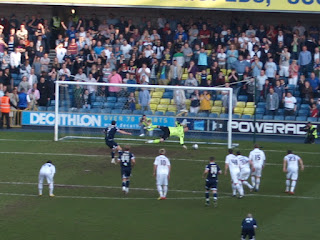 Within 2 minutes Andy Keogh had won a penalty as he was brought down in the box.  Millwall fans were slightly miffed by the ref's quick whistle for the spot kick as a Millwall player rifled a shot past Lonners into the net.  A penalty it was though.  Why can't we keep our heads after we score?  Darius Henderson stepped up to take the kick but the roof coming off the away stand told you that Lonners had saved the kick and Leeds were still in front.  Excellent.

Millwall pushed on looking for an equaliser leaving space at the back.  Leeds exploited this on the counter attack and Ross Mac should have killed the game as he created a chance 8 yards out only to fire his volley straight at Taylor in the home goal.  Bollox that would have settled the increasingly fraught nerves.  Those fraught nerves were jangling even more minutes later when Millwall's Robinson rattled the bar with a header with Lonergan well beaten.  4 minutes added time gave Millwall hope but a classic piece of gamesmanship by Neil slowed things down.  First the number 4 was held up on the subs board and Alex Bruce sauntered across to the half way.............meantime Neil is telling Ross Mac to take up a position on the far wing.....only to find that the 4 should have been a 44 all along and he had to come off from the other side of the pitch.  Nice one Neil.  Talk about taking the sting out of the game! 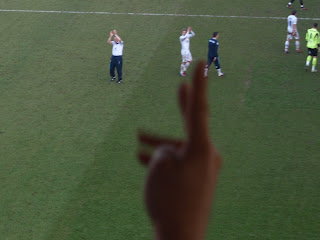 The final whistle sounded to signal Leeds' first win in South Bermondsey for 4 years.  The Leeds fans celebrated whilst the Millwall fans drifted away home.  This was a hard fought win for Leeds who rode their luck to keep a clean sheet.  Michael Brown had another good game and Ross Mac was a thorn in Millwall's side all afternoon.  Lonergan atoned for his seven goal embarrassment with a fine penalty save.  Snoddy showed in patches why he is a class apart from the rest of his team mates. This was not a classic by any stretch of the imagination. A instantly forgettable first half followed by an exciting 2nd forty five minutes as both teams tried to win the game.  A much needed win after Tuesday for Leeds but one that wasn't fooling the realists amongst the mighty whites travelling fans.

The long journey home gave time to reflect on Leeds position in the table, 3 points off the play off's.  It seems nobody wants to cement their position in the top six at present.  Any thoughts of bridging that gap are still unlikely in my book.  Dafter things have happened though but with away trips to Reading, Blackpool and Cardiff to be negotiated between now and the end of the season it's difficult to see anything other than a finish just outside the coveted top six.  Watford up next at home.  Can we keep a clean sheet at home as well as away?  I do hope so.
Can't wait.
MOT


Posted by Andrew Butterwick at 23:55