Post Cup afterglow, Diouf and the the Brizzle trip.

If I'm being truthful there's not many weeks when Leeds supporters can enjoy work and life outside football glowing in the aftermath of success on the field that has registered on the national Richter scale of football awareness.  So this week's thrilling dismantling of a strong David Moyes Everton team live on Sky provided an oasis of happiness in the brutally harsh world of workplace football banter for yours truly.  For the Liverpool, Citihad, Villa and even the Scummers fans who populate my place of work our victory against the Toffeemen had not gone unnoticed.  Phrases such as "you deserved it" and "Warnock's got a good bunch of lads there" were generously thrown my way.  Suddenly dirty, horrible Leeds are the flavour of the month and I'm loving it.................even the solitary Bluenose fan couldn't upset me with references to a Mickey Mouse Cup and the dastardly deeds of the Yorkshire police in their role in the Hillsborough disaster.  I did point out to him that whilst there was an understandable dislike for the boys in blue from the Merseyside fans the actual Police who were getting dogs abuse on Tuesday were the West Yorkshire constabulary not the Hillsborough offending South Yorkshire force.  Still I don't think geography has ever been a strong suit in the land of the missing hub caps? Calm down! 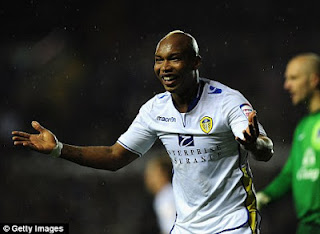 The architect of Tuesday's victory was El Hadji Diouf, The Senegalese Stroller, who has taken Leeds by storm since his controversial move to West Yorks.  His reputation as a nasty piece of work coupled with his altercation with Ross Mac in the tunnel after the Donny match last year meant that his reception on his arrival was always going to be muted at best.  Even his harshest critics must be impressed though with the way he has won fans round with superb performances on the pitch but more to the point his clear empathy with the fans and genuine inspiration and mentoring of the team around him.  His habit of giving his shirt to a fan after the match has now extended to doing it at half time and the way he took the trouble to go to every  corner of the ground to applaud the fans after Tuesday's victory was typical of the man. It must be one of the most unlikely footballing partnerships in recent years but the Warnock and Diouf duet might just be the catalyst to fire Leeds to unexpected success in this troubled season for the mighty whites?

I say troubled because as I write this post the longest takeover/buy out in football history drags on without conclusion.  This week's announcement that the GFH Capital, A Middle Eastern based Finance House had "signed an exclusive agreement to lead and arrange the acquisition of Leeds City Holdings" sent cyberspace into the 879th tail spin of the summer on the basis that the deal was done..........but it's not quite done yet so we eagerly await the next step.  The latest announcement leaves more questions than answers though.  Exactly what does "lead and arrange the acquisition" mean?  Are they buying Leeds or are they selling it on Cuddly Ken's behalf to some , as yet unknown, Middle East mates?  Key question is will it all be resolved in time for more funds to be available for January 1st?  Not sure anybody really knows that yet?

Bristol City away is the next test for Warnock's warriors and I suspect selection headaches will be the order of the day for Neil despite a still lengthy injury list.  Does he risk bringing Kenny back or stick with the more than capable Ashdown?  Will White start and if so in what position? Will Michael Brown find himself on the bench after a rousing game against Everton?  Did Danny Pugh do enough to keep the left back shirt? (Can't believe I've just written that!)  These are all good headaches for NW in front of what will be a testing game against a team we have had good success against in recent years.  I've a sneaking feeling we might be witnessing a thrilling 3.2 victory for Leeds and don't forget my old trusty crystal ball burst back into productive life on Tuesday in predicting the 2.1 win.  Another successful tip will do nicely thank you.

Travels of a Leeds Fan.
Posted by Andrew Butterwick at 19:03

I think Diouf could be the master stroke for Neil Warnock as was Gordon Strachan was for Howard Wilkinon, he needs the big stage and the attention he is getting at Leeds and he is loving it.