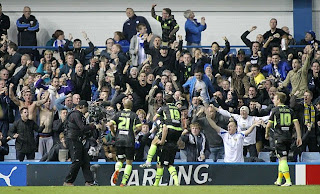 After Friday's events at Hillsborough it would be easy to adopt a siege mentality as the lower echelons of the nation's media delighted in speculating that the dark days of football hooliganism were returning with good old dirty Leeds at the vanguard of this descent into total anarchy.  Calls for the banning of Leeds fans from away games and even home games have come thick and fast since a certain Mr Aaron Cawley strode onto the Hillsborough turf and assaulted Chris Kirkland.  Cawley got his come upance today when Sheffield magistrates sentenced him to a massive 16 weeks in jail together with a 5 year football banning order, the third such order the 21 year old has had in his short life.  The general opinion amongst Leeds fans is that the sentence is too short and won't act as much of a deterrent to other transgressors.

Aaron Cawley has brought disgrace and an unwelcome spotlight on Leeds United and I have been pleased by the almost unanimous reaction of Leeds United fans in condemning not only the actions of Cawley but also those who traded missiles with the Wednesday fans in the north stand. There are times when you have to stand up and be counted if something is wrong even if it is with your own beloved club and this is one of those times. 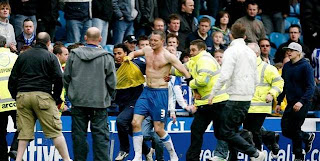 After saying that some of the "holier than thou" comments that came out of South Yorkshire over the last few days have stuck in my throat a bit.  Here is a statement Sheffield Wednesday issued "Sheffield Wednesday will assist South Yorks police where ever possible in investigations into the disorder at the match"  it continues "As with any event at Hillsborough we will review match day operations and assist police in their investigations" Now you may think these statements came out over the weekend from S6 but you would be wrong.  They were made in the aftermath of a pitch invasion by Wednesday fans after being relegated by Crystal Palace in May 2010.  During the invasion Clint Hill, the Palace defender, was punched and kicked by 7 to 8 Wednesday fans.  Clearly two wrongs definitely do not make a right but the way the Radio Sheffield presenter was hysterically reporting the Leeds incident after the game you would think that Wednesday have 100% angels following them.  That is not the case and in line with 99.99% of other clubs they have their fair share of trouble causers, thugs and hooligans and to pretend that the only club in England that has a problem is good old dirty Leeds is at best sloppy journalism and at worst scaremongering.

Away from the darker side of football the lengthy takeover saga trundles on.  The latest speculation and rumour surrounds the news that an Islamist investment expert has confirmed that the takeover would be Sharia compliant if it goes ahead despite the fact that alcohol and pork pies are consumed in Elland Road on match days alongside betting booths for those of us who like a flutter!  Now call me picky but you'd have thought that detail would have been noticed a bit sooner than the 5th month of the negotiations?  I wonder if they insist on Sharia law for any criminal deeds impacting Leeds United? If they do Mr Cawley's 16 week sentence might be superseded by him being stoned at half time during the Birmingham game.  That would be better than the usual half time "entertainment" me thinks.

Back to football matters and the small matter of our game with Charlton Athletic.  The visitors are fresh from promotion from League One and have had a steady start to life back in the championship.  Worryingly their away form is better than their home form and we are playing them on the dreaded Tuesday night!  After saying that I think the fantastic team spirit Mr Warnock has drummed into the team should overcome any lack of quality the current squad has and we will be too strong for Chris Powell's South London hopefuls.  With a bit of luck the only thing we will be talking about after this game will be a solid Leeds victory.  You never know we could creep into the top six if we do?


Posted by Andrew Butterwick at 20:48