Varney stars as Leeds march past Saints into the last 8.. 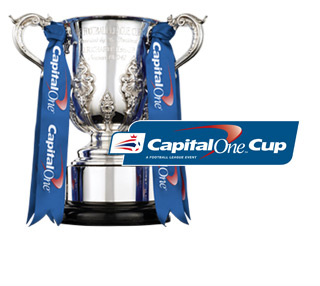 Since our heroic dismantling of Everton's League Cup dreams our form has taken a worrying dip.  With the possible exception of the away win at Brizzle the performances have been less than inspiring albeit the only defeat was at the hands of Birmingham and Lita's long range thunderbolt.  So tonight's League Cup clash with a Saints team struggling to come to terms with the new Premier League status is a welcome break from the pressure for vital league points. On the horizon is the faint possibility of some long overdue Wembley glory for the mighty whites so the woeful recent form was conveniently shunted to the back of my mind as we headed to the Theatre of the everlasting takeover saga.  As usual the Happy Chocker and the Quiet One are on board together with our lucky omen, daughter Sarah, who's one and only game this season was the Everton one.

As ever in the League Cup team selection is a lottery.  Combine this with a quick turn round for Leeds and Friday's game with Brighton I was ready for anyone appearing on the team sheet.  Even Ethel the Tea lady must be in line for a place on the bench! Pre match refreshments were taken in the Drysalters where we eagerly scanned cyberspace for the team news.  Nigel Adkins had rung the changes for his Southampton team with no less than 11 changes from the weekend starting line up.  Mint.  Not so sure the Southampton fans were that enamoured though having made the 200 mile trip to watch their reserves.  NW had tinkered with the Leeds side aswell with Becchio on the bench and Reg Varney partnering Diouf up front.  Brown was in the middle with Austin and White and Tonge out wide.  Byram filled in at right back with Pelts at left back.  Pearce and Lees completed the team with Ashdown in goals.  Mmmmm a warm glow of anticipation seeped into my pores as we marched down Elland Road to take our seats.  Another paltry crowd of just 17,000 had turned up to watch this cup game.

Leeds started well against a Saints side that oozed lack of confidence.  Leeds were much sharper than of late with Brown and Austin taking an early grip of the midfield.  Up front Varney's pacey diagonal runs were bearing fruit as the team in white looked to be the one from the higher division.  Both Varney and Tonge went near to snatching the opener in the first 15 minutes.  Southampton looked poor but Leeds can only play what's in front of them.  The Saints looked in disarray at the back.  None more so than when a timid back pass left Varney with a clear lob past the stranded goalie but the ball came back off the post and bar.  Bollox!  Varney surpassed that miss minutes later though when he stretched to finish a perfect ball from Diouf from all of 9 inches out and in the centre of the goal..............he managed to miss by a good yard.  That takes some skill.  His blushes were partly saved by the linesman's flag.  When Austin missed a clear header from 8 yards I began to think we might regret all these misses? 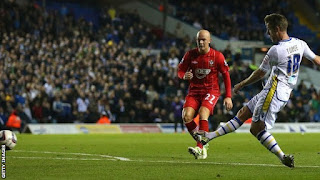 A Leeds goal was inevitable though and it came on 34 minutes when Varney's pace took him past the Saints full back..................his pull back from the bye line was parried by the keeper right into the path of Tonge who calmly side footed Leeds into the lead.  1.0 and no more than the home team deserved.  For once I was enjoying Tuesday night football.  Lucky omen, Sarah, seemed to be taking it all in her stride.  I felt like explaining that we don't win every game but I thought no let her find out the hard way.

Leeds cruised to half time in full control.  The only negative from the first half was we had only scored one goal.  Varney had definitely added a new dimension to the Leeds attack with his intelligent running despite his cringeworthy misses.  The whiff of Wembley was in the air and what passes for happy faces at the Theatre of Hope were in plentiful supply.

The 2nd half continued with Leeds dominating for long spells of the game.  Brown was enjoying what he enjoys doing............disrupting play and giving the ball to a Leeds player.  Austin was cruising around with menace and Diouf epitomised class every time he touched the ball.  Varney was the surprise of the night though with a tireless display that will give NW a selection headache for Friday's game at Brighton.  Nerves were starting to jangle amongst the Leeds faithful the longer the score remained at 1.0 as the game entered the last ten minutes.  We were still in reasonable control of the game but it only takes a second to score a goal and my finger nails were starting to disappear.  I needn't have worried.  Austin suddenly erupted out the midfield morass like Hurricane Sandy attacking the US Eastern seaboard on a barnstorming run through the Southampton defence before shooting low and hard................Davies could only direct the ball into the path of Diouf who greedily accepted the chance in front of the adoring Kop.  Get innnnnnnnnnnnnnnnnnnnnnnn!  2.0 Leeds game over.  The kop taunted Adkins with "You're getting sacked in the morning" before a premature chorus of "Que sera sera we're going to Wemberlee" wafted round the wet West Yorks sky.

Varney was substituted with a minute to go and left to a rapturous ovation from his newly converted fans.  Becchio replaced him and with his first touch dispatched a penalty after Tonge was dragged down in the box.  3.0 Leeds and good night Vienna.  Quarter finals here we come.

After three poor performances this was a lot better.  Yes Southampton were poor but Leeds contributed to their demise with a good all round display.  The passing was better and probably significantly  the long ball option, much favoured in recent performances, was almost non existent with Becchio on the bench.  Varney did run the channels extremely well allowing Diouf more opportunities to show off his exquisite skills.  So into the draw for the quarter finals we go and another step towards Wembley.  If we can avoid one of the big boys you never know? Villa, Boro, Bradford or Norwich would be nice.  Whoever we get I will definitely be taking Sarah now she has become our official lucky mascot.

We now go to Brighton on Friday night in good heart and with another large away following sampling the delights of Brighton's hostelries from mid day onwards it promises to be another epic awayday. Bring it on.

Posted by Andrew Butterwick at 23:32