It might be the dawn of a new era but the new owners hadn't brought the Dubai weather with them for their first game in full charge of the mighty whites.  Rain tumbled persistently from slate grey skies so much so that the game was in doubt with just an hour to go to kick off. The pitch passed a 2nd inspection from the referee though and the game was on.  All I can say is that the Elland Road playing surface must have the best drainage system in the world to withstand the amount of rain it has had in the last three days.  The Happy Chocker had rashly decided to accompany Jusser the beermonster on the work's Xmas pub crawl in York rather than see Leeds try to win their 5th league game out of 6 against the high flying Teesiders.  A decision I suspected his liver would seriously object to round about kick off time!

I sheltered in the members bar for pre match refreshment and to contemplate Warnock's warriors chances against Tony Mowbray's promotion chasers. Boro arrived at the Theatre of Renewed Hope on the back of a run that had seen them win 3 of their last 4 league games and sitting nicely in the play off places.  Jonathan Woodgate also returned to the ground where he starred both on and off the pitch for Leeds in those heady days when were competing at the top end of the Premier League and right across Europe. Warnock's team sheet showed three changes from the Chelsea game as Tate, Norris and Kenny returned in place of Pearce, Brown and Ashdown respectively.  This had all the hallmarks of a tight game with a good few goals.  Would it be a case of "after the Lord Mayor's show" for Leeds after their League Cup exertions in midweek?  Or would the positive vibes of the completion of the takeover inspire the team to new heights? One thing for sure Leeds would need to be at their best to get anything out of this game against a strong Boro side.

Over 25,000 sodden fans were inside Elland Road as the game got under way with a boisterous 3,000 away fans making the early noise. Boro started well with the robust left footer,Jutkiewicz, catching the eye with an early shot and then a looping header that tested Mr Kenny.  Boro were crisp and direct with their passing and caught Leeds slightly cold but gradually Leeds woke up and threatened Jason Steele in the Boro goal. Tonge hit a poor free kick into the wall before Byram rose to meet a Diouf corner and send a header goalwards but Steele clawed the ball away to safety. 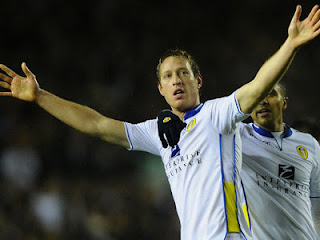 Boro were ahead on 28 minutes though when their quick counter attacking style paid dividends. Levi Roots lookalike, Emnes, slotted a ball through to Jutkiewicz who shot low at Kenny.  The ball rebounded kindly to the left footer and his second attempt found the net via Tate's outstretched boot. 1.0 Boro and the travelling fans erupted with joy. This was going to be a difficult one I mused.  Since Warnock has arrived at Leeds he has instilled a "never say die" attitude in the team and Leeds were soon hitting back at Boro.  Young Byram powered through a weak Boro tackle to dribble and fire a curling shot that had Steele motionless as he watched the ball drift inches past the post.  That's better. Thomas, who had been quiet up to then, pounced on a long clearance from Kenny to drive into the box only to pull his shot agonisingly past the post. Leeds were now troubling the Boro defence as they went in seek of an equaliser. When it came it was special.  Byram swung in a teasing cross which Boro failed clear.  Thomas challenged for the second ball and as it fell into the box Becchio swivelled and hit a stunning half volley into the top corner. Get in! 1.1. Becchio just loves playing against Boro.  His volley in the televised game at Boro two seasons ago was good but not as good as this beauty.

Half time 1.1. A half of surprisingly good football given the conditions.  Peltier again looked exposed at left back and NW made a radical change during the interval with Aidey White replacing Paul Green.  Pelts moved to right back, White at left back and Byram pushed into midfield.  White was in the action straight away as he broke and fired a tepid shot at Steele.  The game was very open as both sides looked to steal an advantage. Jutkiewicz wasted a good chance as Boro piled on the pressure.  Leeds were holding firm though  with Tate , Lees and Kenny all working overtime to keep the scores level.  At the other end Diouf escaped his marker and got to the bye line and pulled back a ball that just cleared the eager Leeds attackers.  Nerves were beginning to jangle as the game entered the final twenty minutes.  David Somma replaced Thomas and received a thunderous reception.  I wonder what Ross Mac makes of that? 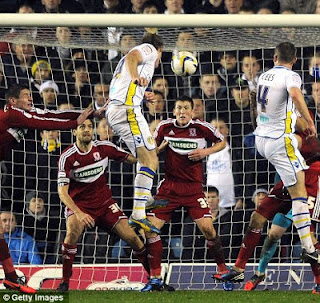 Leeds had their tails up now and Somma showed just what we'd missed from his long absence as he showed some nice early touches.  Diouf was prowling like a caged tiger looking for the breakthrough.  He swung a delicious cross into the Boro box............Becchio flicked his head and Steele turned it over for a corner.  Diouf glided over to take the corner.  Becchio found a yard of space and the Argentinian met the corner with the force of an Exocet missile as the ball flew into the net. 2.1 Leeeeeeeeeeeeeeeeeds! Becchio yet again breaking Boro hearts with a superb goal.  The weather outside was frightful and this goal was definitely delightful!

Becchio's goal signalled a frantic and frenetic ending to the game. Pearce replaced Peltier to add some steel to the Leeds defence who were under incessant Boro pressure.  The clock slowed to a crawl as the last ten minutes of an enthralling game ticked by.  My stomach started to tighten as Mowbray's men threw everything at Leeds but the mighty whites held firm.  Steele, the Boro goalie, went up for the final Boro corner.  Leeds cleared and Diouf latched onto the ball 70 yards from goal with nobody between him and the goal.  The ref blew his whistle before he could take advantage though as Leeds made it 5 wins out of 6. Promotion form.

The home crowd were in good voice celebrating a hard fought win against a good Boro side.  Byram was outstanding for Leeds but the MOM must go to the sublime Becchio.  He's not always the best outside the box but give him a sniff at goal and he's in his element.  Two more superb efforts to take his total to 17 for the season.  Diouf did what he does best in holding the ball up when he's no right to and generally having a calming influence when we need it. Tonge did well as did Tate and Lees at the back.  All round a good battling performance that takes us within two points of the play off places.  Mint.

Smiles have replaced frowns on the faces of most Leeds fans of late due to the fact that we are in a rich vein of form and we can now see a light at the end of tunnel of the field with the arrival of new owners, GFH. Notts Forest away on Boxing Day followed by the Codheads  at the KC next Saturday.  If we can prise 4 points from those fixtures then we can all look forward to the new year with renewed optimism. There's a rather strange atmosphere on Planet Leeds at the moment. Something akin to confidence and contentment......very unlike Leeds! So it will be Turkey and stuffing sandwiches with a couple of mince pies for the trip to Forest on Boxing Day.