It's January and the good ship Leeds is drifting aimlessly again!

After Saturday's annual aberration at Oakwell it's fair to say there has been a huge amount of discontent amongst the Leeds faithful. The game was yet another watershed for Leeds and Warnock's stock is at a terminal low with the knowledgable Leeds fans. After nearly a year in charge Leeds have not progressed in any shape or form and Warnock's excuses for poor performances have worn as thin as a bulimic fashion model fasting for lent. The defeat to Barnsley summed up our current position. Zero shots on target and zero corners against a team who were bottom of the league. With the quality of players we have available it is difficult to approach any game with any realistic confidence given the seemingly inability to play any sort of constructive football. That is unless you call hoofing the ball in the general direction of Becchio as constructive?

But this isn't something that should come as a shock to the long suffering Leeds fans. It's January the traditional month of turmoil at the Theatre of Hope. We have had the usual "flatter to deceive" run up to Xmas where we somehow reach a decent League position in or around the play off's. Once The Xmas decorations have been taken down Leeds always seem to head downhill at a rate of knots. Even when we got promoted we tried our hardest to throw away the opportunity during the 2nd half of the season. The final game against Bristol Rovers famously saw us scrape into the automatic promotion spots but not before testing the resolve and nerves of the fans to breaking point. It's as if all the luck and good fortune is used up before Xmas and thereafter we are exposed to harsh reality. That's certainly what's happened this season. Other than the 2nd half at Huddersfield when have we really taken control of a game? So for all Warnock's skilful management of the media sound bites the table and the statistics don't lie. We are once again floundering without any true leadership, strategy or hope as we negotiate a tricky January and look forward to a very difficult February schedule. Change is needed quickly. 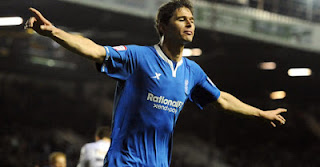 The replay at Birmingham will be a testing game. The fans that make the trip will want nothing less than a performance with passion and passing at the centre of Leeds' approach. Anything else will see the fans revolting. We can cope with getting beat if we play with some structure, style and passion. We can't cope when we get beat if we have no passion, organisation or ideas which is what is happening at present. Just to add to the despondency a certain Mr Zigic has completed his suspension and is available for the blues so he's bound to continue his scoring record against Leeds.

So not a lot of hope or expectation floating about on Planet Leeds for this one. I suspect I will be in need of therapy after this one...........that is unless Mr Warnock lives up to his assertion that he's "doing a great job" at Leeds. As the well quoted late Mr Clough would say "he's in the top one" in thinking that!

Posted by Andrew Butterwick at 19:48