The first day of the New Transfer Window saw the sun shining brightly as the Happy Chocker, Quiet One and yours truly headed for Elland Road for the clash with the Trotters from Bolton.  Hope and expectation was high amongst the Leeds faithful streaming into the pavilion for their pre match pints.  We might be in exactly the same position we were last year, just outside the play offs and hoping for an injection of quality into the team, but the subtle difference this year is we have new owners.............and they have some money to spend....don't they?  News that Clint Hill and Shaun Derry are allegedly on NW's shopping list didn't exactly have the fans swinging from the rafters in joy but these are early days of the rumour mill. I'm just going to concentrate on facts for the time being.  Despite the poor Xmas we have had we still have a tranche of "good" teams below us in the table, Blackpool, Bolton, Birmingham, Brighton, Derby & Wolves to name but a few so our position isn't terminal.  But we definitely need a lift from the transfer window. Baited breath at the ready then!

Warnock again shuffled his pack for this one with Becchio, Diouf, Pelts and Austin returning to the Leeds starting line up.  Ross Mac was deployed wide on the left with Becchio and Diouf up top.  Pelts returned to the problematic left back spot. The crowd of 22,000 was very subdued as the game kicked off.  Clearly the excesses of the previous night's partying were contributing to a significant number of hangovers inside Elland Road. Now the best hangover cure is an exciting opening to a game with chances at each end as a result of superb flowing football.  What we actually got was a combination of scrappy football that would have shamed a Sunday morning game in the local park.  There was lots of huffing and puffing from each side and the ball refused to stay on the grass for more than 2 nanoseconds as the clock ticked past twenty minutes.  Austin had come the nearest to getting a shot on target as he hit a timid free kick wide whilst at the other end Eagle's shot wide after good build up play.  If Leeds fans were looking for evidence that the defeats against Forest and Hull were mere Xmas indigestion then there were very much disappointed.  This was awful to watch.

Eagles finally got a shot on target after half an hour forcing a good save from Kenny. The half time whistle brought to an end one of the worst 45 minutes seen at Elland Road for a long time. 0.0.  Possession was given away continually by both teams leading to a game with absolutely no flow or structure.  According to the programme the new owners want to re-engage with the fans and get more bums on seats.  Well all I can say is that the marketing team at Elland Road are going to have a herculean task to persuade the punters who had shown up for this one to return never mind the disenfranchised ones who used to grace Elland Road.  The urinal philosophers had woken from their post New Years Eve slumbers and were at full throttle. "Shocking" "Dire" "Woeful" were words in plentiful use.  "the best bit of the first half was the Macadees bag blowing across the pitch" snarled one unhappy fan. Warnock again came under fire. "Time for him to go he hasn't got a clue" suggested one expert. "Same old shit a different year" said another. No there weren't many positive vibes oozing out of the gents during the half time break.

I suspect the Leeds dressing room was a hot bed of heated discussion as Warnock tried to motivate his team.  A virus had caused problems for a number of players and Green in particular looked to be away with the fairies for most of the first half.........but he wasn't the only one! 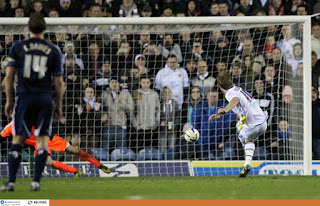 The second half continued very much like the first with the ball still spending most of the time in the air.  There was more of an urgency with the Leeds side though and they started to threaten the Bolton goal more the longer the game went on. It was by no means a classic game but at 0.0 Leeds still had a golden opportunity to snatch the three points and push further up the Championship table.  On 60 minutes Leeds had a half shout for a penalty turned down as Ross Mac tumbled in the box but they didn't have to wait long for the referee answer the next shout positively as Mears brought down the Scot.  Those fans who had dozed off were now awake looking for Becchio to convert the penalty which he did in some style. 1.0 Leeds. Get innnnnnnn!

The goal sparked both teams into life as the game opened out.  Leeds broke quickly as Diouf fed Ross Mac on the edge of the box but as he made space for himself he spooned the ball frustratingly over the bar.  Becchio then flicked a header over the bar before failing with a 2nd that dropped tamely into the Bolton goalie's arms.  At the other end Leeds had Norris to thank for a last gasp tackle to prevent a goal bound shot. In the end Leeds ran out reasonably comfortable 1.0 winners against a poor Bolton team who look impressive on paper but  not on the pitch.

The three points are welcome but the lack of quality in the performance is a big concern despite Leeds notching up their 5th straight league win at home since the Watford farce. It's also a win that leaves Leeds just 2 points off 6th spot in 8th place.  Just think where we could be if we started playing well? Very difficult to pick a man of the match today. Nobody played well.  In fact the Macadees bag would have been in contention for MOM!

The transfer window is now open and all eyes will be looking to see what Warnock does to strengthen the team.  We need better creativity, pace and height across the pitch if we are to improve. This will go down as another instantly forgettable game and not do anything to attract missing fans back to Elland Road.  In his programme notes Mr Bates thanked "the overwhelming silent majority" amongst the Leeds fans who had supported the management of the club during his tenure.  Mmmm I think he might be slightly over estimating the impact of Samantha's support there?  For a club the size of Leeds to be only keeping afloat by selling what decent players they have and replacing them with journeymen professional with little quality is not a strategy that will deliver anything other than the decline of a once great club.  I do hope the new owners have already figured that one out?

Birmingham in the cup next.  Will we have any new players signed? Will they be any better than the current offering? Time will tell.

Posted by Andrew Butterwick at 22:52