Match day dawned with bright sunshine and a harsh frost covering the delights of Selby. Cup games have their own special excitement and you don't get any better than cup games against the champions of England in the their own back yard. To say I was looking forward to this one is to state the bleeding obvious. I wasn't the only one getting caught up in the heady drug of cup fever though. Platform 2 at Selby station was alive with match chatter and the reassuring hiss of cans opening despite the early hour as the extended Leeds family prepared for the assault on Manchester. The Happy Chocker, Bro Chris, Quiet One and the beer monster Jusser were with me as we clambered aboard the packed train and headed for Manchester Piccadilly.

Everybody accepted we were massive underdogs. The amount of money that City's owners have underpinned their journey from perennial under achievers to champions is eye watering even in these days of obscene salaries and transfer fees. In comparison the first player that the Blues bought when their wealthy Middle East saviours, Abu Dahbi United Group, arrived was Robinho at a cost of £32.5m. GFH's first signing was Michael Tonge for an undisclosed fee. These harsh facts were conveniently stored in an inaccessible corner of our brains as the pre match optimism kicked in. After an epic fail for the new tram service from Piccadilly to the Etihad, they seemed to have vastly under estimated the number of fans who would use it, we caught a cab and arrived at the magnificent Etihad stadium. 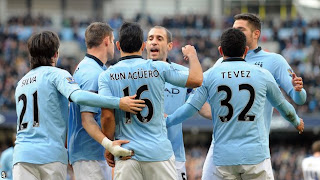 Warnock had made 4 changes from the Boro game with Diouf, White, Ashdown and Austin starting in place of Morison, Green, Kenny and Norris. The 6,100 Leeds fans in the away end tingled with anticipation as the game got underway. What we needed was to hold our own for the first twenty minutes against a very strong City side but it was the home superstars who made their mark from the very first second. Leeds started nervously unable to cope with the slick pass and move play from the champions and with only 4 minutes on the clock Leeds were behind.  Silva, Aguero and Tevez all featured in the build up as the giant Ya Ya Torre sliced through the Leeds defence before rounding Ashdown and sliding the ball into the net. 1.0 City.  This could be a long afternoon I muttered to HC. The blue tidal wave continued. Tevez clipped a shot just round the post and then Silva nearly found the net with a clever shot.  Leeds defenders didn't know whether they were coming or going and we'd only played ten minutes. 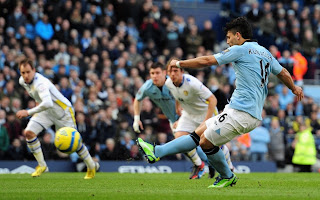 The massed ranks of Leeds fans were singing loud but with an increased sense of irony as their team succumbed to Mancini's magicians. City were 2 up on 15 minutes after Tom Lees breathed on Aguero as he went past him and ref, Clattenburg, gave a harsh penalty. He dispatched the spot kick with ease and suddenly 90 minutes seemed a hell of a long time for Leeds to play against the champions. This was men against toddlers.

The rest of the half saw a procession of blue control as City completely dominated proceedings except for one Ross Mac free kick that the home goal punched away. The irony in the Leeds songs got deeper the longer the half went on......."Michael Brown is not for sale" boomed round the Etihad followed by "You're not that special, we lose every week" and when "Stand up if you hate Man U" got an airing the whole stadium joined in.  Encouraged by the mutual singing the away fans then started the Poznan and that swung round the ground like a rumbling Mexican wave.  Leeds survived to half time with the score only 2.0.  In truth it could have been a hell of a lot more.

Hopes weren't exactly high as the second half kicked off but I did offer a token piece of optimism.  "Well if we can nick the next goal......................." at least that brought smiles from all around. Morison replaced Ross Mac and Norris swapped with the injured Brown.  It took only 6 minutes for City to kill the game with a third goal courtesy of Tevez. "Now this could get embarrassing" I hissed. The stats on the big screen showed we had managed only one shot on target.  At 3.0 we were sinking fast but that didn't dampen the spirits in the away end.  "Lets pretend we've scored a goal" was the next ditty followed by mass celebration then another Poznan followed by "Shoes off if you hate man U"  we might not have a very good football team but we have definitely got Premier League fans.

Leeds continued to struggle to get any sort of hold in the game.  The victories against Everton and Spurs seemed light years away as City tore Leeds apart without getting out of 2nd gear. Mr Warnock was advised to take a trip back to Cornwall by the frustrated fans.  City got a 4th in the 74th minute but the game was already gone. There wasn't a spark of hope from the Leeds team as the game limped to a 4.0 conclusion in favour of City. The Leeds players and home fans applauded the away fans at the end.  At least the mauling on the pitch was taken in good humour. The walk back to the station didn't dilute the frustration in witnessing another disappointing display away from Elland Road. City are a very talented team and would always beat Leeds if they played to their ability.  The resources the Blues have at their disposal are huge and it shows on the pitch.  The resources Leeds have at their disposal are minuscule and it shows on the pitch.  Did any Leeds player stand out today? No. A lot played to the limit of their ability and you can't ask any more than that. It's no disgrace to lose to a team like Man City but it's hugely difficult to see a time in the near future when Leeds United will be in a position to challenge for promotion into their league let alone compete with them on level terms.

Neil Warnock was upset with the fans chanting for him to go.  My view is that his time is up.  He's not moved the team on during his tenure if any thing we've gone backwards but the lack of stability and lack of funds off the field are an ever burdening millstone around the neck of this club.  Who ever replaces him will have the same issues until normal service is resumed off the pitch and the club returns to some sort of financial robustness.

A strange day really.  The atmosphere and banter were first class but the capitulation on the pitch was depressing. Next game up is Blackpool on Wednesday a game I will miss due to work.  Last time I missed a game we beat Stockport County away back in the League 1 days. Hope the same happens this time.

i enjoyed really much when i was there in this match.
i am from usa but i immidialy book cheap flight fares
i reached to them when i was using facebook.
follow us on facebook