The sky was slate grey over Selby as we boarded the Hull trains 9.05am to Kings Cross.  The miserable weather couldn't dampen the spirits of the Happy Chocker , Quiet One and yours truly though.  We were on an away day to London and they always seem to be that extra special.  It didn't matter that we were playing one of the form teams of the division in their own back yard and we desperately needed an away win to keep our slim play off hopes alive we were definitely going to have a good day.  After all the Quiet One had just become a teenager and I was on the verge of yet another birthday so it was celebration time.

As the celebratory beers flowed our expectations and confidence grew and by the time we pulled into Kings Cross we had convinced ourselves this was the day Leeds would shock the Eagles and secure their fourth away win of the season.  Alcohol has some amazing properties at times. It had persuaded me to put my hard earned cash on a 3.1 win for the mighty whites. After more pre match refreshments and an All Day breakfast at Garfunkels we were ready for the game but not before we bumped into Paul Walsh on his way to report on the game for Sky sports Soccer Saturday.  What did he mean "I've drawn the short straw this week"? 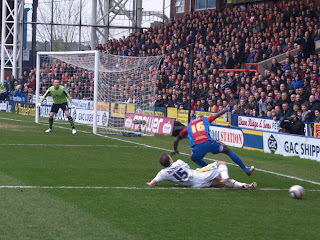 Warnock had stuck with the same team that did so well at Leicester whilst Palace had goal machine Murray up front with two tricky wingers in Zaha and Bolasie on show.  The game kicked off in front of a packed Selhurst Park bolstered by 3,000 plus boisterous Leeds fans.  Palace had the better of the opening spats with Dikgacoi heading over after ten minutes before Morison squeezed a shot over the bar for Leeds.  Wilfred Zaha, on a return loan from Man Utd, was reminded of just how much Leeds United fans love his parent club as he danced down the wing in front of the away support to a chorus of Shit, Scum, Bastard.  He was clearly shocked because he started waving and interacting with the unforgiving Yorkshire fans.  Reel him in! Minutes later he disappeared onto the other wing out of the way as he swapped with Bolasie but not before he swung in a lethal cross that Murray tested Kenny to the full with a stinging header. Leeds were battling well but it was the Londoners who were having the better of the play.  Murray again tested Kenny before Bolasie had two attempts fizz near the goal.  Ross Mac twice brought out saves from Speroni in the Palace goal.

The deadlock was broken on 27 minutes when Murray found space at the back post and ghosted onto a deep cross and easily beat Kenny from 4 yards out. Palace 1.0 Leeds. The home crowd burst into life driven on by the incessant banging of the Palace drum. Why do teams need drums to lead their chanting? It just drives me nuts. Leeds were rattled by the goal and palace surged forward looking for a second.  The fair haired Jonathan Parr cut inside and screamed a shot at goal.  Kenny palmed it away.  Peltier was struggling to cope with Murray so Lees took over the responsibility with some success.

As the game headed for half time Leeds so nearly pulled one back.  Morison, having a much better game than recently, slipped a lovely ball through for Green who's shot was saved by Speroni........the ball rolled enticingly across the open goal...............Varney slid in and beat Speroni but a Palace defender cleared off the line. Bollox.  Half time 1.0 to Palace. The home side had clearly been the better of the two sides but Leeds' determination and pressing had kept them in the game. Zaha had shown touches of class but Byram had kept a tight hold on him.  The half time scrum for the toilets was made doubly difficult by pedantic stewards refusing to use an ounce of common sense in trying to sort the situation out. 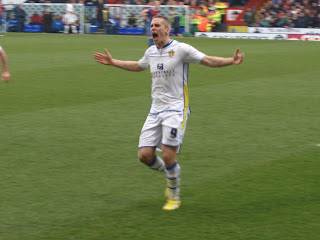 Leeds were one down in a game they really needed to win.  This was going to be a tough half.   within minutes of the restart the step over king, Mr Zaha, should have killed the game but he blazed his shot high and wide when he only had Kenny to beat.  I don't think he'll be sending that clip to the Theatre of Shite for Sir Alex Rednose to assess. Leeds were hanging in there and had their own opportunity to pressurise Palace when Ross Mac struck a free kick just wide. Leeds were starting to have some joy with balls played beyond the Palace back four for Varney and Morison to run onto and it is from one of these runs that Varney picked up a yellow card for diving as he pirouetted into the air after a challenge in the box.  He didn't let this bother him though as minutes later he ran onto a similar ball and pulled it back for Morison who coolly slotted the ball home past a despairing Speroni.  1.1 and the away fans exploded with delight. Against the run of play maybe but just reward for Leeds never say die mentality. 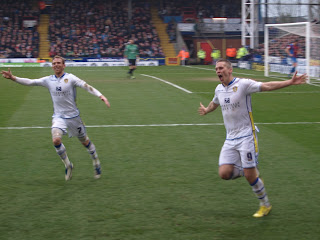 The goal fired up Palace though and they were soon testing the creaking Leeds back line. Warnock brought down Zaha as he sprinted away from the defence towards the goal.  Our new hero at left back received a yellow for his troubles as the home crowd bayed for a red. Shots were now raining in on Kenny's goal but the Leeds defence held firm. then as the clocked ticked towards 70 minutes Leeds were in front.  A long clearance from Kenny found Morison outpacing the home defence to slide the ball into the Palace net. Palace 1.2 Leeds and pandemonium in the away end as the long suffering away fans celebrated an unexpected lead.  But could we hang on? The repetitive chant of "Steve Morison" cascaded from the massed ranks of Leeds fans. "I knew he'd come good" said one fan behind me with his tongue firmly planted in his cheek. Suddenly the ex Norwich, Millwall and Stevenage player had captured the attention of the harsh Leeds critics for the right reasons. 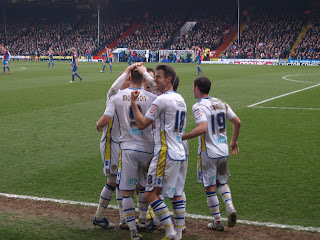 The game entered the final 10 minutes with Leeds holding a precious lead.  "3.1 is still on" I reminded HC and then nearly had a heart attack as Morison glided into position and pulled back a lovely ball to Ross Mac on the edge of the box who's shot was inches wide of the post. Just 6 minutes remained when Delaney delivered a perfect ball to Murray who was somehow free in the box and he nonchantly swept the ball into the net past Kenny. 2.2. Not again.  Just like Wolves and Leicester we've conceded late in the game.

Habibou, Austin and Hall came onto to try and regain the lead. Austin had one barnstorming run before losing the control of the ball as the game ended 2.2.  In the end a very entertaining game and a well deserved point. Morison silenced his doubters with two classy finishes and claimed the man of the match award. Overall a good team performance and more signs that Warnock's team is gelling better as a unit. We really needed a win to close the gap on the top six but five points out of a possible nine this week is not a total disaster against three tough teams.

The journey home was accompanied by the Steve Morison chant where ever we went, Victoria station, Kings Cross and carriage C on the 19.48 hull trains back to Selby. Funny how he was becoming the new Billy Paynter at Leicester but now inspires comments such as "who needs Becchio"? Harsh that I thought.

In the end another brilliant away day in London.  The Leeds fans were in good voice from start to finish.  I just wish we could have held onto the lead.  Now how many time shave I said that this season? A final thanks to Hull trains for selling us the wrong Travelcards for the underground and then refusing to refund them on the train home.  "Ever so sorry but you'll have to send them back to head office to get a refund" the less than helpful ticket inspector told us. And they say that customer service is dead in the UK!

Still only 6 points off the play off's with a home game against the Posh to come on Tuesday.  More goals for Morison?  I do hope so.

Posted by Andrew Butterwick at 00:06